103-Year-Old Woman Gets a Sweet Surprise for Her Birthday: A Cat That Needs a Home 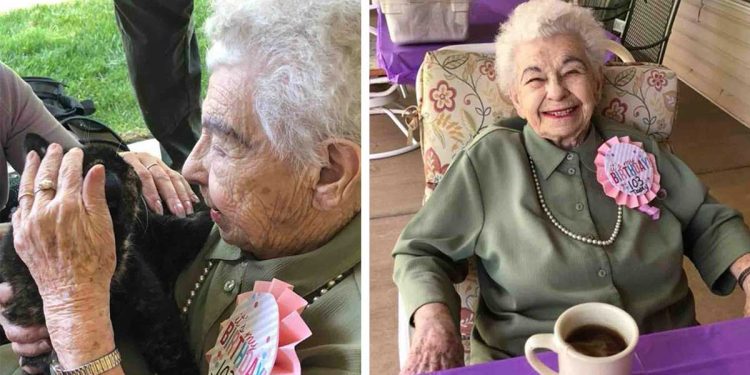 This 103-year-old woman gets the best surprise for her birthday, she now has an adorable cat who needed a home as a companion.

Lillian Grant turned the incredible age of 103, and of course, she received more than a surprise party to commemorate the day. Lillian lives in a retirement home in St. George, Utah, where the staff had hosted a barbecue to celebrate her birthday.

When Debbie Presland, the manager of Ridgeview Gardens Assisted Living, asked the woman what she would want as a present if she could choose one thing in the world for herself, Lillian had no hesitation in wanting a cat as sweet as her deceased pet.

After hearing the woman’s touching wish, Debbie decided to make it come true. With the help of her brother, Joseph Harradine, Animal Services Officer at St. George Animal Shelter, they took it upon themselves to find a feline companion for Lillian.

The shelter chose Marley, a 9-year-old cat, who had to be abandoned by his previous family when his caretaker moved into an assisted living facility that didn’t allow pets.

We wanted to make sure it would work perfectly. If (Lillian and Marley) hadn’t connected, we would have tried another chat.

Just before sharing the birthday cake, Debbie told Lillian they had an extra special surprise just for her. So, they introduced her to Marley, and the older woman immediately went to hug the kitten who accepted her almost immediately.

At first Lillian didn’t seem to quite understand what was going on, she thought Marley had just visited her for her birthday party. But then Debbie explained that Marley was her cat and the happy woman couldn’t believe it.

The new friends are inseparable now, though all Lillian could say after welcoming Marley into her new home was that she wanted to leave the party to visit her new pet. He even calls Marley “Sammy”, in memory of the late feline he misses so much.

Of course, before giving Lillian a live animal as a gift, the shelter needed to be sure that Marley would have a home for the rest of his life, Joseph explained that was in case something happened to the woman and that she couldn’t take care of Marley anymore, so Debbie agreed to become the cat’s sitter.

Debbie says she couldn’t be happier to brighten Lillian’s life with this special gift.

Just seeing his reaction made me gasp. In fact, he had tears in his eyes. It was very sweet.