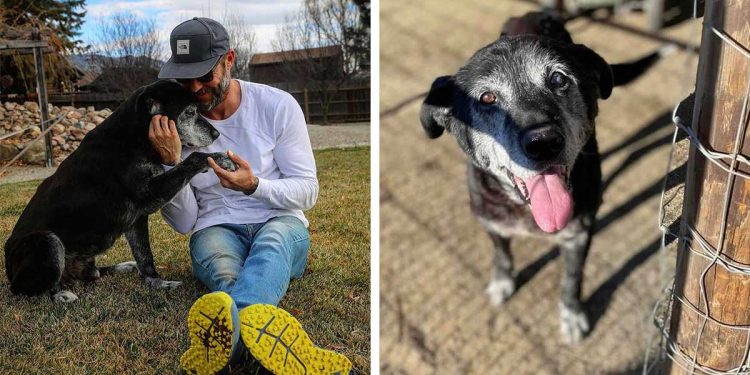 One thing we have to deal with when we have a dog is that they don’t live as long as we would like. They accompany us in part of our life, but they spend their whole life with us, which is why we always hope to give them the best life possible by our side. We know very well that they deserve everything.

So thinks Zach Skow, co-founder of Marleys Mutts and the Pawsitive Change Program, who came across an older dog named Henry at the rescue center in Tehachapi, California. The 16-year-old dog looked a little scruffy, had rough gray patches on his coat, and was no longer as agile or energetic as other dogs at the shelter.

Zach was really moved and couldn’t stand the thought of this dog spending his last years like this. So without hesitation, he volunteered to be Henry’s adoptive father in March 2021. His goal was to make sure Henry met new people and also created new happy memories.

Due to his age, Henry struggled to walk fluently for a while, but surprisingly the gentle dog worked hard to draw energy from within and it wasn’t long before they can see him pacing and running around Zach’s yard like he’s a puppy. His adoptive father could hardly believe it.

In addition to age issues, Henry discovered he had testicular cancer while at the shelter. Fortunately, the surgery helped him overcome the disease. This dog was really hanging on to keep living.

Zach didn’t expect Henry to be with him for many more years. He guessed that due to his age, the dog was still a few months old. But the dog defied those odds day after day and, to Zach’s surprise, he looked younger every time.

As happy as he was with his progress, Zach couldn’t stay with Henry any longer, so he set about finding him a forever home. His goal, after all, was to give this sweet little dog the best years possible.

Of course, with this energy and joy that characterized him, it was not difficult for Henry to find a home despite his age. His new mom loves him madly and takes care of him every step of the way, even sharing everything they do on her own Instagram account.

Henry still has enough energy to walk around and enjoy the sun. She loves the outdoors and knows she has a loving family and a huge following on social media.

Henry went from an elderly dog ​​forgotten in a shelter to a beloved pet, and it’s all thanks to Zach, who saw Henry in that shelter and knew he still deserved the best in life.