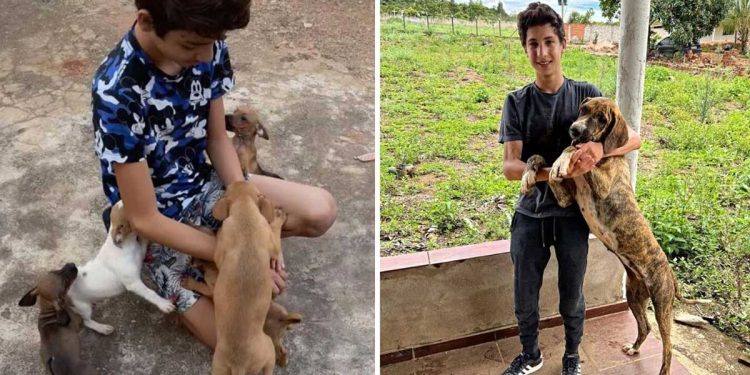 A 17-year-old young man decides to open a shelter to help abandoned and needy animals in Anápolis, Brazil.

Eduardo Caioado, 17, from Anapolis, Brazil, has always been an animal lover. He is obsessed with helping animals in need and since the age of 9, he has been rescuing abandoned animals in his town.

A month ago, with the support of his family, this young animal keeper realized his dream and opened his own animal shelter called Institut EduPaçoca.

I’m trying to make this world a better place. And I know that the miracle that people ask of God is in the action that is done every day, whether it is feeding a stray dog or helping an elderly person by writing a few letters.

A young man creates a shelter for abandoned animals

This year, I realized a big dream of building my institute. I rented a house and I have sponsors who help me with expenses. I go there every day. Sometimes I hitchhike or cycle for 30 km, but I never complain because it’s always what I dreamed of.

I don’t want a dog deposit; I want a house. I want them to know that even if they’re not adopted, they’ll be with me until they get old and die.

The young man added that the idea to open the shelter was born in March, because he felt the need to help more abandoned dogs. Feeding homeless dogs, Eduardo realized that more and more appeared every day, and thus managed to collect 10 dogs, who decided to follow him.

The area where he lives is very cold, and usually dogs left on the streets die of hypothermia or some other illness.

There are no public policies that help needy animals in the city, so the young man decided to do his part.

The animal shelter is characterized by being a recreational nursery, where rescued dogs perform different activities and prepare for adoption.

I want the Institute to become much more than a refuge. In the recreational daycare format, I want them to be happy and healthy so they can be adopted.

Also, Eduardo says he does a special job with their broken hearts, as most of them arrive scared, scared, hurt and without any confidence. As the dogs spend time in the shelter, Eduardo teaches them that they can trust him and that he will be there forever.

During these years of feeding animals on the streets, I realized that they had feelings very similar to ours. There is a dog named Baiano who always brings me gifts: a bottle, a bowl or a leaf. I had the idea to create a different place. A nursery with colors, toys, hobbies, activities, music, dancing, theme parties and birthdays.

To date, the animal shelter houses 22 dogs and 4 cats in its facilities, all of which were rescued by Eduardo. Although I would like to help more dogs, the institute is still very small and can only save those who need it the most.

The biggest challenge is choosing who to take and who stays on the streets. The space is still small and I can’t cope with all of them.

For now, he is filled with satisfaction to be able to observe the joy, the confidence and the grateful eyes of these animals that he can help.

Although the institute is a dream come true, it is still a big challenge, but Eduardo is sure to continue his work. In the future, the idea is to be able to expand the institute, both physically and economically, in order to be able to save more old and rejected animals.

The ultimate goal is to find families for them, but until then, make them feel like they already have a home. I not only want to heal the animal’s physical wounds, but its wounded souls.

VOAA has launched a campaign to help raise funds for the EduPaçoca Institute, to reform and expand it. The funds will be used to cover the costs of food, cleaning products, veterinary care, rental of new spaces, expansion and renovation of the site.

Eduardo wants to build a better structure and create additional houses to prevent the dogs from freezing to death and to separate the older ones from the puppies. All these adjustments will allow a better quality of life for these rescued animals.

Eduardo is well known in Brazil for his good heart and social activism, but this isn’t the first time he’s made the news. At 15, he was chosen among the 50 inspiring young people of the UN, thanks to a project to reuse rainwater for an ecovillage.

It also became news that even though he was very sick and hospitalized, he wanted to find foster homes for some homeless cats from the hospital. In addition, last Christmas, a Christmas campaign was invented to collect gifts for more than 50 elderly people in a nursing home in their city.

At 16, he became popular for hosting a sleepover for his 88-year-old great-grandfather, showing his virtue by helping others. This enthusiastic boy, passionate about making Brazil a better country, constantly uses social media to discuss topics of interest.

He frequently discusses issues related to human rights, public policy, animal welfare and environmental issues, which need to be improved in his beloved country.

Eduardo has over 171,000 followers on Instagram, you can follow him to keep up to date with his animal welfare projects.