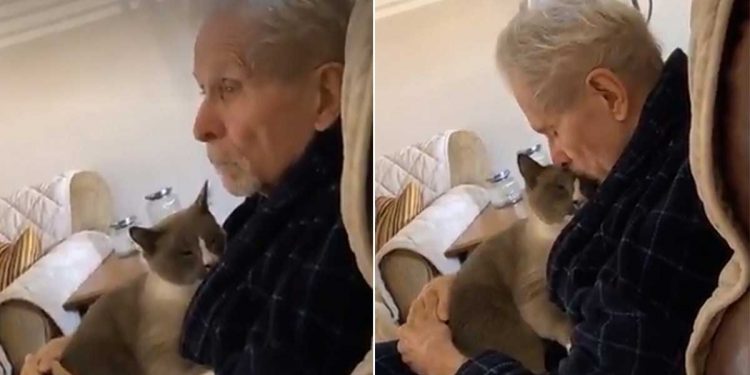 The sweet cat spends all day comforting his father who has Alzheimer’s, since Mooshu came home he tries to spend a lot of time with him.

Bob is a retired veterinarian who has always been connected to animals, as they have always given him great satisfaction and happiness. But Bob’s life changed in 2009 when he was diagnosed with Alzheimer’s disease, since then his life has been a constant struggle.

It’s hard to find something that makes Bob happy, nothing seems to make him happy, but luckily everything would be different with his cat Mooshu.

Mooshu is a friendly, extremely social and cuddly cat who loves being around people and snuggling up to them.

The cat joined the family in 2013, Bob, was already suffering from the disease, and it didn’t take long for Mooshu to realize how much he needed it.

Bob kept asking for a cat on his lap, so I kept picking up Mooshu and putting him on Bob’s lap. Now he’s there all the time and sleeps in his arms at night.

Husband and wife have another cat named Norman, but for some reason his sick father has a special bond with Mooshu.

The nice cat seems to know what’s going on with his father, he has become his little protector and watches him wherever he goes.

I think he knows his dad needs him more now than he used to. When Bob takes a shower, it’s Mooshu who meows and rubs against him like he’s trying to make sure he’s okay. good.

The cat tries to share as much time as possible with its father, but sometimes it has to get away to carry out common feline activities.

Patricia noticed how upset her husband gets when Mooshu isn’t around him, so she had a brilliant idea.

Bob was very happy with Mooshu on his lap and kept him so calm he wasn’t happy unless the cat was there. I had to buy him a robot cat to keep him company when Moosh was doing stuff of cat.

At first, Mooshu rejected the company of the robot cat, he didn’t assimilate that he was also in his father’s lap, but in the end he accepted it.

Now Mooshu can go off to explore and play in peace, as his father enjoys the robot cat’s company while his best friend decides to return.

Having Alzheimer’s isn’t easy, some days are harder than others, but as long as Mooshu is by Bob’s side, there’s nothing they can’t get through together.

Mooshu is the only thing Bob still loves. He was a veterinarian, so contact with animals is very important to him and Mooshu gladly provides it all the time.