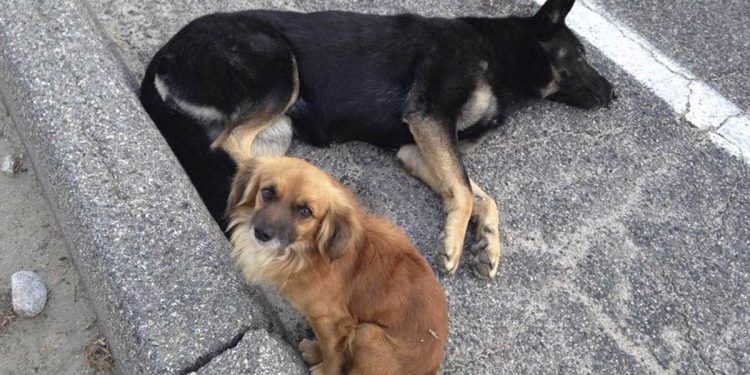 Dog protects her pregnant friend, who is badly injured on the side of a road in California, until help arrives.

Lying on the side of a road in Moscoy, California, was an injured German Shepherd dog who needed help, next to her was her best friend, a dog who never abandoned her. Marley was in poor condition, and his friend seemed to understand everything, so he remained seated next to him while help arrived.

Time and people passed, but no one was born to help the pair of animals, until finally the wait was over.

Faith Easdale, rescuer from Dream Fetchers: Project Rescue, received the information about the situation of these two furry animals and immediately went to help them.

Dog does not separate from his pregnant friend until help arrives

We got a message that she was lying on the side of the road. Marley was in terrible anguish and pain, breathing heavily. We weren’t even sure if she was going to make it.

Upon arrival, they noticed that Marley’s partner, whom they named Murphy, refused to leave her side, and was following all of the rescuer’s movements.

She was very heavy and difficult to move, but we did it. Murphy didn’t leave her side on the street.

Once the dog was brought to safety in the vehicle, her partner did not hesitate to board the car and lay down resting her head on Marley’s big belly.

The dogs were so calm, they seemed to know that the worst was over and that they were safe, now they just had to recover.

The rescuer took the dogs to a veterinary hospital for examination, Marley’s X-rays revealed several broken bones and an unexpected surprise. Marley would soon become a mother, as she was pregnant with 11 beautiful puppies.

While they spent the first days in the shelter, Murphy continued to accompany her friend closely, but slowly he realized that she was in good hands.

Faith could see that they were no longer so close, so she decided to start searching for a good home for Murphy.

Despite her conditions, Marley gave birth to 11 healthy puppies from her, and even though she had her legs in a cast, she seemed determined to take care of her babies.

Marley’s recovery took two years, but with the invaluable help of her foster mother, the vet, and various caregivers, the dog is completely cured.

Marley is as sweet and beautiful as the day we brought her home. She plays like she never had a broken bone.

Marley’s rescuers are happy to learn that she is fully recovered and that her puppies are doing well.

She was special and we all knew it. Today her babies are adults and Marley is loved and appreciated.

A story of a strong mother, who in the end did everything possible to preserve her life and that of her cubs.