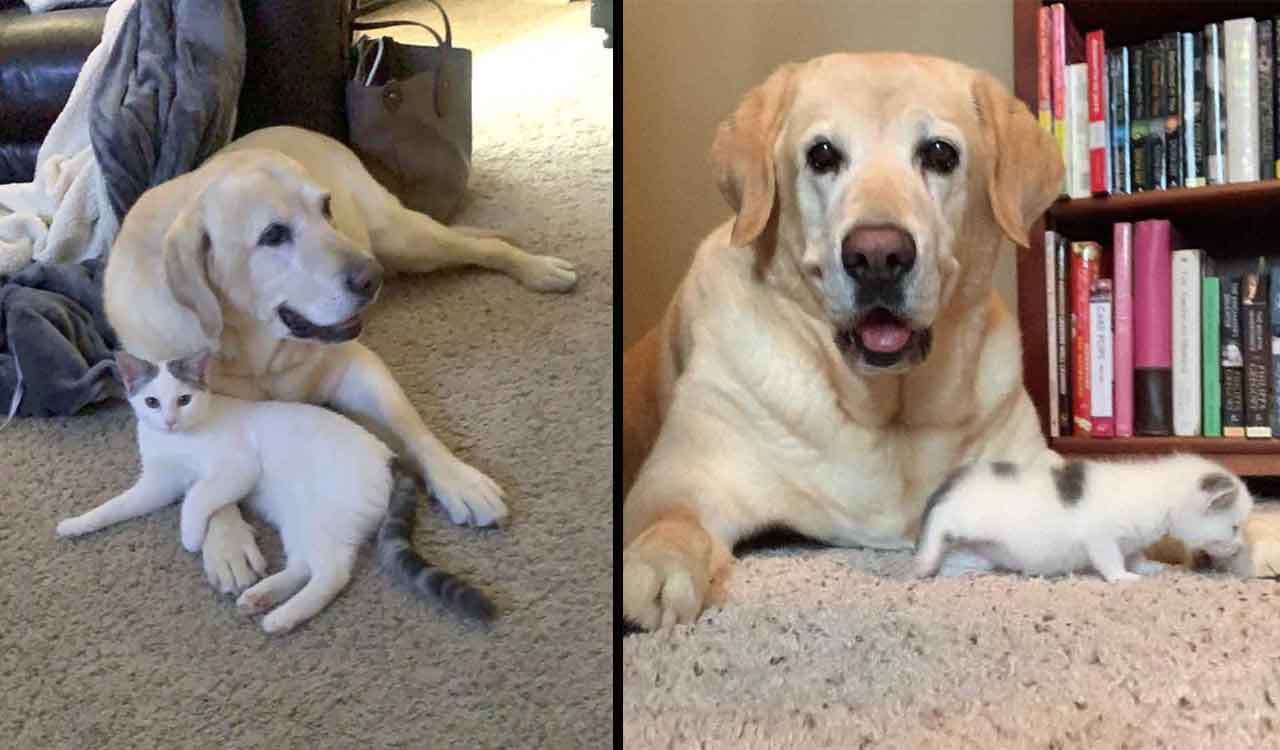 A dog takes care of an orphan kitten who was found on a farm, since he came home he is his company, now they are inseparable.

Thanks to a wonderful family and dog, an orphaned kitten has found a loving new home. The little girl was wandering alone in a farm, exposing herself to the dangers that a feline of her age can have.

Morgan, the farm owner and four-legged mother of 5, had no plans to get a new cat as well, but fate brought her home.

Mrs. Morgan had heard the mewing coming from outside her farm, but it was nearly impossible to find the cat.

This dog takes care of an orphan kitten

We tried to call her but couldn’t find her in the thick layer of trees behind our farm. We took one of our big cats to where she was crying, and he sniffed her right away. She was in a little tree stump.

After finding her, they made the decision to leave her there, as they thought maybe her mother would come back and take her home.

The little girl was watched from afar, after several hours of waiting, they knew they had to intervene, because it was very risky to leave her in the open air.

When it was dark, we were nervous for her because we live on a farm where foxes come a lot. So I went outside and brought her inside. I couldn’t see anything and was covered in fleas.

After taking her home, they gave her a well deserved bath and removed all the fleas from her fur and named her Polly.

Paxton, the 12-year-old dog who lives in Polly’s new home, heard the kitten’s cries and immediately came to see her. From that moment, the nice dog took Polly and started to take care of her, it was as if he wanted to adopt her and take care of the little girl.

The kitten felt attracted to the furry one, felt safe, snuggled up to him, stopped crying and fell asleep peacefully.

Polly never wanted to be lonely again, and from now on Paxton would never leave her.

Morgan took it upon herself to bottle feed her for several weeks, until she was ready to be weaned. When it was time to eat, Paxton waited patiently watching her kitten eat, when it was over the dog began the cleaning chores.

Before she could take a bath, Paxton would clean all the milk off her. He taught him many dog ​​things, including the barking sound he makes.

Now Polly follows her friend everywhere, they have become inseparable, it’s as if she has become her little shadow.

The little orphan kitten has grown into quite a rambunctious cat, Paxton lets her play with her tail and never tires of her antics.

Polly is now 5 months old and Paxton is almost 13 years old, their bond has become so strong that it is almost impossible to separate them.