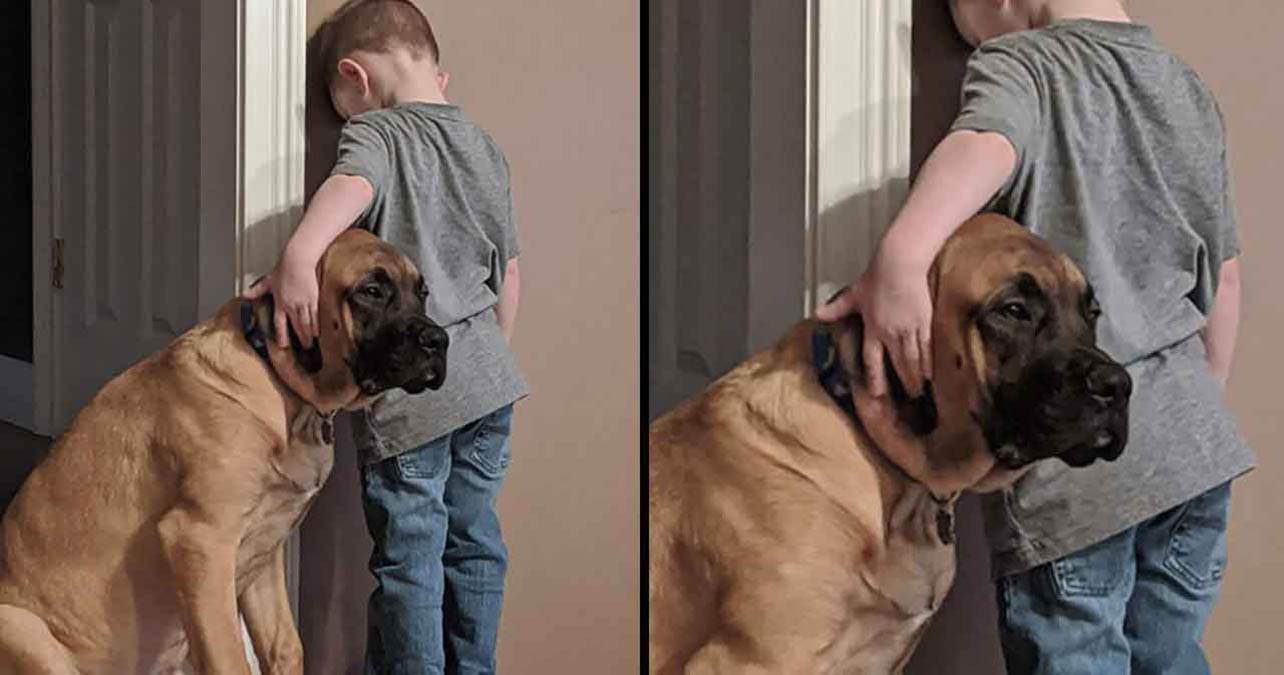 A loyal dog keeps a company of children for the duration of the punishment. He does not want to leave him alone and is his best friend.

Dogs are really the best friends a human can have, we often know stories that confirm what was said, like in the case of Peyton, a 3 year old boy who fought with his sister, so his mother, Jillian Marie Smith, had decided to punish the boy.

Because of her misdeeds, the mother decided to punish the child by giving him two options, by going into the bedroom or by undergoing a “punishment time”.

The boy decided to go to his usual place, where he placed his head against the wall to await the hour of punishment.

However, something surprising happened, a few minutes passed when his best friend, Dash, an English mastiff, decided to join the boy. His four-legged friend was determined to accompany him throughout his punishment, showing that friends are in good and bad times.

Although it was a punishment for Peyton, Jillian captured the moving moment in his camera and decided to post it on Facebook.

“When you’re in the punishment corner, but your best friend won’t let you serve your time alone.”

Now, the photo has been shared more than 46,000 times, and the boy’s mother has accompanied the publication saying he couldn’t get mad at his son for a long time.

“I couldn’t be very angry because it was so cute how Peyton wrapped his arm around Dash. When Peyton had to go out, I think Dash knew he needed his friend. “

There is no doubt that this was a true act of what true friendship means, demonstrating that dogs are loyal at all times.

This act of kindness is just one example of the impact Dash has had on his entire family since he came home.

Dash has made life happier for the whole family. Especially for Peyton. If you ask Peyton, Dash is his friend.

Fortunately, the “time out” for the two of them quickly ended, allowing them to resume their daily routine of games, cuddling and fun.

While it is most likely not the last time Peyton is in trouble and therefore receives a punishment, it is reassuring to know that his best friend will always be by his side.