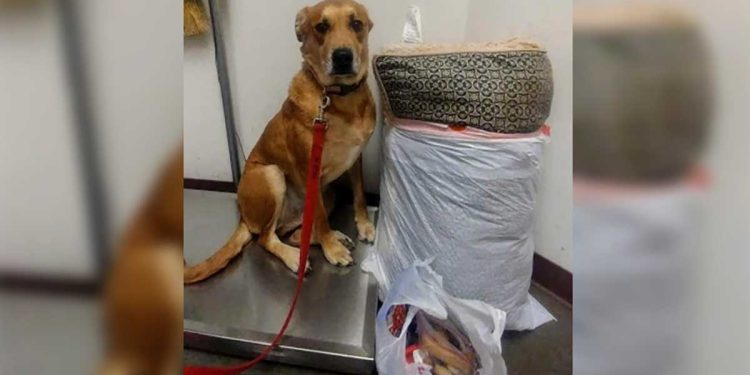 This dog was abandoned at the shelter with his bed and all his toys because his family could no longer take care of him.

Wall-E is a 6-year-old dog who was adopted in 2015 by Maricopa County Animal Care and Control (MCACC). The new family took him home, took care of him and pampered him with treats and toys. Then one day, three years later, Wall-E found all of his stuff bundled up in two plastic trash bags.

The dog couldn’t understand why he and his things had been taken back to the Arizona shelter, or why his owner was crying when he said goodbye. All Wall-E knew was that once again he was alone and heartbroken.

Apparently, Wall-E’s family didn’t have time to take care of him anymore and that’s why they left him at the shelter.

Abandoned dog with his bed and toys

He was delivered by his family because they didn’t have enough time for him. I was very scared. In his kennel he was barking and barking.

The shelter was far from a dog hotel, so Wall-E couldn’t have his toys and bed in his kennel. He was confused and depressed, far from the comfort of his old life and the people who had promised to love him forever.

When adopters walked past his crate, they couldn’t see past the defensiveness that hid the once happy dog. But the shelter workers knew there was an incredibly sweet dog behind bars, waiting for someone to see the real Wall-E.

Because of his attendance at the kennel and his evaluations, he was fired by many people. [But] with the volunteers he was very nice and playful and loved to ‘zoom in’.

Wall-E waited for a family in the shelter for two months, but no one showed up. It was then that Jordan had the idea to tell his story to see if the dog could find a new family. And it worked.

About six volunteers and I run the [Facebook] page and the network for the shelter’s dogs. We knew this image would be heartbreaking and get a lot of attention, but little did we know it would explode like it did. A lot of people were interested in him.

Lynn Lee saw the photo of the sad dog and was so moved that she immediately went to the shelter to meet Wall-E in person. She brought her own dog, and the couple hit it off so well that the day after Wall-E’s photo was posted on Facebook, he was already on his way to his well-deserved forever home.

Lynn wrote in a comment accompanied by a video:

A simple photo and social media post brought Wall-E here. Together, we can truly make this world a better place, one act of love at a time.

They’ve been amazing. Wall-E gets along great with the family, loves dog parks and cuddles.

Now with his new mom, Wall-E is letting his personality shine through and he’s quickly getting used to his new dog bed.

Wall-E is a happy dog ​​again.