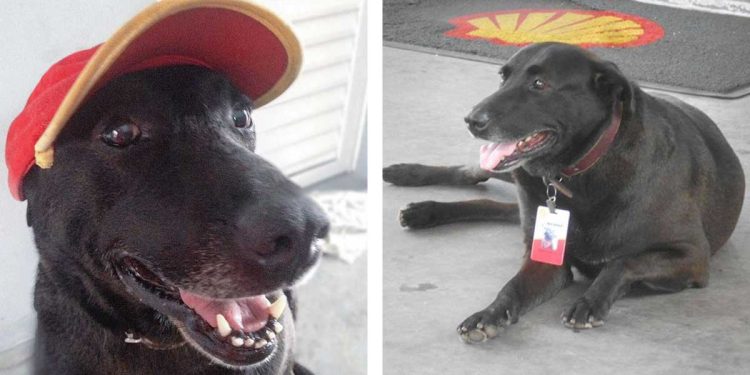 The dog was abandoned at the gas station by his former family, but Sabrina and her husband changed his life forever.

Sabrina Plannerer and her partner purchased a gas station under construction in the city of Mogi das Cruzes, Brazil. It was then that the dog was discovered wandering the site, having been abandoned there by his former family. He was too scared to come out, but the couple did something very beautiful for him.

The dog was called ‘Negão’, and although he is not a normal gas station attendant, he is certainly one of the nicest. Instead of trying to scare Negão back then, as some people would have done, they helped him.

We immediately adopted him and gave him the care that all animals need. We took him to the vet to get him vaccinated and dewormed. We bought him food, a kennel and a leash to walk him.

When the gas station finally opened, Negão even got a job, and of course an employee card to prove it.

Sabrina didn’t know at first how Negão would react to the hustle and bustle of the gas station he made his home in, but the dog is happy and acts natural providing world-class customer service and always with a big smile on his face. . .

Negão waits for people to arrive, then goes upstairs to say hello, seduces them with his charms. Clients love it. Some people even bring him toys.

While it’s true that Negão really loves his job at the gas station, there’s more to his life. Every day, Sabrina or another employee takes Negão for a walk around town to exercise.

As the gas station is open all day, there is always at least one colleague nearby to make sure Negão is happy and safe.

Sabrina says she hopes Negão’s story can influence other establishments to hire a canine employee as well. Well, many dogs cannot find a conventional home, so just like Negão, another dog can also be happy in a home where he meets many people on a daily basis.