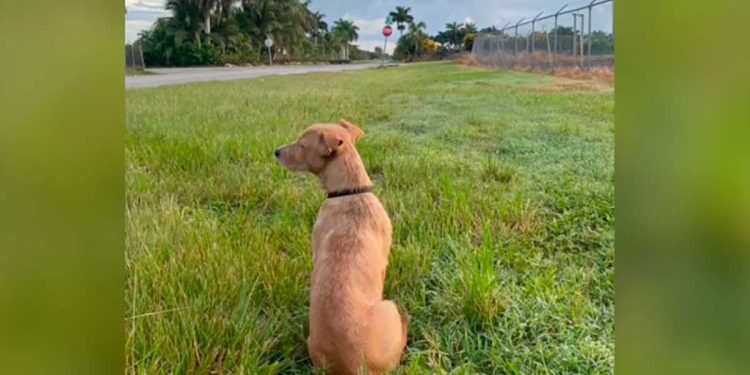 Driving through the streets of South Miami on her way home from the gym, Adriana Figueroa was heartbroken to see a small brown dog on the side of the road.

As he approached, he noticed that the dog was staring at the horizon, as if waiting for his old family’s car to appear any moment in the distance. It seemed that the little one had been abandoned there, and he still had hope that they would come back for him.

Unfortunately, this wasn’t the first time Adriana had seen an abandoned dog in her neighborhood. In South Miami, where he lives, it is common to see abandoned animals. And that’s why two years ago the woman started getting involved in rescues.

An abandoned dog waits on the road to be picked up

“I always find abandoned dogs. I always have dog food in my car, and I recently put it in a medium-sized box.”

It took Adriana two hours to gain the trust of the dog she named Melo. She patiently coaxed him into the safety of her car, and at first, he avoided the woman’s care and refused to eat. But after an hour, Melo’s caring side began to shine as he began to trust Adriana.

“Every time I pass by that corner, I remember seeing him there, with his scared face, I knew I couldn’t leave him there, after an hour of trying I was finally able to gain his trust and bring him home to find him a home.

After researching his owners and determining that the dog had indeed been abandoned, Adriana decided it was time to start looking for a permanent family for him.

Fortunately, the search for the perfect home for Melo didn’t last long. Very soon someone saw a photo of Melo and fell in love immediately, so he contacted her about adopting her.

Once settled into his new home, Melo began to enjoy all the comforts that a loving family affords him. Now you can rest easy knowing that this family is forever and will never leave you.