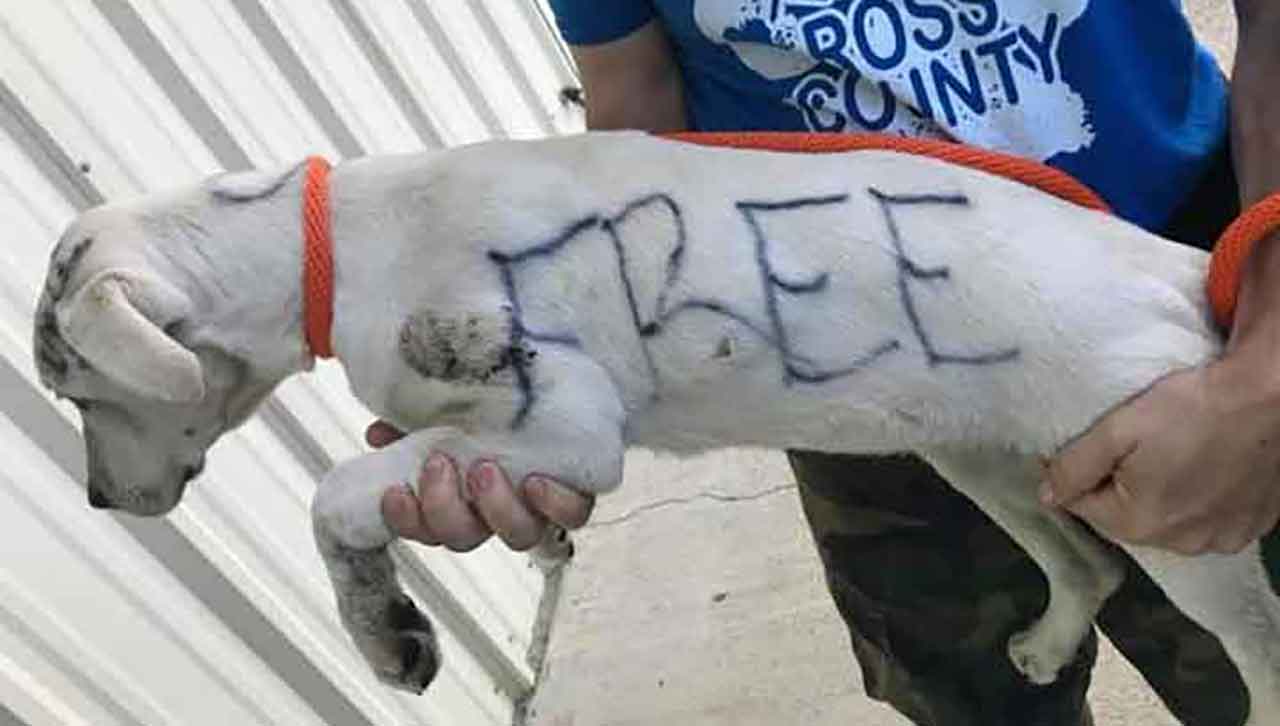 Visitors to a park in the city of Chillicothe, Ohio, made a sad discovery. Abandoned in a locked metal cage left on the ground, a young puppy was alone and upset.

The only signs of his owner were the handwritten messages scribbled on his skin with permanent black marker.

On his side were written the words “Free” and “Good house only” while on the other side was written “I am a gift from God”.

After finding the puppy, people immediately called the police and she was taken to the Ross County Humane Society shortly thereafter. According to the Dodo, seeing the puppy, Monica Denney, the director of the kennel, said:

We were all pretty stunned about it. I worked here for three years and I saw a lot of terrible things … but I never saw anything like it

Fortunately, although covered with marker, the five-month-old puppy appeared to be in good health. The shelter staff decided to call it Marvella, the name meaning “miracle”.

After a good scrub, the marker was finally washed from her fur and soon enough, Marvella straightened up and finally began to live the puppy life she deserved. She is now ready to be adopted and Denney is certain that it will not take her long to find her at home with a welcoming family, while a “crazy” number of adoption applications are already being received. Denney said:

SHe is a very kind and friendly dog. She did not deserve to be left like that. No animal deserves it

A police investigation was opened on its original owner, who was later found and will likely be charged very soon. Denney said:

At first, we wondered what kind of person would do that. I think maybe they did not think we would meet with the dog and share his story as widely as we have done. People across the country now know her

The Ross County Humane Society is pleased to announce to everyone that Marvella, the young puppy found in Yoctangee Park, abandoned with a permanent marker message written on her, has been passed!

After reviewing the hundreds of applications we have received from across the country, Linette Wrightsel and her family will give Marvella a loving and stable home. We would like to thank Brothers Pressure Washing & Window Cleaning for making a donation to cover their adoption costs, as well as the entire public who donated it!

Remember that in any shelter, there are dogs that have been given as “free” and that are waiting for their forever home, just like Marvella. Please, support your local animal shelters and adopt them, do not buy.