Adopted Boy Saves Old Dogs Who Need Homes Like Him 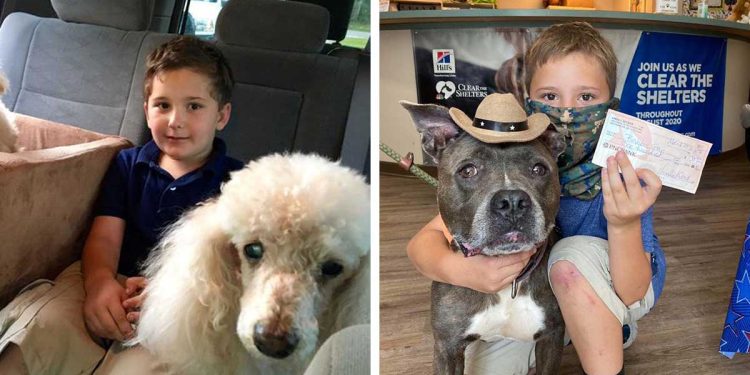 Robbie has been tasked with spreading love to senior puppies who haven’t been able to find homes because he identifies with their stories.

Robbie Gay is a 9-year-old boy from Palm Coast, Florida who regularly visits the Flagler County Humane Society to help older puppies who are less likely to be adopted.

The little boy says there’s something about these animals that he loves, and it’s because he’s been through a similar situation and sees his story reflected in them.

Robbie was adopted by Maria and her husband Charles two years ago. He now lives very happily, surrounded by lots of love, but his past has been very difficult; He was even hospitalized twice for brain damage due to the mistreatment he suffered.

According to Cbsnews, Maria said:

He knows what it’s like to not be loved and cared for. He’s the most optimistic, optimistic and caring child even though he has absolutely no reason to be that way.

The boy has always shown great strength and finds it difficult to express his emotions, but the sacrifice of his dog named Buffy has completely destroyed his heart. He wanted to hold her and love her until the last moment.

As he walked away from Buffy, he told Maria that he knows what it’s like to be unloved and uncared for, and that’s why he doesn’t want any animal or child to feel that.

María is very proud of Robbie and he is well aware that his life could have taken a different course, but good-hearted people have decided to give him the opportunity to be happy, that’s why he wants to follow the same path. .

Kind Robbie dreams of being able to help children who are not easily adopted due to their age, but until then he will continue to put all his effort into changing the lives of older puppies. He currently has six and loves them all immensely.

His latest adoption was of a Shih Tzu named Molly, who was left alone after his father moved into an assisted living facility.

Robbie volunteers for the organization and everyone admires his hard work. Thanks to him, many people have been encouraged to give older dogs a chance. This little guy is an example of life.