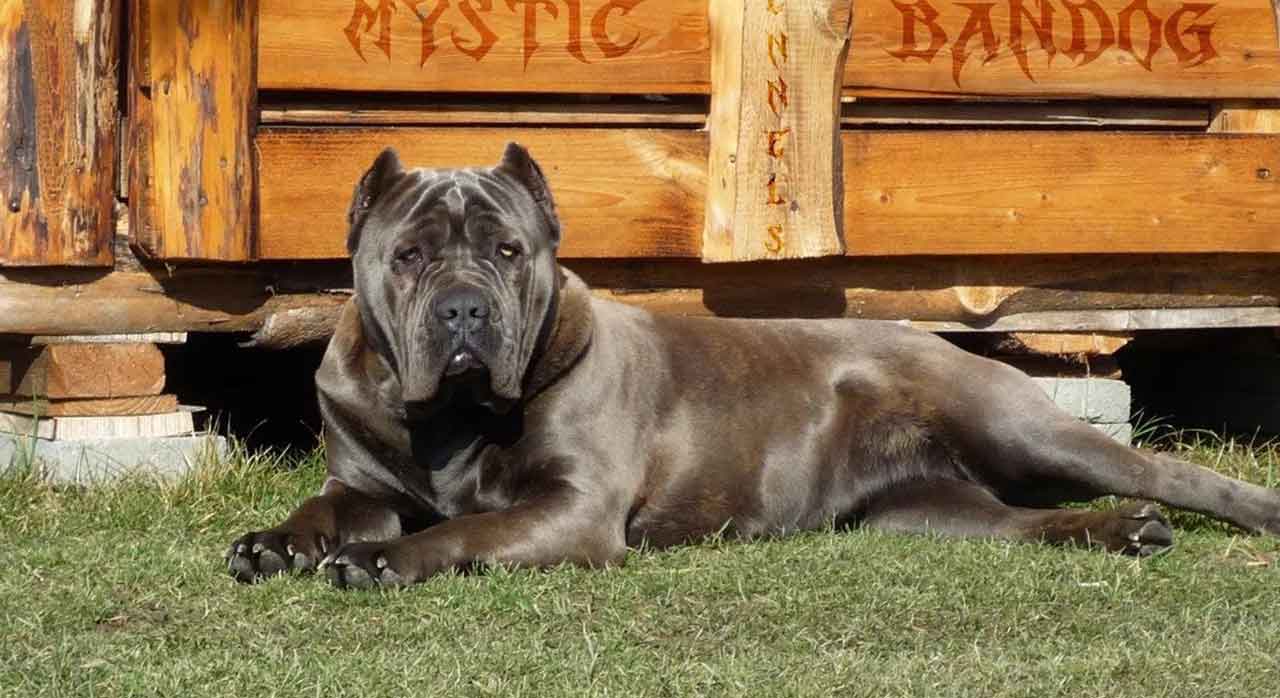 In addition to fighting talent, the American Bandogge ( also known as the Bandog ) has watchdog and security qualities. The mind, strength, and endurance of the animal make it possible to use it for service in power structures. The American Bandogge is not suitable for the role of companion. This is a serious, security, working breed.

The homeland of the American Bandogge is the United States of America.

This is a dog bred by crossing different dog breeds. The term “bandog” arose in the thirteenth century in Central England. This definition meant a mastiff dog, which was kept on a massive chain during the day and released at night to guard the property.

In the sixteenth century in the print media there are descriptions of bandogs. The authors presented to the readers a huge, aggressive, purposeful and dangerous dog – a thunderstorm.

The ancestors of the first American Bandogges were watchdog mastiffs, dogs that participated in bullfights, predators, as well as dogs that accompanied their masters in the Crusade.

In ancient times, bandogs were hunting, fighting, security, and workers. They differed among themselves in different sizes and colors.

Breeders for the improvement of the breed and for the creation of new varieties have conducted and are carrying out crossbreeding of American Bandogge with other dog breeds. But in any process, breeders sought to preserve and improve the main qualities: strong immunity, fearlessness, protective instinct, large dimensions, assertiveness and fierce disposition.

The main directions of selection of American Bandogges:

In the twentieth century (seventies), the American veterinarian Swinford undertakes to restore the purity of the breed American Bandogge. It was through his efforts that the exterior of modern bandogs was determined. In honor of this man, representatives of the breed are called ” Swindford Bandog “.

After the ban on dog fighting, bandogs are used as security, hunting, and guard dogs.

Physical characteristics of the American Bandogge

The American Bandogge has a strong physique, a powerful skeleton and well-developed muscles.

The neck is medium length, powerful. A massive head with a wide forehead rests on it. Ears are stopped, erect, acquire a triangular shape. Not cropped ears hanging.

Small-sized eyes set wide, slanting, dark. The look is wary, studying. The muzzle is not narrowed, elongated. The nose is large, dark, with open nostrils.

The jaws are massive. The fangs are large. The bite strength is 1180 N for young bandogs and about 1460 N for adult trained dogs. The capture is strong, but the dog does not hold it for a long time.

The American Bandogge’s back is flat, the stomach is tightened. The chest is wide, deep, and muscular. The limbs are strong, even, not too long, with well-developed muscles. The tail is thick, medium length. Worn overhang.

The coat is short, it does not protect the dog from frost. The hair is smooth, hard to the touch.

Character and temperament of the American Bandogge

In the family, among all household members, the bandog intuitively determines his master, he becomes the most powerful and strong-willed person. This does not mean that the dog will not obey the rest of the family, but with some indulgence and subject to proper upbringing.

The American Bandogge has an amazing feature. He is able to unravel the intentions of a person through movements, the timbre of his voice, facial expressions. If a person is aggressive, comes with bad intentions, the American Bandogge will attack immediately, without a roar, barking, in a word, without warning. Such a dog is an ideal watchman, bodyguard. With her appearance she is able to scare off robbers and other intruders.

The bandog usually does not show his mood, keeps his emotions to himself. Therefore, to crouch in front of the owner, to flatter to him can in very rare cases. Although each representative of the breed is individual in its own way, and its behavior largely depends on education.

In families with children a American Bandogge is not recommended. The dog treats kids loyally, but no more. He will not tolerate their pranks, children’s cries, laughter, running around can annoy the dog. Even if the pet is in a playful mood, it is impossible to allow games between a large fighting dog and a small child. An animal can inadvertently be harmful.

With other pets behaves condescendingly. He doesn’t particularly seek friendships, but he doesn’t like fights for nothing.

A bandog is a guard dog with large dimensions and excessive activity. Living in an apartment is not comfortable for him. The ideal solution is a private house with a private fenced area. In this case, the dog will be able to freely run around the site.

An ignorant person is sure that the bandog should be kept on the chain, based on the name of the breed, which in translation sounds like a “chain dog”. In fact, the content of the American mastiff on the chain is strongly discouraged. A chained American Bandogge become aggressive, malicious, it is difficult to establish contact with them, mutual understanding.

For a bandog, build a spacious aviary with a large booth in the courtyard. The booth should be insulated, as representatives of the breed cannot tolerate frost. After placing the pet in the aviary, do not forget to engage in its education and training. Every day, walk outside the aviary. He needs great physical activity, which will help reduce the level of aggression. Having thrown out the accumulated energy, the dog is more calm, balanced.

In the apartment, provided that it is spacious, a bandog can also be kept. In this case, from the first day it is necessary to accustom him to the place. Daily long walks are also important, during which we adhere to the following rules:

Caring for an American Bandogge is not difficult. Above all, do not ignore hygiene procedures. They will help maintain the health of the pet and the beauty of its exterior. It is important to regularly carry out the following actions:

We comb out short hair once a week, on the remaining days, using a massage glove, we clean the dog of dust and dead hair. Another such procedure is prevention against skin diseases.

We rarely swim. Approximately 3-4 times a year, or if absolutely necessary in case of severe pollution. Wipe the wool twice a week with a damp towel, cleaning it from pollution. After wiping, the coat acquires a beautiful shine and looks well-groomed. If a bandog lives in an aviary, rubbing should not be done in the cold season, only in the summer.

The eyes are the weak spot of the American Bandogge. It is important to examine them daily, noticing redness, inflammation or a large accumulation of secretions, we urgently turn to the veterinarian.

Wipe the ears with cotton swabs dipped in a special solution once a week.

For toothbrushing we buy special bones in a veterinary pharmacy.

Natural food is recommended for the American Bandogge. The dog should receive 4800 kcal per day.

Artificial feeding is also not prohibited. But you need to buy dry feed for a bandog only premium and not lower.

The average duration of an American Bandogge is 12-16 years.

By nature, it is a healthy breed with strong immunity. Health problems in most cases arise due to improper maintenance, care, nutrition.

You can avoid many diseases if you undergo preventive examinations with a dog every year in a veterinary clinic. It is important to carry out vaccination, deworming and treatment against skin parasites on time.

To treat any disease is easier and faster in the initial stage. Therefore, it is important to monitor the behavior of the dog. If her activity decreases, her appetite disappears, her coat grows dull, you should consult a veterinarian. Since such symptoms usually signal a disease.

The owner of the American Bandogge should know what diseases the breed is predisposed to:

There are many far from flattering reviews about American Bandogges. Indeed, there have been cases when fighting dogs have attacked people. The outcome of such attacks does not end well for a person. After all, even a defensive bite of a bandog is very dangerous, to say nothing of an attacker.

If you look, then in the unjustified aggression and attacks on people, animals are guilty not pets, but their owners. They simply failed to properly raise a dog whose ancestors were called gladiators.

If you took an American Bandogge to the house, from the first day begin to educate him. The puppy must learn that the main thing is the owner. Having felt the weakness, the American Bandogge will undoubtedly make an attempt to become a leader. It will be very difficult to return power to the owner.

An important rule in the maintenance of the American Bandogge is early socialization. The owner should carefully monitor the process of acquaintance of your pet with the outside world.

A special training course is a prerequisite for such a complex breed. It is recommended that you use the help of a qualified dog handler. Especially if the owner does not have the experience of training large, with innate aggression dogs.

In the absence of education, training, and improper handling of the American Bandogge , you risk raising an aggressive, uncontrollable and dangerous animal for everyone around you, including you.

Technically the term “bandog” meant a dog that was tethered by a chain (or “bande”) that would be released at night.

Representatives of the breed were once held with the help of powerful chains, there is a version that it was because of this that the name “bandog” arose.

In many countries, keeping and breeding the American Bandogge is prohibited.

The popularity of the breed American Bandogge is not at the highest level. It is recommended to buy a puppy in kennels with a good reputation. The character of the bandog is complex, so for a start, study all the features of keeping and raising such a dog, evaluate your strengths and capabilities, only then go for a puppy.

The main advantages and disadvantages of the American Bandogge breed are described below.