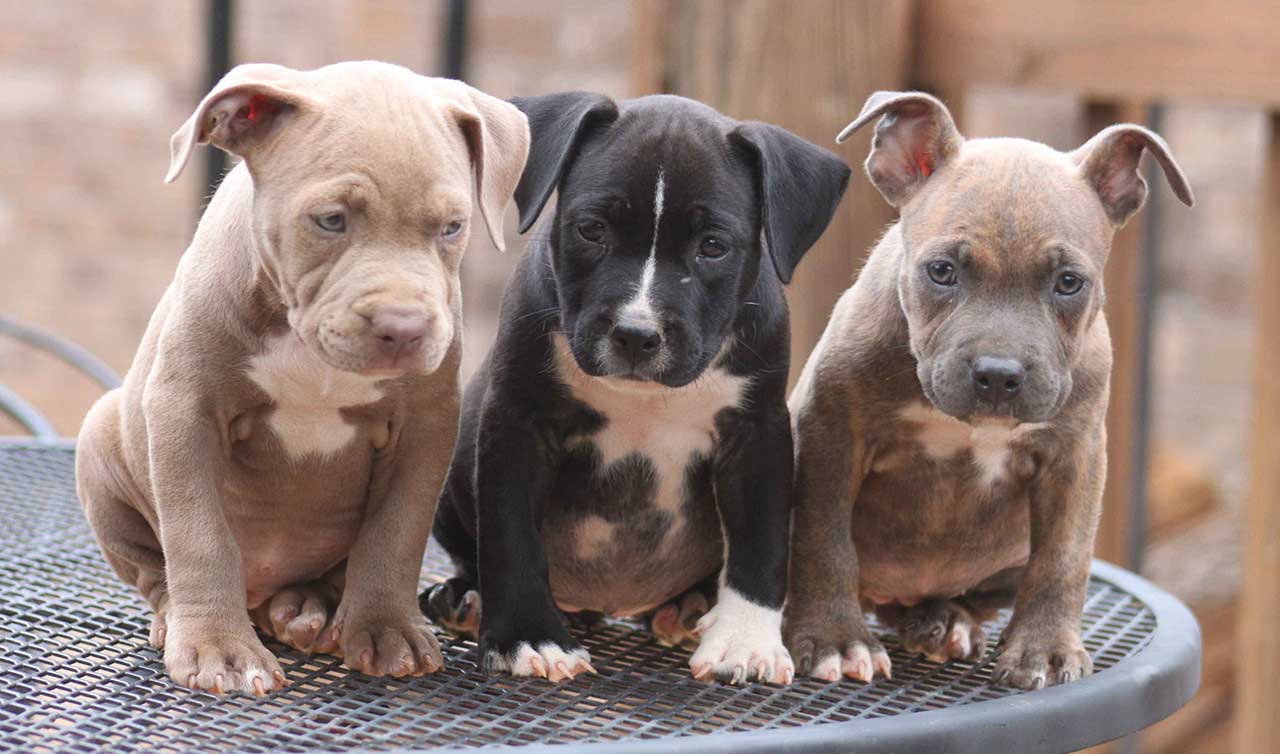 A mischievous prankster and at the same time wise, confident and balanced dog. With unrivaled strength and amazing dedication, this is all an American Pit Bull Terrier. The dog is famous for its excellent fighting qualities, thanks to which it is one of the best guards. Despite its strength, a dog, properly raised from early childhood, will never use its skills against a person. Pit bull puppies are very cute creatures that will leave few people indifferent.

However, do not forget that in just a few months, real fighters will grow out of amusing charms. Pit Bull Terrier is a breed of dog actively used to participate in dog fights. After the official ban on this kind of entertainment, the dogs continued to breed. An interesting fact is that the American Pit Bull Terrier is not recognized as an independent breed. The Federation of Cynologists has vetoed the right to participate in any exhibition events. All this does not prevent lovers of this breed from continuing to breed dogs. There are a huge number of nurseries offering to purchase a Pit Bull Terrier.

After the American Pit Bull puppy leaves his native nursery, he will need a little time to get used to a new place. He will definitely want to explore every corner of your home.

So, how to feed American Pit Bull Terrier puppies.

In the first month of life, they are fed with mother’s milk. The most nutritious and useful is the colostrum obtained by the cubs immediately after birth.

By the second month, the puppies’ diet is supplemented with cow’s milk, milk porridge, meat (both raw and boiled), vegetable soups.

A prerequisite is the addition of a vitamin-mineral complex to food.

You need to ask your veterinarian about what substances and how much to give to American Pit Bull puppies.

The amount of food consumed depends on the age, physical development and activity of the dog:

The nutrition of American Pit Bull puppies should be enriched with all the necessary substances necessary for their full growth and development.

Young dogs should be fed:

Dry food is issued, initially, as a treat, starting from the age of two months. Gradually, the daily rate can be increased to 120 grams.

The temper and socialization of American Pit Bull puppies

When breeding this breed, the puppy was instilled with a kind disposition to a person, hence the pit bull has a friendly and balanced character. The four-legged pet is endowed with intelligence in order to better sense danger and rush to protect the owner. On walks, it is recommended to pay more attention to the puppy, run, play, so that he is not distracted by other people’s pets and is not eager to get acquainted.

American Pit Bull puppies are ready to become loyal and devoted companions exclusively in the skillful hands of a stubborn and patient owner. Most breeders agree that the breed is obedient and trainable. It is important to know that when handling such a breed, you cannot keep the dog on a leash and develop aggression. Be persistent, getting the correct execution of simple but very important commands, without showing cruelty to your four-legged friend.

The specified breed is rare, choosing a four-legged friend, study the market. The buying decision is worth considering carefully. Be honest with yourself – will there be enough strength and energy, patience and experience for proper education.

The American Pit Bull puppies must be chosen, looking back at the parents – choose healthy and adequate dogs. Do not take your dog at the market, from unverified sellers. Choose a kennel where living conditions are created for dogs.

The owner should clearly understand why a dog of the specified breed is purchased. If you have a pet, rely on your intuition. The choice of a show dog seems difficult.

When buying an American Pit Bull puppy, even in an expensive specialized kennel, evaluate the physical condition of the puppy. It is easy to check by looking at the eyes for cleanliness, the coat for shine and the nose for moisture. Look at the dog’s behavior. Better to choose a playful, cheerful, non-aggressive puppy.

General description of the breed, character

Raising a pit bull puppy requires a lot of effort and training. The appearance says that a strong dog with developed muscles and a chest will grow up in the house. The mentioned breed is universal, to this day it has retained its hunting instinct (catches small animals), guarding functions.

Pitbull dog – watchdog, bodyguard, winner of the dog olympiads. In addition, a police officer. A harsh and rude-looking dog is affectionate with children.

Pitbull is a mixture of a bulldog and a terrier, the breed put strength and thirst for victory, speed and instant reaction into the animal. It is difficult to assume that at the beginning of the twentieth century, pit bulls were taken into large families with children because of their good disposition.

Today, a series of myths about the viciousness and aggressiveness of the four-legged breed has led to fear of animals, fear of keeping in families.