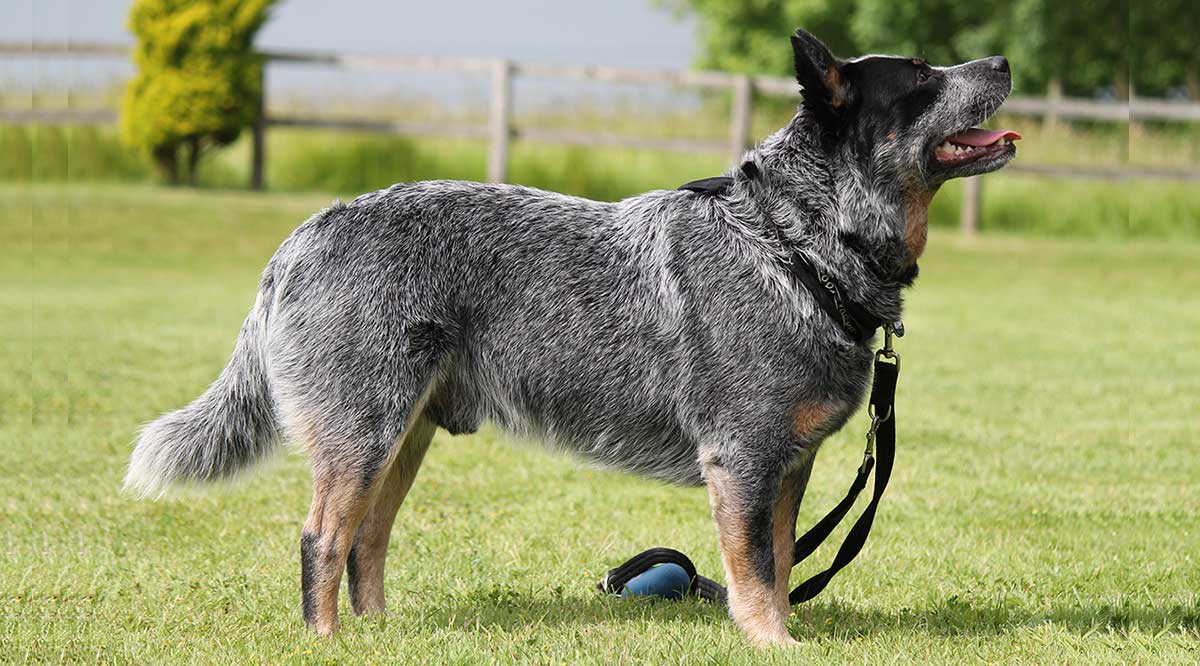 The Blue Heeler – Australian Cattle Dog, or simple the Cattle Dog. It also receives two different names depending on the type of fur it develops: “Red Heeler” or “Blue Heeler”. This dog has an incredible aptitude for training, breeding and physical exercise being an exceptional dog in the different canine sports.

A completely unique combination of the blood of domestic friends of man and wild dingo dogs, multiplied by an amazing speckled color – all this is an Australian shepherd dog or a blue healer.

His great physical needs, his mental stimulation and his education make him practically exclusive to people experienced in the possession of dogs.

In this ‘ Pets Feed ‘ breed file, we’ll tell you everything you need to know if you’re considering adopting a Blue Heeler Australian Cattle Dog to share all about its behavior, character, care or health issues. .

Characteristics of the Blue Heeler

The body of the australian cattle dog is strong, muscular and agile. It has great resistance and should not be rough or weak. It is slightly longer than it is tall and has a flat top (not tilted). The chest is deep and muscular. The head is robust but well proportioned to the rest of the body, and its characteristics reveal that this breed has goofy blood. The nose is black. The eyes are oval, medium and dark brown in color. They have a lively and intelligent look, which is suspect when strangers approach. The ears are medium, broad at the base, muscular, erect and somewhat pointed.

The tail is moderately low in insertion and almost reaches the hock. When the dog is at rest, the tail hangs with a slight curve. When the dog is in action, it lifts its tail, but not beyond the vertical.

The coat of the Blue Heeler dog is soft and of double thickness. The outer layer has very tight, hard, smooth and well-fitting hairs. The inner layer is short and dense. The coat may be blue (blue, mottled blue, dotted blue, which may have blue, black or beige marks) or mottled red (small red spots distributed throughout the body, including the inner layer, and which may have spots darker red on the head).

These dogs are characterized by being very loyal, energetic, tireless, courageous, tenacious and terribly intelligent. They are very attached to one person, which is why they are considered “master dogs”. They are excellent goalkeepers and can be very fierce when it comes to defending what is theirs. The temperament of the Blue Heeler dog is much better suited to the work of a dog than to any other activity.

The qualities of this dog did not go unnoticed by the large number of people who appreciated his company. His great physical and mental capacities are a real challenge for any experienced owner. As we mentioned earlier, the Australian Cattle Dog is not a dog for everyone. His agitation, his intelligence and his physical strength will need a proactive and energetic owner eager to stimulate his dog (in obedience and through games). They also need a lot of physical exercise and they are not good pets for sedentary families or for people inexperienced in handling dogs.

If we are considering having an Australian Cattle Dog, we must be sure that we can meet his physical needs, which may involve several daily walks, exercises, excursions, obedience and stimulation.

It is one of the breeds of dogs where the care of the hair is very simple. Brushing once a week is usually enough to keep this dog’s coat in good condition. And it is not necessary or good to bathe the dog very often, but you should only do it when it is really necessary. The minimum space between baths should be one month because otherwise we could remove its natural protective layer from the skin.

The Australian Cattle Dog needs a lot of exercise and a lot of attention. It must be remembered that they are not dogs to be left alone in the garden. They will feel comfortable in a rural environment where they can exercise in a large garden, especially if they have a pack companion with whom to run and enjoy the environment.

Living in an urban environment, the Australian cattle dog will need at least 3 daily walks where it can eliminate its stress and anxiety. He must also take advantage of at least 10 minutes in which he can run freely without a strap. For this, the most suitable thing will be to go to a park.

Canine sports can help channel the large amounts of energy from Australian cattle dogs. However, we can also exercise with our dog. A wonderful idea because it is a breed that hates loneliness and individualized life.

The Australian Cattle Dog is an extremely robust dog that can live in the air, which is why it is important to keep an eye on its weight. However, this dog must be fed a good quality and well balanced diet that is suitable for the different stages of his life to stay fit and healthy.

The mode and diet of the Australian Cattle Dog does not stand out from the accepted rules:

Newborn Australian Cattle puppies are fed with mother’s milk. The general diet is brought up from 2 months of age. Complementary feeding starts with cottage cheese protein and fermented dairy products. The next step is to introduce meat protein (in the form of minced meat) with vegetables. Puppies are transferred to the standard nutritional regimen at the age of six months.

It is also important that puppies are fed at least 3 to 4 times a day to start with, but you can start giving them the same amount of food twice a day when they are about 6 months old.

Healers are one of the healthiest dog breeds. They are completely undemanding to the conditions of detention, they perfectly tolerate absolutely any climate, they are not picky about food. In short, the efforts of Australian breeders, striving to breed the most unpretentious dog, have been crowned with absolute success.

However, sometimes even the Australian shepherd dog has hereditary diseases, such as congenital deafness, progressive blindness, as well as dysplasia of the joints and malocclusion (by the way, the latter refers to conformational defects rather than diseases).

Also, despite the good health of these dogs, one should not neglect the mandatory vaccination and treatment against endo- and ectoparasites.

The Australian Cattle Dog’s wild temper and activity do not interfere with training. The Australian healer’s desire to please the owner prevails over instincts. The pet will be happy to carry out commands in training courses. Self-organization of training should include loads of various types. Likes to do exercises where one has to think, very much likes praise. The dog will see in the owner a leader who must be obeyed and obeyed.

The instinct, passed on from descendants – shepherds, to bite on the legs, is brought to naught by pointing out to the puppy that this should not be done, but not by screaming and aggressive actions.

With proper organized training, the Australian Cattle Dog is unlikely to spoil the owner’s personal belongings. This is facilitated by the conversations and explanations of the owner, in which the healer sees an authority figure.

The Blue Heeler has a lively mind and is very trainable. And it should start from the very first day the puppy appears in the house. First, you need to establish yourself as a leader in your little pack, because the wild genes inherited from the dingo are very strong in healers.

Secondly, immediately teach the kid to respond to his name, show him the bedding and teach him the command “place”, as well as “no” or “don’t move” and “to me” – so you can control your four-legged friend. Gradually explain other commands to him, and do not be afraid to overdo it with their number, because you are dealing with a very smart and cooperative dog.

Mating must be taken very seriously in order to get healthy offspring:

Origin of the Blue Heeler

Unlike the Australian Shepherd, the Australian Cattle Dog is originally from Australia. European settlers who emigrated to Australia in the late 18th century and early 19th century needed cattle dogs capable of dealing with wild cattle in the harshest environmental conditions. Unfortunately for them, the dogs they brought were not able to withstand such hot weather and extreme working conditions.

So, in 1840, a man by the name of Hall decided to cross blue merle mountain collies with dingoes. The result was the forerunner of today’s Australian boyboy. The crosses included the Dalmatian, the Bull Terrier and the Australian Kelpie. In the end, a tireless, intelligent and courageous dog was obtained, capable of handling the toughest cattle in the most extreme conditions. The Blue Heeler dog is not the most popular dog today, but he has a lot of fans who share their life, canine sports and work with cattle with him. It is an incredible dog that is not suitable for all owners.