Australian Firefighters Pose With Animals For The 2023 Charity Calendar

Australian firefighters pose with animals for the 2023 charity calendar. Funds raised will go to various organisations. 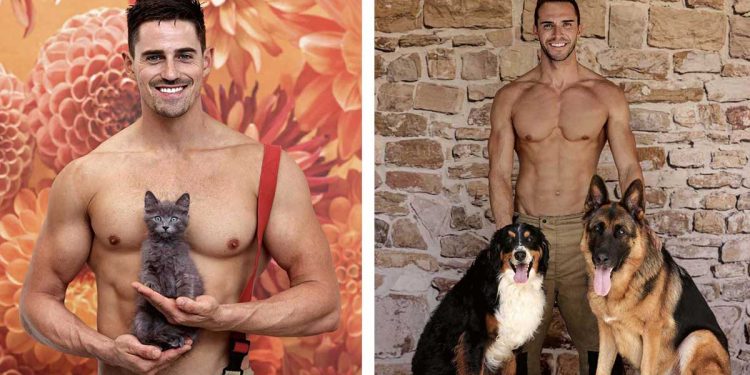 If you’re looking for a 2023 calendar to cheer you up each month, look no further than the Australian Firefighters Calendar. This annual publication is not only filled with some of the hottest firefighters in the country, but also benefits a great cause. Here’s everything you need to know about this year’s highly anticipated edition.

The Australian Firefighters Calendar was first published in 1993 and has since raised funds for various Australian charities. Firefighters from all over the country appear on the calendar posing in various settings, from the beach to the inland.

All the most popular editions are back, and new to celebrate the 30th anniversary is the new denim edition. Last year, they surprised us by making a summer calendar. This year the firefighters have decided to wear jeans and the images are incredible.

David Rogers, the Australian Firefighters Calendar Director, shared in a statement to Pet Notes all the details of this excellent work. Where he mentions the hard work behind to achieve this wonderful result.

As with every edition, the proceeds from the sale of the calendar are used to support various charities in the country and abroad, always concerned with the conservation of Australian wildlife.

The Byron Bay Wildlife Hospital is one such organization that is supported by the calendar as a reward for its excellent work. The hospital has stood out for its dedication and effort, they are responsible for providing all expert veterinary care free of charge, operating on the front line of wildlife protection and biodiversity conservation.

The calendar also continues to support the work of the Kids With Cancer Foundation. Since 1998, the work done by this foundation to support Australian families and hospitals is extraordinary.

Peter Bodman, director and founder of the Kids With Cancer Foundation, says:

“For 25 years, the Kids With Cancer Foundation has existed to help virtually every one of the nearly 800 children diagnosed with cancer each year in Australia and to make life easier for them and their families.”

As a thank you to the American public, American charities are also supported for the second consecutive year, such as Rescue Rebuild, a shelter renovation program of Greater Good Charities. The Rescue Rebuild team has completed 175 renovations that have helped over 3,200 people and over 720,000 pets.

“We are delighted to be the beneficiary of Australian Fire Calendar sales for two consecutive years, funds from the calendar will directly help support our Rescue Rebuild at Rhode Island Wildlife Clinic to enable the clinic to accept more animals each year and help reduce stress for wildlife and staff.”

This year’s edition will surely be as popular as the previous ones. So, if you’re looking to keep your 2023 calendar up to date, there’s nothing better than grabbing a copy of the Australian Firefighters Calendar.

This year, without fail, twelve beautiful firefighters from across Australia appear, and we think it’s also important to meet some of the real-life heroes who are part of this great work.

For example, firefighter Ben Wallace, before joining Fire Rescue Victoria, had a distinguished career in the Australian Army. Deployed for 3 active tours in Iraq and 1 tour in Afghanistan, Ben’s work in these war-torn countries has changed the lives of countless families desperate for peace and security.

“In Afghanistan, I was deployed with the Australian Army Reconstruction Task Force. Our job was to build schools for young Afghan girls, my role was to protect our task force members and Afghan girls from the Taliban. The schools we provided enabled these young women to be educated, which provided better opportunities for them and their families.”

Australia’s finest men have put out more than fires. A hero of a different kind is Ricky Smith, who served his community as a surf lifeguard for 23 years before joining the Queensland Fire and Emergency Service (QFES). Joining his first surf club at the age of 8, Ricky ended his surf lifesaving career as a professional, rescuing swimmers from unpredictable oceans.

“The most rewarding part of being a surf lifeguard was saving people from a life-threatening event and that’s why I wanted to continue serving the community by joining the fire department. Over the past 6 years I have been able to continue to help people when they are most vulnerable.”

And as part of the calendar’s 30th anniversary celebration, 6 firefighters were invited to Los Angeles to appear on the Kelly Clarkson Show. The firefighters also appeared in a series of segments on NBC’s popular ACCESS Hollywood, CBS’ Entertainment Tonight and FOX’s Good Morning LA.

“After 3 years without being able to travel, it was fantastic to be back on a live US TV show. The last time we visited the US we appeared on the Steve Harvey Show, the Doctors and the TODAY show with Kathie Lee and Hoda. We really wanted to reconnect with our American fans.”

If you’re looking for something to decorate your wall with this year, look no further than the Australian Firefighters Calendar. Don’t forget that the money collected is donated to various charities.