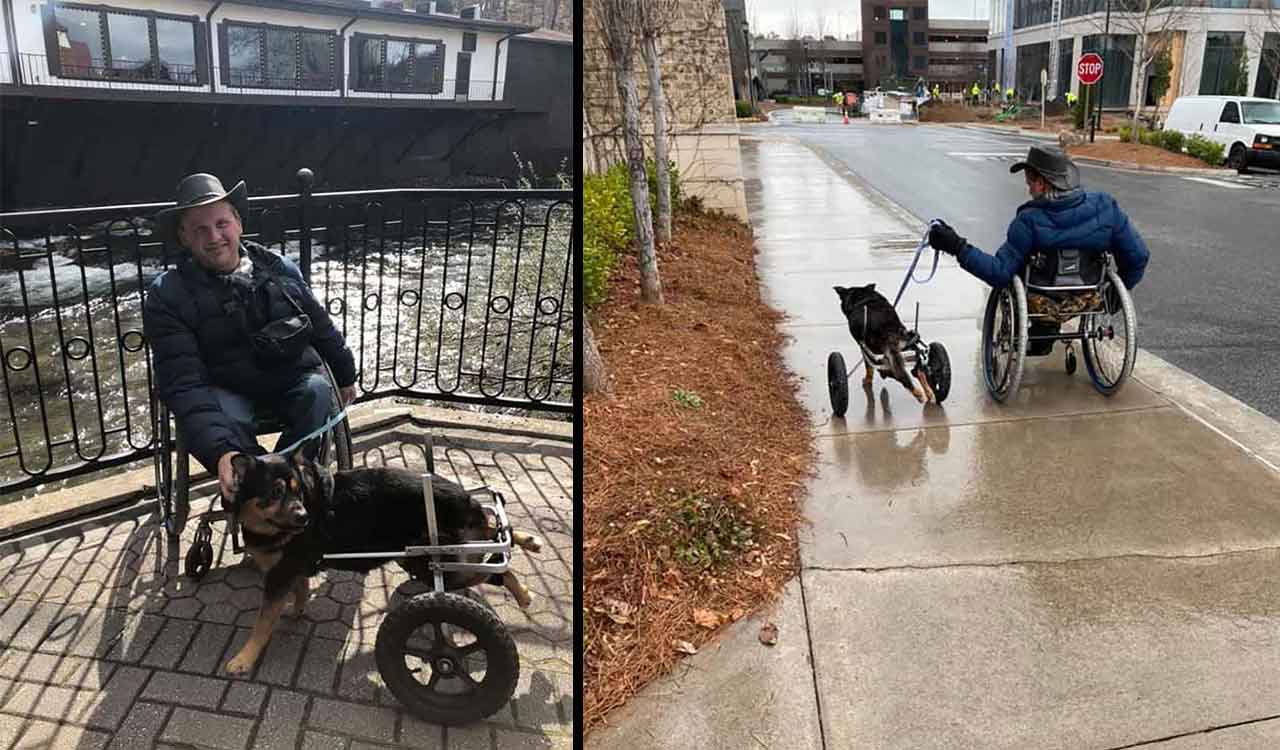 This special-needs dog has been returned 4 times by different families, is finally adopted by someone who understands him.

Bandit is a special needs dog who was adopted and returned 4 times by different families. It seemed like he would never have a forever home, but one day his life changed.

The dog was found on the streets of Georgia and taken to Gwinnett Animal Shelter, then transferred to the Gwinnett Jail Dogs program. This program prevents dogs from being euthanized, has inmates take care of the dogs and train them in a home.

Everything seemed fine for Bandit, but health issues have left him with paralysis in his back, so he has to get around in a wheelchair.

Bandit’s special needs require a great deal of care, which may be why his adopters repeatedly returned him to the program.

Although the program volunteers love the dog, they wanted him to have a forever family and home.

After so many disappointments, it seemed like the right family would never come, until a couple saw the Facebook post and knew they could give it the attention it needed.

The couple, consisting of Darrell and Sue Rider, were moved by Bandit’s story, they weren’t bothered by their special need, since Darrell has the same disability.

The most intriguing part of Bandit is that he and I share the same type of paralysis and use a wheelchair to get around. Because Sue and I know what it’s like to live in a wheelchair, we knew what Bandit needed. We also feel a much deeper connection.

After deciding to adopt Bandit, the couple reached out to the show to discuss everything they needed to know about caring for the dog. This process took a month, but in the end everyone agreed that Bandit was a perfect fit for his new family.

Darrell said Bandit was “just like him” and they wanted to give him a life where he was understood and cared for.

After walking through the steps and meeting Bandit, there was no doubt that they were destined to be his parents.

Everyone was ready for the dog to be taken to his new home, even though the sight tasted bittersweet of him leaving, he was going to be missed by everyone.

He had been on the show for so long that it felt like home already, everyone loved him, but in the end, they’re happy he found a family.

He meant so much to all of us in the detention center that it is now very strange to walk into the unit he was in and not see him running to you for a present.

Now Bandit is in his new home, and he has adapted perfectly, as if he had been there for many years. The dog’s relationship with his new family is perfect, they have already had so many adventures and they love each other as if they have known each other forever.

Bandit is doing very well and has adapted better than we could have imagined with his new family and surroundings. We, as his family, couldn’t be happier to have Bandit in our lives.