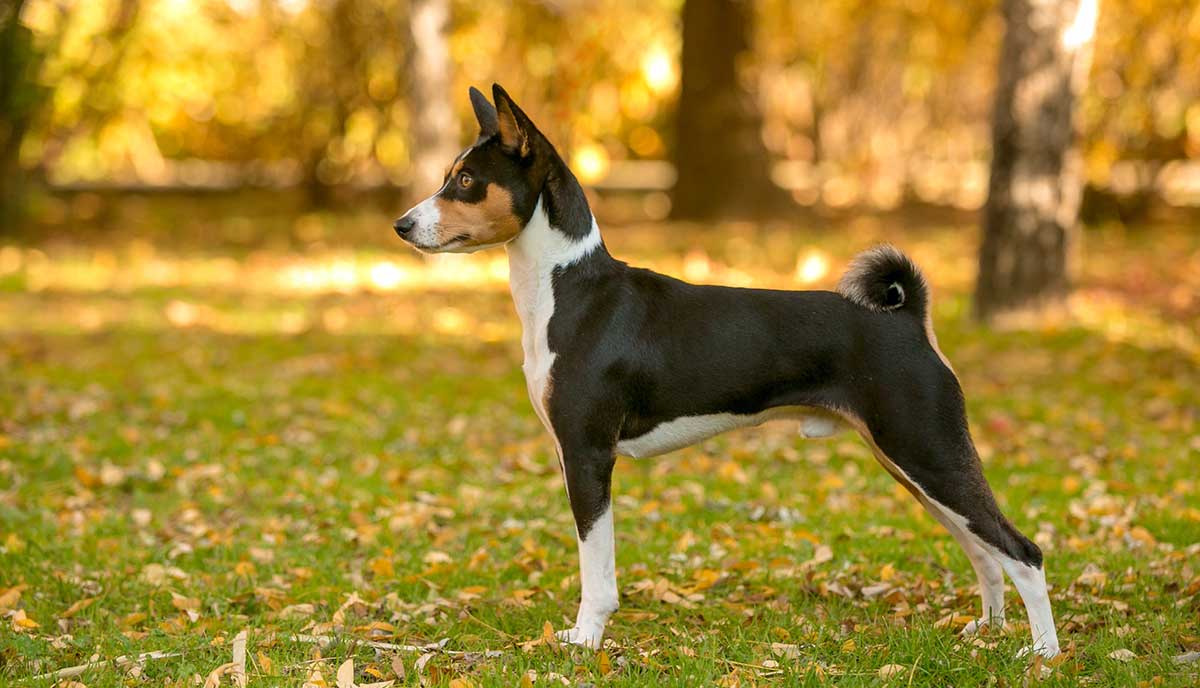 Originally from Central Africa, the basenji is one of the oldest dogs that exists today. This intelligent and balanced dog has two particular characteristics: it never barks and the females heat only once a year. The absence of barking does not mean that the basenji is a dumb dog; It makes sounds that could be defined as a mixture of Tyrolean song and muffled laughter. However, it is a generally calm dog.

The presence of annual zeal, instead of biennial as in other breeds of dogs, denotes the phylogenetic antiquity of the basenji, since this characteristic is shared with wolves and with New Guinea song dogs (dogs that do not bark not).

Such a pet is ideal for apartment living, because in addition to being quiet, the basenji does not have a specific smell, does not take up much space and has a tender character. The main thing is to provide this overly energetic doggie with the opportunity to walk a lot and spend time actively.

Whether you are considering adopting a basenji or already have a partner of this breed, in this ‘ Pets Feed ‘ breed sheet you will find out everything you need to know about him, the physical characteristics of the basenji, the character, the care and the health.

The history of basenji began more than 5,000 years ago. The birthplace of this unique dog is central Africa. In ancient times, African barking dogs were very popular and held in high esteem. Even the great Egyptian pharaohs were pleased with the gift in the form of a basenji. The fact is that these animals were considered living amulets, according to legend, they protected their masters from evil spirits and attracted the favor of light forces.

The popularity of basenji in ancient times is evidenced by many finds of archaeologists. For example, in the tombs of the pharaohs, many wall paintings with images of African dogs were found. But the drawings weren’t limited to drawings; basenji mummies were found next to the mummies of great rulers.

Representatives of the breed were valued not only for the magical abilities assigned to them. African dogs were indispensable helpers during the hunt. Speed, sharp scent, innate desire for prey allowed the basenji to easily detect game and overtake it. To date, in Africa (Congo), aborigines still hunt along with these dogs, using their innate hunting instinct.

For a long time, African barking dogs were found exclusively in the territory of their homeland. But the time has come, and amazing animals left their native continent, setting off to gain popularity around the world:

1895 – English travelers brought several dogs from the African continent to England. The fate of the animals was sad, they could not survive in a new place and died. But their unusual appearance, habits and strange sounds instead of the usual bark interested dog lovers.

1905 – Basenji settled in the zoo of Berlin as exotic African animals. The fact that they can be kept in homes as pets has not yet been discussed.

The thirties of the twentieth century – Basenji take root in England, at the same time, the British determined and approved the standard of this breed.

1937 – in America, African dogs took part in the dog show for the first time, only then they were given the name not “Basenji”, but “Congo Terrier”. The newly-minted exhibitors liked the Americans very much, it was considered prestigious to have a barking dog brought from Congo in the house.

Soon the spread of the African breed began around the world. The popularity of dogs has been steadily growing. Cynologists’ interest in these dogs increased even more when geneticists in 2011 managed to prove that modern Basenji has an admixture of North African and Middle Eastern wolves.

Physical characteristics of the Basenji

The basenji is an elegant, athletic, small and unusual dog. His head gives it an aristocratic appearance, and the forehead has fine and well-marked wrinkles when the dog lifts its ears. The skull, of moderate width, narrows gradually towards the nose, the cranial vault is flat and the abutment, although existing, is not very marked.

The basenji’s eyes are dark and almond shaped, they are arranged obliquely in the skull and his gaze is penetrating. The small ears end in a point and the dog is erect and slightly tilted forward. The basenji dog carries the tail, which has a high insertion, tightly curled on the back.

This characteristic tail of the breed can form one or two curls next to the thigh. The back is short and flat, and the chest is deep. The upper line rises to form a clearly defined size. Basenji’s fur is short and very dense, fine and shiny.

The colors accepted for this breed are:

Basenji in appearance is divided into two types:

The basenji is an alert, independent, curious and affectionate dog. It can be reserved for strangers and can respond aggressively to provocations, so it is not the best option for families with young children. Due to its predisposition to hunting, this dog is generally not recommended to live with animals of other species.

However, he generally get along with other dogs. Of course, socializing a puppy is a necessity for both this breed and any other breed of dog. This canine breed is very active and can be destructive if it is not given the necessary exercise. His hunting impulses make the Basenji an independent dog, but that’s why you shouldn’t leave him alone for long.

In fact, the basenji, like all many other breeds of dogs, also needs his human companions to take care of him, play with him and offer him affection. While he doesn’t like being overwhelmed with effusive hugs, he also doesn’t tolerate indifference.

On the other hand, the basenji is a very small dog that is extremely clean. In addition, his character also highlights his playful, playful and very stubborn personality. This breed of dog needs a patient and constant companion in its education.

Basenji dogs have the particularity of not barking, but they emit howls similar to those of the Tyrolean song when they are excited. This breed of dog, awake, independent, autonomous and practically odorless, looks very much like a cat.

We even know that they climb trees and fences like felines. They are affectionate with loved ones, but they tend to be distant with strangers. The Basenji often faces other dogs, so early socialization is essential.

On average, representatives of the Basenji breed live for 14-16 years. Nature rewarded them with good health, but there is a predisposition to certain diseases:

The dog must be vaccinated on time. It is also recommended to visit a veterinary clinic with a pet once a year for preventive examinations.

Created for hunting on large grounds, the Basenji requires at least an hour of exercise a day and has more stamina if you can give it. Although it is not easy to train, it is advisable to involve the Basenji in some kind of canine sport to keep your body and mind healthy.

They have absolutely no idea what a route is, so care should be taken when exercising.

The owner must provide his energetic pet daily long walks, accompanied by active games and activities. If the African dog gets bored, then he will begin to spoil the property, will become irritable and even aggressive not only to strangers, but also to domestic ones.

Having African roots, the Basenji does not tolerate cold at all, this is another reason to keep a dog in a residential, heated room. Representatives of the breed do not have a specific unpleasant odor, fade weakly and do not create noise. So, the pet will not create special problems in the house. It is only necessary to take into account that the Basenji love height, they always try to climb some kind of elevation in order to take a nap or take up a post of observation of others. Therefore, the dog can choose a master bed for sleeping. Such liberties must be stopped from the first day, the puppy must know its place, which the owner will determine for him.

Among all types of dogs, the Basenji is considered to be the cleanest. It is compared to a cat, as it tidies itself up with a paw. The cleanliness of the pet does not exempt its owner from certain procedures that we must carry out:

Particular attention must be paid to the basenji diet. African dogs have their own requirements. The main component of nutrition is raw meat of low-fat varieties (chicken, beef, rabbit). If you want to feed the dog with ready-made feeds, buy only professional, premium class from well-known, established brands on the market. It should also be borne in mind that basenji dogs are prone to overeating and obesity, so you must strictly observe the number of servings and not exceed the number of calories.

A keen mind, quick wit makes Basenji smart students. If you find an approach to such a dog, it will quickly master all the rules of behavior on the street and indoors, and it will also easily pass all the necessary training courses. But if the owner shows the pet his weakness, impatience or rudeness, training will come to a standstill.

Early socialization is important for the Basenji dog. From almost the first month of life, this dog needs to be introduced to all members of the family, pets, as well as to teach strangers to society. Adult basenji is extremely difficult to educate and train.

Experienced dog handlers recommend during training to select exercises related to the pursuit, the pursuit of different goals. It is also recommended to conduct as many activities as possible in the field, where the dog will be able to run freely.

Basenji is an active, nimble and mischievous dog whose wild temperament is not suitable for everyone. Before buying a puppy of this breed, you should familiarize yourself with its advantages and disadvantages.