Bazooka, The Obese Cat Whose Life Changed When He Met The Right Person 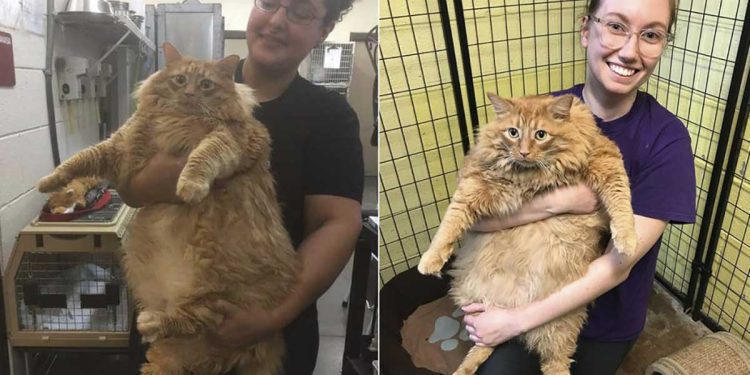 Bazooka, the obese cat whose life changed when he met a marathon runner, weighs nearly 36 pounds and has a lovable personality.

An adorable 5-year-old obese tabby cat named “Bazooka” is causing a stir at an animal shelter because of his large size. The feline weighs around 36 pounds and came to the shelter after its former owner died of old age.

The man suffered from dementia and is believed to have forgotten when he fed the cat and therefore kept his bowl full of food, which may have been the reason the cat became obese.

When he arrived at the Wake County SPCA shelter, the employees were surprised at his size, he even had to be carried by 2 officials due to his weight.

It’s amazing how big and how old he is. He’s 34 inches long, so he’s a very square cat.

By the time he got to the shelter, he was dirty and spiky, because due to his large size, Bazooka can’t be properly cleaned, it’s too much fur to deal with.

Despite his obese state, he remains an agile cat, able to jump on the bed and even climb the stairs slowly but surely.

Without a doubt, it is necessary for Bazooka to begin adequate treatment to lose weight and be able to carry out the activities of a normal cat, since he is very young and has a long life ahead of him.

Although she looks imposing for her size, her personality is absolutely sweet, relaxed, and happy.

This cat is the coolest cat ever. It’s so calm and relaxed. He’s happy all the time.

The shelter posted photos of the feline on its Facebook page and shared them with rescue groups in an effort to find a suitable home to help it stay healthy and lose weight.

That’s when Robin Anderson came across the giant image of Bazzoka while searching various rescue groups for a possible pet to adopt.

Robin immediately fell in love with the feline and knew he was the one to fill the hole in her heart left by the death of her former cat.

Without thinking Robin called the shelter hoping that Bazooka had not been adopted, when the staff heard his personal story they knew it was the right home.

She herself had lost over 120 pounds and now runs marathons. So I was very excited to step in and help her document her weight loss journey. He even wants to take advantage of his training to do some cardio.

Bazooka was brought to his new home after spending about a week at the shelter. He is now known by his new name “King Augustus”.

He’s still getting used to his new surroundings, but it won’t take long for him to gain confidence and reunite with his new brother, a 10-pound dog named Rufus.

Robin will do everything in his power to bring the cat back to health and weight and give her all the love she needs.

With a new name and a new family, Rey Augusto will enjoy many happy and healthy years.