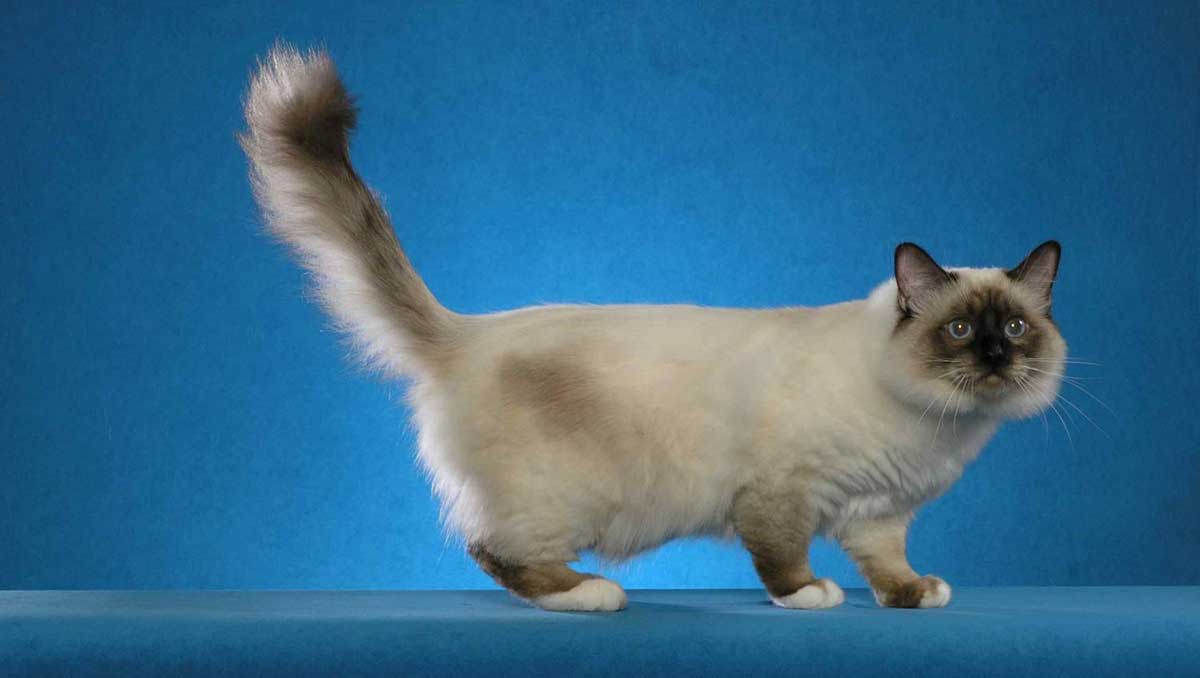 The Birman, or the “Sacred Cat of Burma”, is a cat with darker, medium-length hairs on the distal marks, face, paws, ears and tail, and lighter on the rest of the body.

It is a large cat, with a fleshy body and short legs. The Birman cat has blue eyes and four pure white claws. The “socks” before only cover the knuckles but the backs are longer.

The head is broad and rounded, with medium ears. The Birman can have many different colors.

The Birman cat should not be confused with the Burmese cat.

Characteristics of the Birman cat

This cat can weigh between 3 and 8 kilograms, which is another indication that it is a medium-sized cat. Its head is rounded and large, almond-shaped eyes draw attention to it, which always maintain a very intense and deep blue color.

Birman cat’s coat is rather long, although it does not reach the length of other breeds. It is dense and silky to the touch, and has an inner and an outer layer. The shades of this cat are very special and unique among all breeds, and that is perhaps the highlight of the breed.

On the back, the color is golden, and on the legs, tail, ears and face, the hue is chocolate. However, the end of the paws remains in a pure white color that takes the shape of a glove and that stands out in the rest of the body. A characteristic that is repeated in all copies of this breed.

The Birman cats are calm and balanced cats, which will also be perfect playmates of both the family and other animals, since it is an extremely sociable and affectionate breed, which will always be looking for our love and attention. This is why these are cats that despite enjoying peace and tranquility, do not tolerate solitude well, something to consider if we spend a lot of time away from home and there are no other pets that provide company during those periods.

Balance is the key to define the Birman specimens, since despite being playful they are not destructive or restless, despite being very loving they are not demanding or heavy, which makes them perfect cats for families, as they will love to spend hours playing with children at home and enjoying their company.

The Birman cat’s temperament is docile. Likewise, he is usually curious and attentive to his owners, in addition to being remarkably intelligent. For all this, it is easy to teach him tricks and stunts, which he will enjoy and of course we can also delight ourselves with his fun tricks and skills.

Some young Birman cats have symptoms of kidney failure in blood tests, and although not certain, this can sometimes lead to kidney failure.

The Birman, like every cat, is unique and has its own food needs.
However, cats are carnivores and each cat must get 41 different specific nutrients in their food. The proportion of these nutrients will vary according to age, lifestyle and overall health.

It is therefore expected that a growing energetic kitten will need a different nutrient balance than a less active older cat.

It is necessary to pay attention to the amount of food necessary to maintain an ideal physical condition according to the guidelines for food and individual preferences with regard to the type of food (wet or dry).

Basic care of the Birman cat

As for the care of the Birman cat, as we have already seen, they are really simple. It does not require a maximum effort to have a good education and a good character, although it is important to pay the necessary attention. Like trying to socialize it correctly as a kitten.

Regarding its hygiene and feeding, the most important thing is to brush the cat frequently to avoid leaving a lot of dead hair on the animal’s body. That dead hair can end up in the cat’s digestive system as part of its own grooming, which is very dangerous because of the formation of fur balls.

Apart from that, a bath every two months will be more than enough to keep your coat and health in perfect condition. And of course, never forget to offer you a quality diet, both dry and wet, so that you receive all the energy and vitality you need.

There is a legend about the origin of the physical characteristics of Birman cats. A legend that begins in Khmer, where the Lao Tsun temple was raised to worship the goddess Tsun-Kyan-Kse, who was said to have sapphire eyes. In the temple the priest Mun-Ha resided with his cat Sinh, and together they worshiped the goddess and spent long moments lying in front of it. Until cruel fate wanted thieves to storm the temple and murder Mun-Ha. Then Sinh settled on the body of the priest and looked at the goddess, turning the hair on her body a golden color, except for some details that took on the brown color of the earth. In that process of change, her eyes turned sapphire blue, but the legs were immaculate, drawn in pure white that symbolized the purity of her master. These characteristics were extended to the rest of the cats in the temple the following day. And Sinh died a few days later to take Mun-Ha’s soul to Paradise.

If you want to share your life with a specimen of this breed, it is time for you to start looking for specialized and professional breed hatcheries in Birman cats. Keep in mind that many cats that are sold in stores or between individuals come from indiscriminate breeding, which implies an animal without guarantees of breed or health, and terrible treatment for their parents. However, there are more and more responsible breeders who can offer you all the guarantees you need, so you only have to find the one closest to you.

Although there is no clear trace of the origin of the Birman cat, a legend says that this breed comes from Burma, where this breed was taken care of by the monks of the temples. A couple was brought to France around 1919, from which the breed was established in the western world.

However, the Birman was about to disappear as a cat breed during the Second World War and was crossed mostly with long-haired breeds (including the Persians) and also with some Siamese lineages to rebuild the breed.

In the early 1950s, litters of pure Birman cats began to increase. The recovered breed was recognized in the United Kingdom in 1965.

Cat Who Was Misunderstood Because Of Her Grumpy Face, Finds The Family Of Her Dreams

Stray Cat Decided She Wanted To Live With The Humans, They Invited Her Over And Never Left