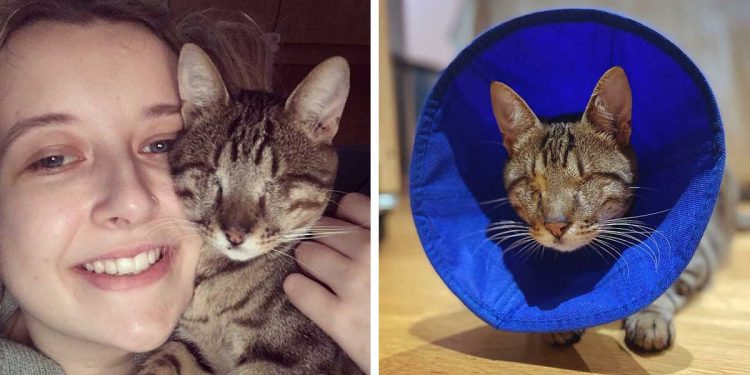 An adorable blind cat from Greece who was rescued from the streets has found a second chance with a loving family.

Many times, the popular expression “love is blind” is often heard, and Dmitri, a blind cat from Greece, is living proof that the expression is completely true, since, despite his problems, he was able to find a family that has completely fallen in love with him.

In the past, Dmitri was just a homeless cat roaming the streets of Greece, looking for shelter or food to survive. Apparently, something serious happened to his eyes, as the first one got infected, then the other, leaving him blind.

Dmitri was taken to a veterinary clinic, but there the doctors had no choice but to surgically remove both of his eyes.

A blind cat from Greece is adopted

The kitten was taken in by a charity in London, England, where he received all the attention and care he needed due to his condition.

While at the charity, Emma introduced herself, a woman who was looking for a rescued street cat to adopt.

The woman contacted the organization and local workers offered to adopt a blind cat. In general, these types of cats are abandoned more often and it is much more difficult to find them a permanent home.

Exactly, that was what Emma wanted, to help an animal that really needed it, so it was the best option.

The shelter told Emma they had a blind kitten available, which they rescued from the streets and brought back from Greece. Also, they told him that when they found him, he had a very serious eye infection, so they had to remove both of his eyes.

Finally, the woman met Dmitry and was captivated by his lovely presence and attitude, since then life has changed for them.

I fell in love with him as soon as I met him. He was so kind and caring from the start, and I thought he was really handsome. As soon as I walked into the room, he gave me a hug. foot and I knew he wanted to adopt him.

Now Dmitri lives in Emma’s house with his family and, although he can’t see, he has a life like any other cat. Dmitri has learned to use his other senses to get his bearings, with the only difference being that he can’t go out on his own, even if they let him explore the walled gardens.

It’s almost no different caring for a sighted cat. He’s able to orient himself with his other senses, and I don’t have to make any adjustments to account for his blindness.

Its excellent sense of smell and hearing allow it to move around the various places it visits, although it also uses its legs to know where it is.

Although Dmitri cannot see, he trusts humans a lot and lets them guide him wherever they go.

Dmitri is not only popular and loved by his family, but he has also become a star on TikTok and other social networks. His gentle demeanor and his willpower to live a normal life have made people very interested in his life.

Adopting Dmitri is the best decision I have ever made. He’s such an affectionate cat and I think it’s wonderful that he’s become so popular.

In addition, Dmitri’s popularity serves to make other cats with disabilities seen differently and can be adopted more easily.