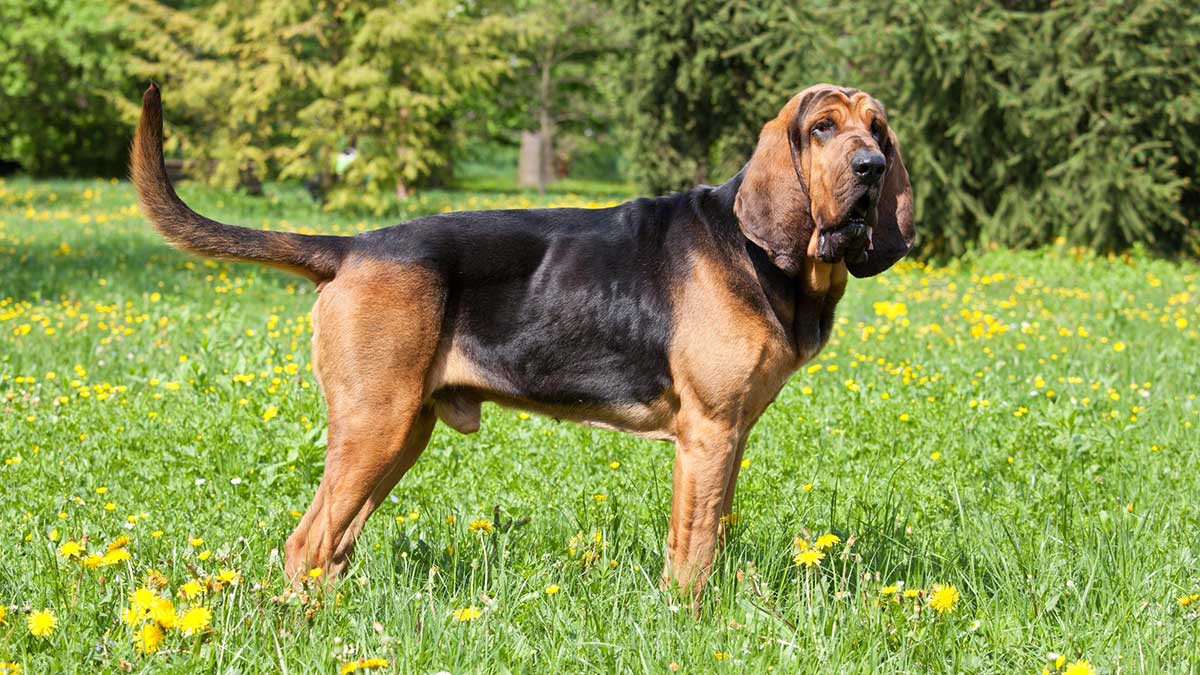 The bloodhound also known as Saint-Hubert dog, is easily recognizable by its noble and wrinkled head, its drooping eyelids and its long ears hanging like pendulums. It also has a strong body and legs and is a very big dog.

This dog is native to Belgium. We are talking about one of the oldest dog breeds in the world, which also has impressive physical characteristics, thanks to its size and appearance. However, the character of the bloodhound surprises everyone who knows it, as it is also a very balanced breed of dog that creates strong ties with its guardians, whom it follows and protects.

This dog has an innate and unparalleled ability to locate, so he is the only dog ​​whose tracking evidence is allowed by the court in some countries.The bloodhound dogs are known for their excellent tracking ability, which no other dog can equal.

The Bloodhound is a dog that is ready to help people from birth. In the genes of the representatives of the Belgian breed, there is a desire to serve the owner. These dogs almost never show aggression. They cannot be taught to attack a person.

If you are considering the option of adopting a bloodhound or, simply, you want to know more about this dog breed, keep reading, in this ‘ Pets Feed ‘ breed sheet, we will show you everything you need to know about the bloodhound, probably the dog with the best sense of smell in the world. Keep reading!

The birthplace of Bloodhound is Belgium. The name of the breed sounds somewhat ominous – “blood dog”. In fact, Saint-Hubert dogs do not possess any bloodlust, their severity is at the level of hunting dogs.

Regarding the origin of the name, there are 2 versions:

Bloodhound is the oldest species of hounds. The distant ancestors of modern Bloodhounds lived in monasteries. The monks were engaged in breeding these dogs and monitored purebred. In the Middle Ages, the hunting abilities of bloodhounds were appreciated by royalty. Representatives of the breed were kept in packs at the royal kennels, participating with their high-ranking owners in the hunt.

Bloodhounds were introduced to England in the tenth century. It was here that the development of the breed continued. Representatives of high English society appreciated the Belgian hounds.

The popularity of the breed grew. An exceptional sense of smell made a Bloodhound not only a hunter. In America, these dogs began to be used as bloodhounds. They participated in search operations, and could easily find a person in any locality. Even if the search lasted 24 hours, the dog followed the trail without rest.

Also, bloodhounds are used in the police service, at customs. They help to investigate crime scenes. By smell, they often manage to detect the culprit.

European breeders have made more than one attempt to develop aggression in the Saint Hubert dog. The effort was in vain. These powerful, brave dogs do not attack humans. Aggression is not peculiar to them.

Bloodhound is a powerful dog with a specific, colorful appearance. A characteristic feature of the breed is a large head with numerous drooping folds. In males, this feature is more pronounced.

The ears are drooping, thin, resembling velvet when touched. The neck of the Bloodhound is long, so that the hunting dog can sniff the ground without difficulty during movement. A large square-shaped head rests on it. Despite its large size, it looks beautiful.

There are skin folds on the forehead and cheeks. When the dog tilts its head, the folds hang down noticeably.

The eyes are medium in size. The color depends on the color, it can be amber, hazel or dark brown. Despite the fact that the lower eyelids droop, bloodhounds do not suffer from tearfulness. Only redness can be observed in the corners of the eyes. The look seems bored, in fact, the representatives of the breed are very active and cheerful.

The nose is large, the nostrils are wide. The lips are long, there are voluminous flews in the corners. The jaws are powerful with large teeth. A scissor bite, but a straight bite is also not considered a fault.

The back is straight with a strong loin. The chest is powerful and wide. Legs are straight, muscular. By the limbs, you can judge the endurance of the dog. The tail is saber-shaped, rather thick.

The skin is elastic and soft. Skin folds are formed only on the face, on the neck, in the chest area. On the body are not desirable.

Bloodhound’s coat is coarse, close-fitting, short. Such a coat reliably protects the dog from cold and natural precipitation. The following colors are allowed:

Bloodhound breed, despite its menacing appearance and size, loves people very much. And even taking into account the fact that with the help of these dogs they still catch runaway criminals and track down illegal border violators, love for people remains an important character trait of these animals.

Another thing is that in the past they were used by slave owners and specifically hated and bloodthirsty in dogs. By the way, precisely because of their attitude to people, now these dogs are practically not used as guard dogs and for protection, although if the offender tries to attack you, your pet will certainly stand up for protection. These are very smart and devoted animals that don’t mind in their family and master, they love close contact, interaction, participation in family life, affection and tenderness.

However, despite devotion and love, the Bloodhound can be quite willful and sometimes act in its own way. With strangers, if this is a friend of the family, the dog will most likely behave shyly at the first contact, but this happens when he gets to know the person more closely. Children are perceived well, kindly, cases when these animals were aggressive with the child can be counted on the fingers – this is a huge rarity.

Bloodhound has a fairly high level of energy, although it is not a fidget, and therefore needs exercise and daily walks. By the way, the instinct of the pursuer and the hunter becomes apparent on the street – the dog seeks out interesting smells and constantly tries to follow them, so the owner must be vigilant. In addition, it is necessary to maintain muscle tone.

Bloodhound dog is perfect for keeping in a private house with its own yard, but it may well get on in the apartment. These animals are quite strongly attached to their family, and therefore leaving them for a long time with friends is not a good idea. If you travel a lot, and it is not possible to do this together with your four-legged friend, it is better to choose a different breed of dog.

Some bloodhounds can bark loudly and a lot in an excited state, while others, on the contrary, are not inclined to give a voice, you can’t guess here. In general, the breed is distinguished by obedience, although you need to get used to their independent nature. Most importantly, do not try to take a dominant position solely from a position of strength – this will not only negatively affect the character of the pet, but, in principle, will build relationships with the animal not as a friend, but as a subordinate.

They are docile and affectionate dogs that generally get along well with children and can live in harmony with other dogs and pets. These are warm dogs that will welcome the desired and unwanted visitors.

Although they remain silent at home, they can be very communicative abroad. They are family dogs and do not like to be left alone.

The average life span of the Bloodhound is 10-12 years. To maintain his body in a healthy state, preventive examinations with X-rays and tests should be carried out annually in a veterinary clinic. This will help to detect the disease in time and get rid of the problem at the initial stage.

Bloodhound dogs are predisposed to the following diseases:

It is important to carry out routine vaccination on time to avoid infectious diseases. The first vaccination is given to the puppy at the age of 8-9 weeks, the second vaccination is carried out in a month. Be sure to deworm a dog of any age 10 days before vaccination.

It is also important to treat animals from skin parasites, especially in the spring-summer period, when it is time for ticks.

Apartment keeping is not recommended for the Bloodhound dog. He needs space, freedom of movement, fresh air. That is why the ideal option for representatives of the breed is a private fenced yard with an aviary and a warm booth.

The Bloodhound loves walking. He loves to run, play a hunter, sniffing out smells on the way. If this dog gets too carried away by some smell, it can, leaving the owner behind, go on an independent journey. Therefore, it is important to always keep your pet on a leash, at least when walking in public places in an open area.

This dog needs a lot of physical activity. Take daily walks with her in any weather, two walks a day are recommended, each of them should last at least 45-60 minutes. This mode is recommended for adults, mature animals, since the puppies should not be overworked.

Such an active dog should have toys, long-playing bones. Also, be sure to buy containers for water and food, keep them clean. In addition, you will need bloodhound care products (brushes, washing, nail clippers …), which you will use during the procedures below:

It is important to provide the Bloodhound with a balanced diet. The fact is that these dogs are prone to problems with the musculoskeletal system. In many cases, such diseases occur due to improper diet. Particular attention should be paid to this feature during the growth and development of the pet.

Because of their size and rate of growth, it is best not to exercise excessively when they are still puppies. During the first year, care must be taken to ensure that bones and joints have the opportunity to develop properly.

The adult Bloodhound dog loves endurance and needs at least two hours of physical exercise a day. They are mainly stalk dogs looking for smells and looking for origin. There are courses and tests, and your participation in these courses is recommended.

To raise a well-mannered, obedient Bloodhound, you need to start educational work as early as possible. It is important to find an approach to the pet and persist in training.

Rudeness, physical punishment will not help in working with a hound. It takes patience, calmness, consistency and encouragement.

It is not recommended to teach the Bloodhound on your own at home. The ideal option is a special playground and training courses under the guidance of an experienced dog handler.

The Bloodhound – St. Hubert dog is completely unsuitable for inexperienced people. The owner of such a dog must be strong-willed, with a strong character, active. Before buying a puppy, check out the main pros and cons of the Saint Hubert dog.

If you think that this breed of dog is the most suitable for you, you should go to a breeder specialized in it and professional, with previous references to have all the necessary guarantees on the health of the puppy of bloodhound – St. Hubert dog. In addition, going to a reputable breeder you will have all the information you need about the breed first hand, which will greatly facilitate the task of educating and raising it properly.