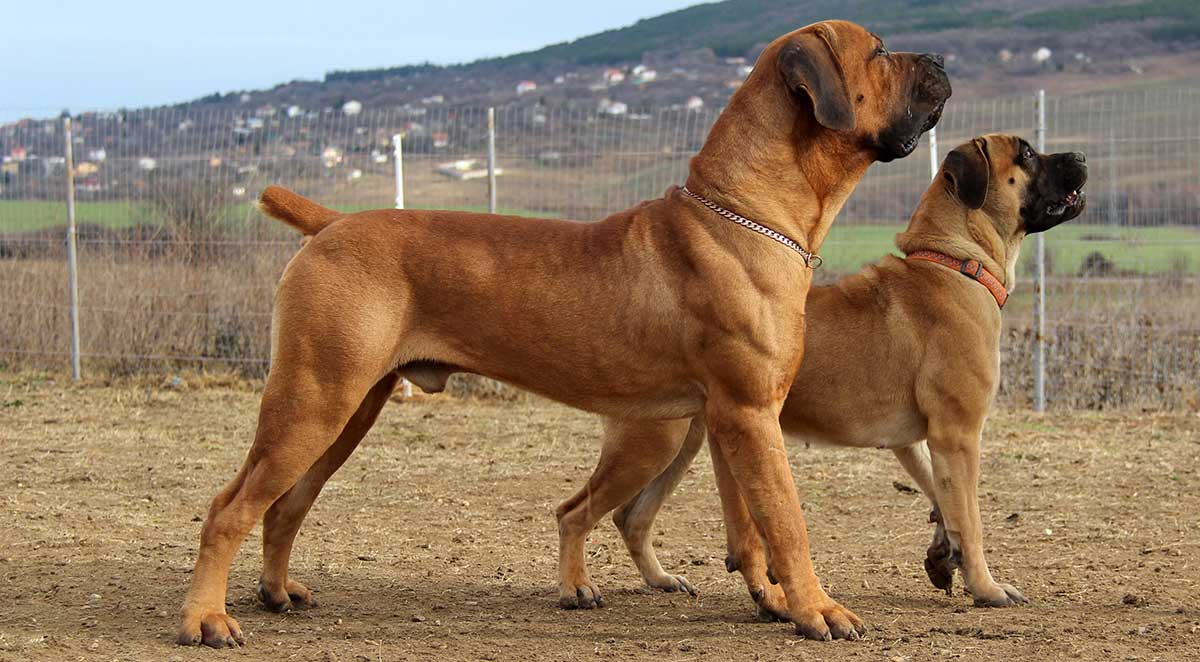 South African Boerboel – a dog with great physical abilities. In the past, such a dog was an invincible fighter participating in battles with dogs and predators. Now he can become a faithful companion, guard and protector of his master.

Its ancestors are the bullmastiff, the Great Dane and the bullensbeisser, the latter an already extinct dog.

Physical characteristics of the Boerboel

Boerboel is a textured, well-inflated “athlete” with a surprisingly calm and intelligent look. It is a heavyweight and far reaching that gives the impression of an extremely fearsome creature. Despite its large size and heaviness, this dog is maneuverable and fast.

Character and temperament of the Boerboel

Despite the power of its jaws, its fearless character and its ability to attack large predators, which have been developed and used throughout the centuries of the breed’s existence, the Boerboel can be a very affectionate and obedient dog with its family. .

This dog is infinitely devoted to his family. He is ready at any time to rush to protect the owner or his property. This dog is friendly and affectionate with all members of the family, but its owner must be an unwavering authority for him, whose word is law.

He is a perfect guard dog. If the owners are not at home, he will not let anyone into the protected area. Noticing the approach of strangers or animals, the Boerboel begins to bark loudly, alerting households and warning strangers that it is his possession. A well-behaved dog must first introduce guests to the house, show them that they are not dangerous. After such acquaintance, he calmly perceives strangers and can even respond

The Boerboel breed is good with children and will protect the child no matter what. Developed intelligence allows them to clearly realize their responsibility when they are with children.

Any Boerboel interaction with children should take place under adult supervision. Due to its large size, it may unintentionally harm children.

Gets along well with animals. Able to be friends even with cats and birds. If the Boerboel has grown up with them, he can let them eat off his plate and let them go on his couch. But in any case, the desire to dominate everything is necessarily present.

By nature, Boerboel is awarded with good health. The strong immunity and healthy body of these dogs is partly due to the natural selection that the ancestors of modern boerboels were forced to go through.

There are very few diseases characteristic of this breed:

Boerboels are easy to maintain:

It is necessary to teach hygiene procedures from an early age so that there are no problems in the future.

How long does it take to walk with a Boerboel?

Boerboels need to expend energy, so you need to walk with them actively for a long time, about 1.5 hours a day.

Are Boerboels cold in winter?

Boerboel is an African dog, smooth-haired, without undercoat, therefore representatives of this breed freeze in winter. In sub-zero temperatures, it is recommended to put on a dog blanket for a long walk.

Will a Boerboel get along with a cat?

Yes, Boerboels generally get along well with cats.

How do Boerboels react to other dogs?

They can react aggressively towards other dogs, so keep an eye on your pet when out walking.

Is it possible to keep a Boerboel outside?

It can only be kept outdoors in summer. Boerboels are cold in winter.

In the large moloss family, South African boerboel is not the last place. The breed is quite ancient. This is confirmed by engravings and paintings discovered in Egypt by archaeologists, paintings with dogs resembling boerboel depicted on them. Similar products have been preserved on the territory of the African continent.

South Africa is considered the birthplace of Boerboel. Although scientific studies have shown that breed roots can be found in all parts of Africa. The history of these dogs dates back to the mid-seventeenth century.

During this period, Europeans began to settle in the African expanses. They organized the first settlements, colonies. In order to survive, they not only had to maintain farms, but also fight with Aboriginal tribes. In this Europeans were helped by bullenbeysers. These powerful dogs guarded the property of the owners and took part in battles with African tribes.

Bullenbeysers crossed with local mastiffs. The resulting offspring possessed great strength, power, endurance and fearlessness. A new type of dog was called “South African Boerboel.” Representatives of the breed were able to tolerate the African hot climate. Also, they did not retreat even before such an adversary as a lion.

Boerboel dogs were brought to European countries. For some time, African dogs were successful, but in the twentieth century their popularity, and with it the number declined sharply. It got to the point that the breed was on the verge of extinction.

The revival, restoration and improvement of the boerboel occurred at the end of the twentieth century. Enthusiasts traveled all over South Africa to find purebred Boer dogs. These animals were used in breeding work. As a result, in 1990, Boerboel dogs regained popularity. Although in some countries the breed is prohibited not only in breeding and keeping, boerboels cannot even be imported into the territory of certain countries.

In South Africa, Boerboel, like the Rhodesian Ridgeback, is in a special position. These dogs are loved and revered. It is here that the best, world-famous nurseries in which purebred representatives of the breed are grown.