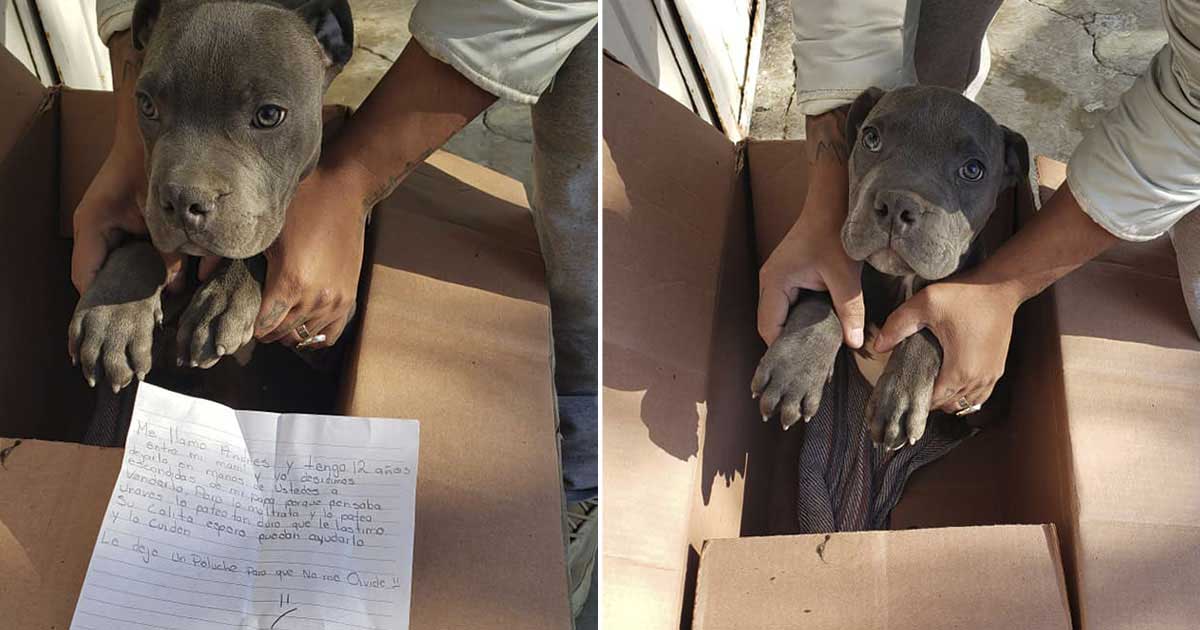 The boy left his dog at the doors of a shelter to save him from the mistreatment of his father, the gesture went viral on social networks

On February 13 of this year, volunteers from the Xollin animal shelter, located in the state of Mexico, found something unexpected at the front door. There was a large cardboard box that seemed abandoned, inside it was a pitbull puppy, a stuffed animal and a letter written by a child.

The moving letter outlined the reasons why the decision was made to leave the puppy at the shelter, apparently the boy’s father abused the dog.

My name is Andrés and I am 12 years old, my mom and I decided to leave it in your hands, secretly from my dad because he was thinking of selling it. He mistreats him and kicks him. He once kicked him so hard that he hurt his tail. I hope they can help you and take care of you. I left him a stuffed animal so he won’t forget about me.

He left his dog in a shelter to save him

The little boy seemed to be very sad, but in order to prevent his father from hurting him further, he decided to separate from his best friend and take him to the shelter to find him a new home.

The shelter posted the moving story on its Facebook page, and it went viral, moving users of social media.

We have the puppy that went viral after a 12-year-old boy decided to leave him with us in the shelter, so that he would be safe from the mistreatment that his father caused the puppy.

The cub, whom they called ‘René’, has received more than 300 requests to adopt him since his story was published.

Although it is very gratifying to know that many people are interested in adopting René, he is not ready to be adopted yet. First he must be evaluated by the veterinarian and perform the corresponding treatments.

The shelter staff regretted that no one is interested in the rest of the dogs that the place houses, which have suffered and are looking for a permanent home.

I never believed that there would be more than 300 requests from different states of the Republic to adopt René. Currently we have 120 more animals waiting for families […] If everyone opened their hearts and their homes like this little dog [René], ALL of our animals would have been adopted.

For this reason, the shelter invites all those users who are aware of this story, so that they are encouraged to adopt other dogs that need it.

Rous Segura, founder of Xollin, used her Facebook profile to thank the boy for the great act of love she had with her pet.

The dog was left for medical examination due to the injury to his tail. He will be there until he is healthy and given up for adoption.