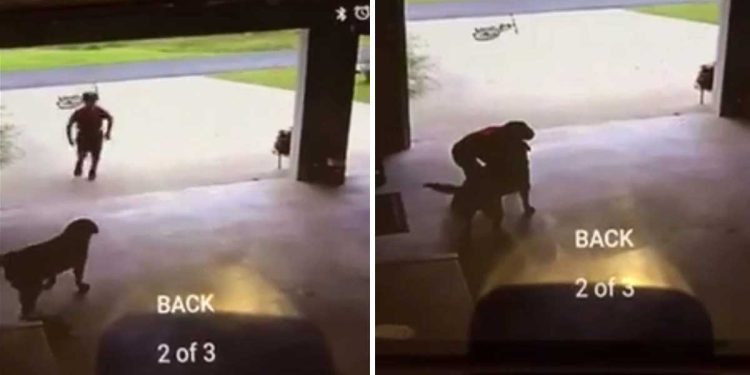 The nice guy would stop almost every day, quickly hugging the dog or playing ball for a few minutes and running away. Now he and Dutchess are great friends, after the mystery of the boy’s identity was solved.

Hollie Mallet, a resident of Louisiana, USA, had a mystery to solve. A surveillance camera installed in his garage, positioned there to catch any thieves trying to break into his property, recently captured a child “stealing hearts”. The little guy quickly sneaks up to hug the dog, gets back on his bike, and rides off.

It wasn’t the first time the boy had done this. Hollie wasn’t upset, quite the contrary. So he posted the video on Facebook in hopes of bringing the cute secret out of the shadows.

Attention neighbours! Anyone know who this sweet little boy is? Once in a while when he’s riding his bike, he comes quickly to like my dog ​​or play fetch really fast, but always leaves quickly like he doesn’t know if he should be there! I would like to tell her that he is welcome to stay and play, she loves the attention!

Boy sneaks into neighbor’s garage to hug his dog

Among those who saw the video, Ginger Clément Breaux immediately recognized her son Josh.

I was surprised and a little annoyed with him at first, but at the same time my heart was happy because I know how much he loves animals and dogs are at the top of the list.

Ginger says they had a dog that had been with them since Josh was 2 and passed away last year. Now the boy was very busy with his activities outside of school and they hadn’t sat down to talk about getting another dog. Dog she said maybe very soon.

Now that Hollie has solved the mystery, she was quick to invite Josh to visit his dog Dutchess to play more often, and sure enough, she accepted the offer.

Since talking to Hollie he’s been there almost every day.

Josh has a new adopted dog

Although Ginger wanted to wait a bit to bring another dog home, Josh got away with it. The family welcomed a puppy named Drake into their home. The dog came from a close family, whose son had gone to college and could no longer care for the dog.

Ginger said she relented after the heartwarming story garnered so much attention on social media. People from all over the world were calling to give the family a new dog and now Josh has a new best friend.

Josh still goes to see Dutchess occasionally. My daughter and I also stop to visit a few days a week when we are on foot. My daughter loves to play and hugs her.

I never intended not to have a dog, I just wanted to wait for the right time for us. And we discovered Drake at the right time. So I’m happy that we can share our positive story.