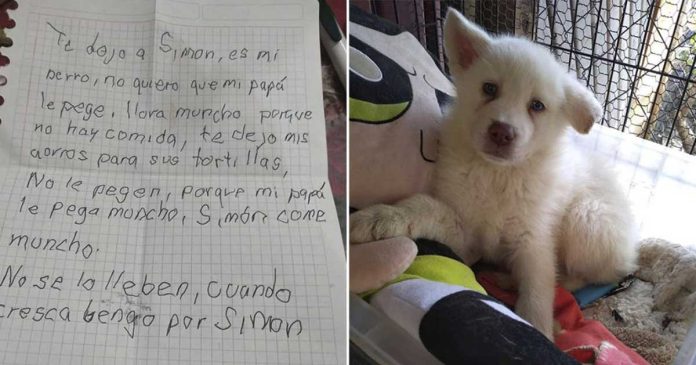 It’s no secret that dogs are man’s best friend, because thanks to their loyalty and immense love, they usually make a pretty special bond with humans Like the moving story of This Boy Who Writes letters to her dog, who had to leave a shelter because of problems in your home.

The story of the boy shocked many people, because at the age of 10 he understood the meaning of love and care for his pet. Feelings that led him to make the difficult decision to hand him over to the Pergatuzoo Refuge, located in Mexico, because he wanted to protect him from the mistreatment of his father.

The boy writes letters to his pet

Months ago, the boy decided to leave his friend Simón at the door of the shelter, accompanied by a moving letter explaining the reasons for his abandonment.

In the letter, he described the series of injustices suffered by his loyal friend and also asked the owners of the shelter to take care of him.

In addition, he says goodbye to his pet and begs the shelter staff not to give him up for adoption, since he promises that when he is older, he will come back for him.

A fragment of the letter says:

I’ll leave you with Simon, he’s my dog, I don’t want my dad to hit him, he cries a lot because there is no food.” I’ll leave you my savings for his tortillas.

The boy also asks his puppy’s new caretakers not to abuse him, because at home he suffered a lot because his father was beating him. Situation which caused the little boy to seek the welfare of Simon, and he knew he could not protect him from the injustices of his father.

Don’t hit him because my dad hits him a lot. Simon eats a lot. Don’t take him away, when he grows up I will come and get Simon.

The moving story was shared by the hostel on Facebook, in order to find Simón’s owner and his family.

Soon his story went viral, breaking the hearts of users on social media, as the boy showed he loved his dog and only wanted to free him from the pain.

Over time, Simón has grown and prospered, he still lives with the owners of the shelter where they provide him with the necessary care.

Simón is very happy with his new life, he plays and enjoys all the space in the shelter, and he often makes new canine friends.

Despite the time that has passed, the boy does not forget about his beloved and faithful friend, and recently another letter was known that he had left at the shelter.

The adorable boy’s note message was clear, expressing his feelings and his faithful friend’s lack of companionship.

The emotional letter was also shared on social media, where it managed to capture the hearts of users even more.

Simon I miss you, they told me they took you to the vet, I’ll leave you three pesos for your omelet.

For this reason, the volunteers at the shelter decided not to adopt Simón, as they hope he can find his friend. And if for some reason they have to abandon him for adoption, they will do so in a place where they will allow the child to visit him whenever they want.

For now, the boy visits his faithful friend at the shelter and leaves his savings to buy his favorite food.

A friendship that will surely be in effect for a long time to come, as the boy hopes to be at his dog’s side again.