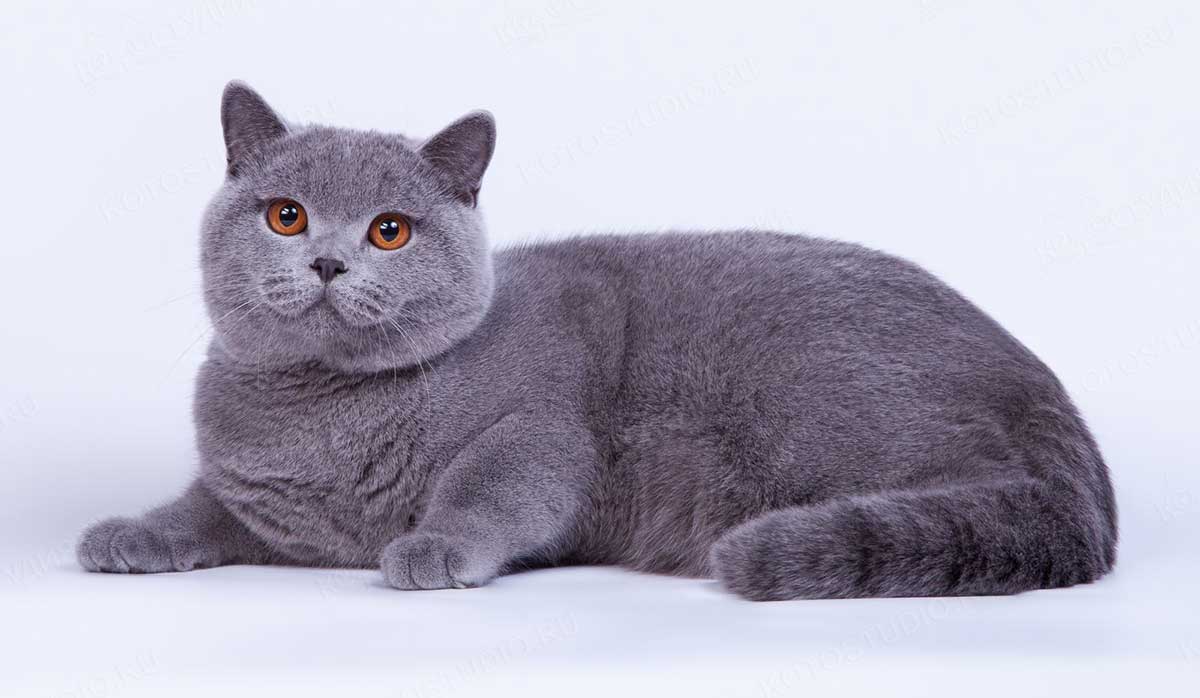 The British Shorthair is a pretty big cat breed that could be described as thick or chunky, and is considered one of the oldest and most popular breeds in Britain.

The British Shorthair cat will be a great companion for people of all ages and families with children due to its calm, cheerful character and philosophical attitude to the owners’ daily absences.

British Shorthair cats are medium to large in size, with a stocky, well-developed body, a broad chest, well-developed muscles, a strong back and shoulders, short but stocky limbs, large round legs and a thick tail, slightly curved. The head is round, massive on a short thick neck. In general, all parts of the body in animals of this breed should look massive and rounded.

British Shorthair males are noticeably larger than females – 5.5-9 kg versus 3.5-6.5 kg, respectively. Growth is fully completed only by 5 years.

The British Shorthair range in size from medium to large. These plush creatures also weigh a lot. Their weight is in direct proportion to genetics, care and maintenance. A big role in this is played by the pet sterilized or not.

The height, weight and length of animals depend on sex: females look somewhat smaller than males. To find out how much an adult pet will weigh, you have to wait 3-4 years – it is then that the formation of the body is completed and the final weight is established. It has also been noticed that the weight of a blue-colored cat is greater than that of a chocolate-spotted cat.

Males of this breed weigh 5-8 kg, castrated representatives reach 10-12 kg. The weight of females is about 3-4 kg, and neutered cats can reach 7 kg.

British shorthair cats are “natural giants” of the feline world. They are kind and loving towards humans and other animals. These cats do not continually seek the attention of humans and are quieter than their eastern counterparts, with whom they also do not share the curious nature that drives many eastern breeds into trouble .

These cats are calm, cute smart and gentle cats. They are much more active than other breeds that are related to the Persian. However, with age, these cats prefer not games but the opportunity to sleep peacefully. British Shorthair cats are balanced, sociable, unobtrusive, independent and loyal to their owner.

Cats of this breed usually give birth to 1-2 kittens in the litter. They usually do not need help with the birth of a baby. These are very loyal and caring mothers who do not shift the care of kittens on the shoulders of the owner.

These are very peaceful cats, so you can safely house a British Shorthair cat in a house where other animals already live. They do not require much attention and are easy to train. By the way, that’s why they like to shoot in movies and commercials.
This is a great breed for modern city dwellers.

The health of the British shorthair cats is not a serious concern for specialists. But breeders who claim that British Shorthairs are generally not prone to disease are shamelessly cunning. Yes, there are no specific British shorthair diseases, but there are some that affect any pedigree cats – including genetically determined ones, therefore, appropriate medical research must be carried out before animals are allowed to breed.

British Shorthair cats are generally considered healthy cats, with an average lifespan of 12 to 17 years.

British shorthair cats are easy to care for, as their short coats are virtually trouble-free. To remove dead hair, simply stroke the animal with a damp glove or comb the coat with a soft brush.

Every week, the owner should inspect the pet’s ears and clean them with cotton swabs soaked in hydrogen peroxide.

It is also important to periodically rinse the eyes of the animal with clean water or tea. With frequent tearing, a decoction of chamomile is used to remove mucus.

The British cat itself is very clean and its tray should be kept clean. Otherwise, the cat will find another place to go to the toilet.

The British Shorthair is by far the most famous cat breed in the UK. Although there are only written records of the existence of British shorthair – since the beginning of the twentieth century, the breed goes back hundreds of years. The first British Shorthair cat has probably arrived in Britain with the invasion of Roman troops and has been present in prints and paintings over the centuries.

It has been exported in large quantities to the New World, where it has become very popular. The variety of colors and fur patterns available today is due to the selective reproduction of the best stray cats in the 19th century and the careful reproduction plans preserved to this day.