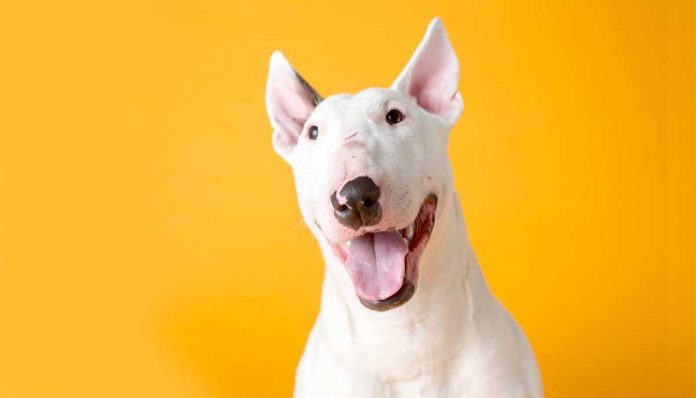 The Bull Terrier is a breed of dog that can cause the most conflicting opinions in many people. The most common question is: what is the danger of a bull terrier?

A person who does not know the breed can assume that bull terriers are aggressive, hostile, uncontrollable, because even cases of their attack on a person are known.

But the breeders claim that dogs of this breed are distinguished by their extraordinary friendliness, courage and sincere loyalty to their owner. But in order for a dog to have only the dignity of its breed, it is important to educate it correctly.

Among many people, there is an opinion that the Bull Terrier is a dangerous dog, because it was originally bred as an active fighter and, of course, has not lost its strong character traits over time.

The founder of the breed is the Englishman James Hinsk. It was in England that the bull terrier was first bred, but it is not precisely established which dog breeds were its progenitors. Historical facts indicate that initially, after crossing a supposedly Dalmatian dog, a bulldog and a white terrier, the Bull and Terrier was bred. The dog was distinguished by super endurance, fearlessness, complete indifference to pain. In appearance, the Bull and Terrier resembled a “steel machine” – large size, powerful croup, short legs and powerful jaws. The new breed of dogs actively participated in battles and almost always defeated rivals of other breeds.

A little later, James Hinsk thought about breeding a new breed of dog that would have a more pleasant appearance compared to the Bull and Terrier, but would retain its strong character and excellent fighting qualities. The beginnings were crowned with success, and after the Bull and Terrier was crossed, presumably with a Dalmatian or Spanish Pointer, the result was a modern Bull Terrier, distinguished by strength, courage and unique appearance.

In England, bull terriers participated not only in dog fights, but also served as excellent rat exterminators. Aristocrats and hunters even held rat-catching competitions, and it was the Bull Terrier that always won and broke records.

The fighting dog took part in various contests and exciting events, and not only as a cruel and fearless fighter, although the bite of a bull terrier could well have caused the death of an enemy.

Until about the middle of the last century, none of the people would have thought that the Bull Terrier could pose a danger to humans. It would seem that this dog combined all the best qualities, but it had absolutely no shortcomings.

The Bull Terrier confidently moved from the rank of a fighting dog to the privilege of a pet – he accompanied the gentlemen for a walk in the park, played well with the children, and friendly welcomed the guests of his master. Why has the dog become a symbol of aggression and uncontrollability in these years?

Why is the bull terrier considered dangerous?

It should be noted that any dog ​​can pose a threat to health and even human life, be it a German shepherd or a small lapdog. Aggression and anger in a dog is developed by the person himself by wrong actions in relation to his pet.

A similar situation happened with the bull terrier. The main reason for the persecution of the breed was inappropriate human behavior towards the bull terrier. Some people got themselves a dog not at all for noble purposes and not for the “soul”. They wanted to educate a small but powerful dog as an instrument of “murder” so that it would take part in bloody massacres and win one hundred percent.

To foster anger and aggression, dogs were pitted against animals, as well as poisoned on people. The result of such human behavior was that improperly brought up bull terriers began to be considered an evil and unbalanced dog, which, if desired, can even bite the enemy.

After the spread of negative opinion about the breed, bull terriers began to be euthanized and poisoned. A little later, a ban was issued on the popularization of these dogs. In Germany, it even got to the point that the government forbade the population to breed bull terriers.

Today, dogs of this breed are not common, but in almost every country there are bull terrier clubs, kennels and, of course, breeders of such dogs.

Cynologists specializing in breeding bull terriers responsibly comply with the exterior and typical requirements for the breed, so you can always buy a beautiful and necessarily healthy puppy from them, which in the future will delight its owner with devotion, poise of character, courage and courage.

Character features of the bull terrier

Bull Terrier owners speak warmly of their pets. These dogs are very loyal and devoted to their owner, the dog will always defend the person dear to her.

Bull Terriers are very sociable, they love to be in public places, meet new people and have pleasant experiences.

The main character trait of such a dog is activity, for this very reason the bull terrier needs constant movement, long walks, games with fellows and a splash of accumulated emotions.

A distinctive feature of a dog is stubbornness, it is this trait of her character that she tries to apply everywhere – both at home and on the street, and when working with a dog handler. Moreover, bull terriers are by nature leaders, and the owner should stock up on a lot of patience in order to suppress this unpleasant trait in the character of his pet.

How to raise a bull terrier and make a dog an obedient family member? The main thing that is required for the correct upbringing of a dog is the firmness of the owner’s character: if once a ban is given to something, then the dog must always strictly adhere to it.

People themselves are to blame for the opinion that the bull terrier is aggressive. Only the wrong upbringing of the puppy leads to negative consequences, first of all, for the owner himself.

It is possible to properly raise a bull terrier at home, but for this it is important for the dog owner to know a few basics:

Since the bull terrier has a confident and strong character, it is more suitable for men. It is not recommended to have bull terrier puppies for single women, as well as for elderly people who are not always able to adequately raise a fighting dog.