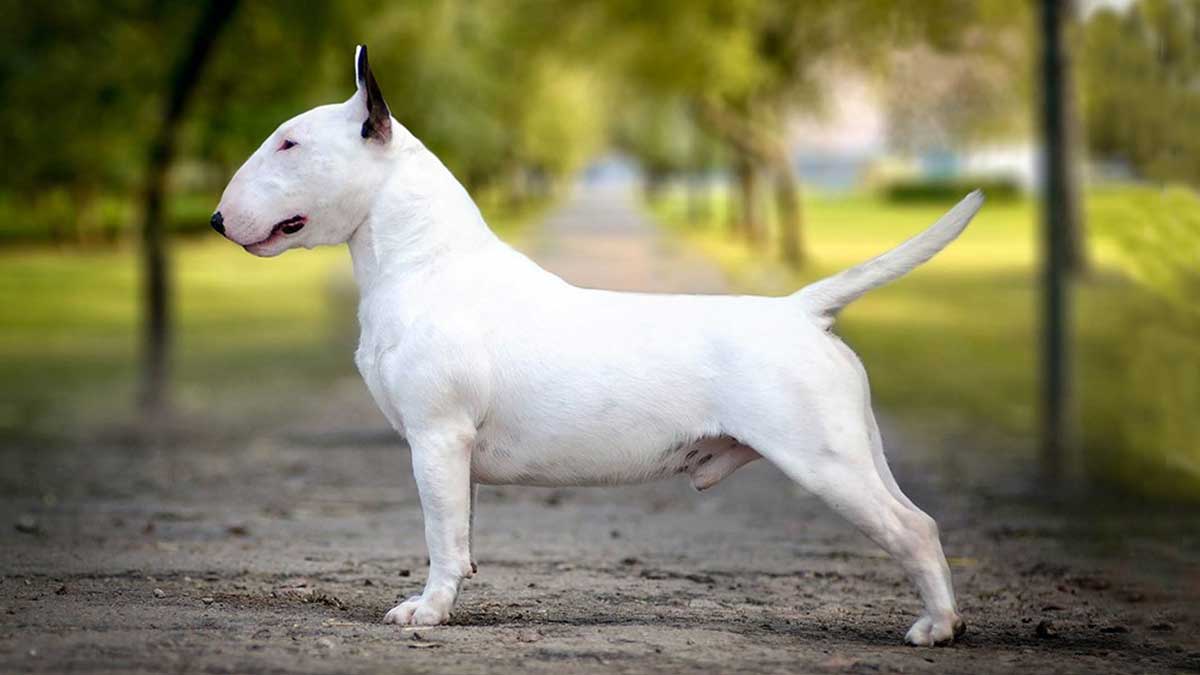 The Bull Terrier is an incredibly cute and funny dog, but only if he is properly bred and socialized early on. This dog needs a steady hand and an active lifestyle. If you don’t pay enough attention at this time, the dog may become aggressive in the future. But if you can give it away, you are guaranteed to be a devoted friend for life!

The English Bull Terrier is a breed of dog known for its unique head shape and small triangular shaped ears. There are two variations of the breed: the Bull Terrier and the Miniature Bull Terrier. It was developed in Britain as a show and fighting dog by James Hinks. He is recognized as the white knight.

Despite their intimidating appearance, Bull Terriers are very friendly and loyal if properly bred.

Physical characteristics of the Bull Terrier

The Bull Terrier dog is characterized by a strong complexion with well-developed muscles, this dog is also flexible and easy to move.

According to the adopted standard, bull terrier dogs are:

The coat is short, smooth, stiff with a slight sheen. In winter, a small undercoat may be present.

White bull terrier dogs can have pigmentation cakes and dark markings on their heads. In “colored” dogs, the primary color should prevail (over white).

Size and weight restrictions for bull terrier dogs are not specified in the standard, the main thing is that the dog should be harmoniously bent and not appear large. In this case, for reference, the average growth of males is 45-55 centimeters, and the average weight is 22-38 kg.

It should also be noted that there is a separate breed – a miniature bull terrier, the main feature of which is that dogs should not exceed 35.5 centimeters in height.

These dogs are overly active and therefore need regular physical activity, where they can expend their energy.

Character and temperament of the Bull Terrier

People who do not know the Bull Terrier often imagine that these dogs are aggressive and sometimes out of control, because breeders did not breed this breed as a companion dog.

Nonetheless, you just need to get to know this breed better and you will never turn your tongue to call out bad bull terriers again. They are absolutely sweet and fun creatures, very open to people, at least if the dogs are properly bred and well socialized.

Representatives of this breed are very loyal and madly attached to the owner. They need the owner’s attention and care, an active hobby, energetic play. Only in this way will the bull terrier feel necessary and useful. If not, the dog may start looking for completely different ways to prove his “usefulness” to the owner.

If a bull terrier is raised correctly, it can be a great friend to a child of any age. However, remember that dogs can be very jealous and selfish, choosing only one owner in the family. In some cases, dogs are able to demonstrate an aggressive attitude towards the children of others (most often this is due to the sudden movements and high-pitched sounds that children make). To avoid such situations, the animal should teach him not only his own, but also other children from an early age.

Also, if you always take the bull terrier to a family with children, remember that this is always a dog with a serious character and you should not let the child offend the dog and make him hard, because then she can fend for herself!

The Bull Terrier is a fairly active dog and loneliness can tolerate quite negatively. He needs a humane society, and a long stay alone with himself can lead the dog to not very good deeds. Therefore, do not leave this dog alone for a long time.

They are also good watch dogs: when strangers approach, they warn family members with their barks. But the guards on their part are not very good, because, contrary to popular belief, the bull terrier does not have aggression towards people. It’s just not inherent in them by nature.

You can’t tell the truth about aggression against other dogs. Here you must remember that the bull terrier is a fighter and a jealous dog. The owner of the bull terrier is very unlikely to be walking around in the company of other dog lovers. Most likely – it will be walks alone with each other.

In order to avoid unpleasant conflicts with other dogs, a bull terrier puppy should be socialized from an early age.

In some cases, these animals can get along well with other family animals, including cats. This usually happens if the dog has grown up with them. But, all the same, the owner must be vigilant to avoid excess.

Representatives of the breed do not tolerate loneliness; therefore, they do not get along with people who are often away from home.

On average, bull terrier dogs live 10 to 12 years. In general, these dogs are quite strong, hardy and healthy, but there are diseases characteristic of bull terriers:

The Bull terrier is also prone to eye problems and diseases (inversion and eversion of the eyelid), skin diseases (for example, sub-dermatitis – interdigital dermatitis), demodecosis. Additionally, white dogs can easily get sunburned if they stay too much under scorching ultraviolet light.

They make wonderful babysitters for children, but it is recommended that you keep your eyes on the animal when playing hard with your child.

It is not difficult to have a bull terrier in a small apartment, because bull terrier dogs are unpretentious animals. To make the animal’s coat look healthy and shiny, it is enough to comb and wipe it with a damp cloth every week. Because of this, it will be shiny, smooth and clean, which is very important.

It should be remembered that, like any smooth-haired dog, a bull terrier sheds twice a year – in spring and in autumn -. During shedding periods, grooming the dog’s coat is recommended daily. This will protect your house from wool in every isolated corner and make this process much easier for the animal.

As for the bath, there is nothing special about it. Often arranging water procedures for the bull terrier is not necessary. Most owners of large, smooth-coated dogs use specialized dry shampoos or wet wipes familiar to everyone to wash their pets.

Do not forget about the condition of the ears. They should be cleaned weekly with special solutions. These solutions are sold in any veterinary pharmacy or pet store.

To avoid unpleasant odors from the oral cavity and to maintain healthy teeth, you should brush them every few weeks. Nature has endowed bull terriers with strong teeth, so the owner’s task is to monitor their condition.

The claws are sheared when the need arises.

Keeping the Bull Terrier with other pets is not recommended: this breed is very dominant and will not tolerate competition.

The Bull Terrier is an active breed that requires a fair amount of exercise, both free running and jogging.

An hour of daily exercise should be considered the minimum required, although these dogs accept a higher level of activity.

Your dog’s diet should contain the proper proportion of all major nutrient groups, including a continuous supply of fresh water.

It is also important to perform regular checks with the fitness tool to make sure you keep your dog in top condition and to remember to feed him twice a day following his specific diet recommendations.

These English aristocrats are only suitable for experienced dog breeders who will take a leadership position and not surrender to their four-legged friend.

Bull Terrier dogs are extremely intelligent and resourceful. If you decide to engage in their training and education from an early age, they can easily be your reliable companions or even your watchdogs.

As soon as you have brought the puppy into the house, given the necessary vaccinations, and passed the quarantine, go socialize. First in his own backyard, then in the “dog school”. Do not start the process of breeding a dog, it can cost you dearly in the future!

The training process should be constructed in such a way that the dog is always in business and does not have time to be bored. The bull terrier is unlikely to repeat the same actions for a long time if it becomes uninteresting to him (even if offered his favorite treat). All lessons should take place in a relaxed environment.

Systematic training should be planned. At the same time, a dog trainer should be demanding, persistent, but not overly strict. Bull Terrier dogs can be stubborn, which is why, even after excellent training results, they will refuse to follow owner’s orders. This behavior must be stopped in the bud.

In general, a well-bred Bull Terrier diligently accomplishing commands is an early socialized Bull Terrier who has received sufficient attention and has been trained by an experienced trainer.

The dog needs early socialization and education, otherwise it will get out of control and bitter.

Each bull terrier is an individual with their own unique character traits. And even skillful training does not guarantee that the dog will always be diligent and obedient. But, by investing your love in it and devoting enough time to it, you will be convinced that a happy animal will respond to you in the same way. Bull Terrier dogs are true cheerful pets that can become a favorite with the whole family, from small to large.

History of the Bull terrier

A bull terrier is a breed of dog that appeared in the second half of the 19th century in Britain by crossing two other breeds – a bulldog and an English White Terrier. The name of the breed itself is taken from the English language and consists of two words – bull (bull) and terrier (terrier).

Breeders aimed to create a special breed, the representatives of which would have the fearlessness and ingenuity of the terrier, combined with the power, endurance and grip of the bulldog. And they succeeded, but not immediately.

The first representatives of the breed were much smaller than modern bull terriers. The weight of some individuals did not exceed 2-4 kg. However, over time, breeders bred animals, the weight of which was already more impressive – 22-30 kg. They can be considered the closest to modern bull terriers. Dog breeders achieved their goal – they obtained a breed that combines the best physiological qualities and properties of characters of a terrier and a bulldog.

He is an English breeder named James Hinks who deserves to be thanked for his special contribution to the breed, which he has brought to perfection. In order to obtain sturdy, powerful and quick-witted dogs, Hinks used representatives of the dog breed that has gone extinct to this day – white English terriers, as well as white bulldogs.

Born in the 19th century, the breed quickly gained popularity, especially among urban males. Soon Americans became interested in bull terriers. At the beginning of the last century, it was they who contributed to the independent recognition of bull terriers as a breed of dogs.

Then some breeders wanted to breed colorful animals. And they did. In 1936, multi-colored bull terriers were recognized by the World Cynological Association as a separate breed. However, today in some circles such dogs are no less popular than in 19th-century England.

The Bull Terrier is not the best option for protection, as it rarely shows aggression, even towards strangers.