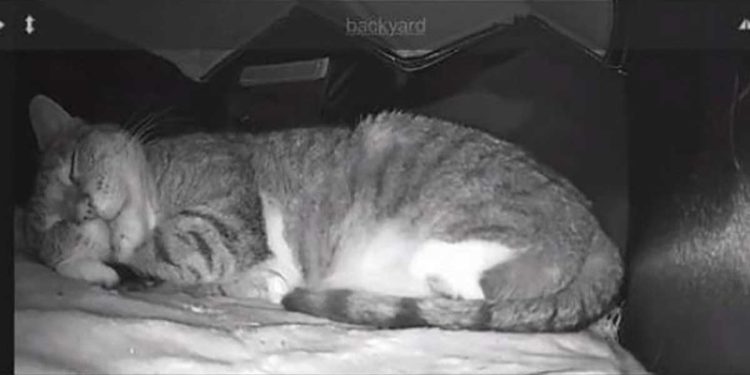 Maria Cassano noticed a few years ago that a cat was walking by the yard of her father’s house in Long Island, USA, carrying a baby kitten. Worried about them, she tried to feed them even though her father didn’t agree, and made him make an exception.

Maria was worried that because of her poor diet, the cat would not be able to breastfeed her young; she started calling her “mom” and left some food for her outside the house. The cat therefore became a permanent visitor, and the family’s new concern was the cold.

My dad is very smart and although he doesn’t like having pets in the house, he’s a really empathetic guy and he loves to help.

One of her neighbors adopted the little kitten, but mom was still on the street and stopped by Maria’s dad to eat, so the man decided to build a house for mom.

When his girlfriend and I started worrying about cats surviving the cold, my dad ordered supplies for a heated cat house, covered it with waterproof materials, built a base, and placed it in. the garden.

Soon after, the mother had another baby and, worried, Maria’s father decided to install an infrared camera to make sure they both returned to bed safe and sound. I never imagined that with this idea you would get beautiful and adorable images.

Maria eventually managed to reach out and take mom and her kitten to a local shelter to have them spayed and vaccinated.

It was fall, and the shelter said mom would be okay with going back, but the kitten was probably too young to survive the winter if left outside.

So the woman took care of the little cat to protect it from the cold, and managed to find a permanent home for it. For her part, Mom now has two other feline friends named Inky and Finky and they enjoy spending time together in the backyard.

They don’t come in or let us touch them, but they recognize us, they take a nap on the stool [or] in the garden chairs, they hang out with us in the yard and sometimes come to the window when it’s time to go. ‘it’s time to eat’.

Over time, they added extra spaces for cats.

Over the years we’ve had a few more houses and a ‘cat igloo’ for all of our residents to warm up to, I jokingly call them ‘Steve’s cat condos’.

Thanks to Maria and her father, stray cats have a warm place to spend cold nights.