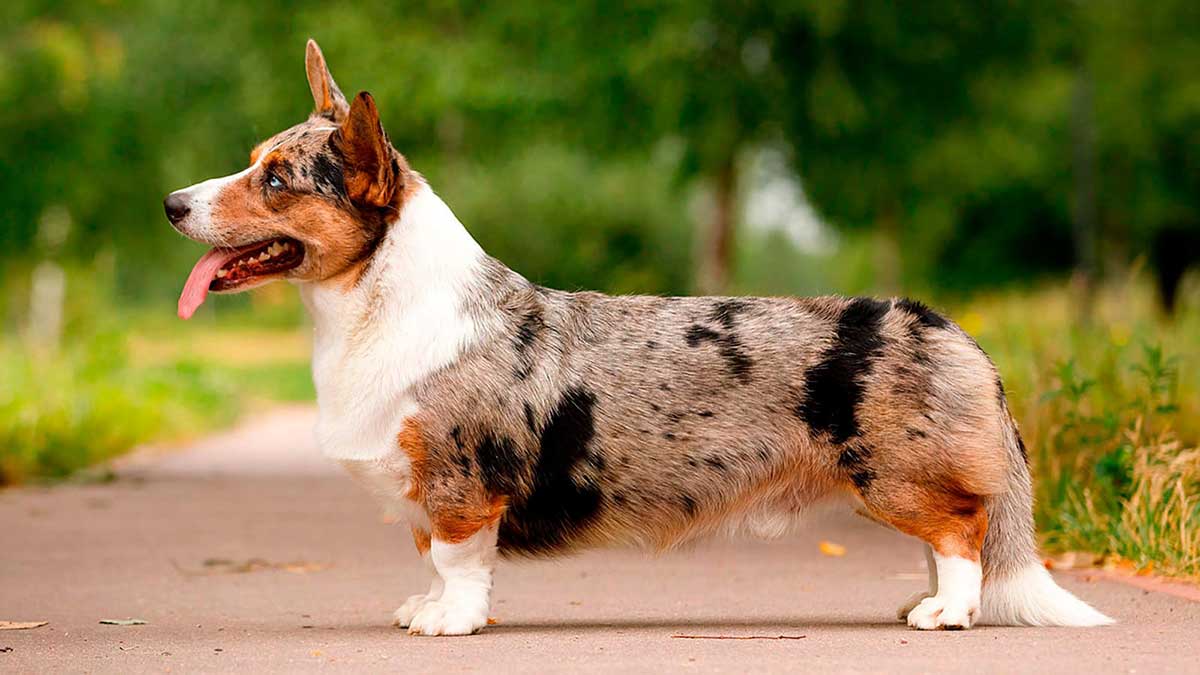 The Welsh Corgi Cardigan is a small dog that was once used as a shepherd and waiter in Wales. A close relative of the popular Pembroke Welsh Corgi, this dog is less popular than its canine cousin. But despite this, this breed of dogs has a special character which makes it little sociable with other pets and shy with people it does not know, but on the contrary, is very loyal to its human family. In addition, the Welsh Corgi Cardigan is a very intelligent and easy to train dog.

If you want to have a pet in the form of a shepherd dog, but there is no way to keep such a large animal, you can find an alternative. There is a breed of Welsh Corgi dogs, its representatives are shepherd dogs, only very miniature.

If you are interested in adopting a dog of this breed, with an adorable appearance and a small but solid and resistant body, do not miss this ‘ Pets Feed ‘ breed sheet.

The ideal height for the cross of these dogs is 30 centimeters, and the weight should go in proportion to this size. It is one of the smallest sheepdogs, although that is not why it is less effective for such work. Its robust and rustic body is notoriously longer than it is tall. The legs are short bones, but very strong and thick.

The head of the Welsh Corgi Cardigan has a shape and appearance similar to the head of a fox. The nose is black and slightly protruding. The eyes are medium and soft and vigilant. They are usually dark, but blue eyes are accepted in blackbirds. The ears are large compared to the size of the dog, erect and with rounded tips.

The tail of this dog is moderately long and similar to that of the fox. This is one of the features that allows you to easily differentiate the Welsh Corgi Cardigan from the Pembroke Welsh Corgi, since the latter has no tail or has a small one.

The coat is straight, hard in texture and can be short or medium in length. The undercoats are abundant. The coat can be any color, but white should not predominate.

Character and temperament of the Welsh Corgi Cardigan

These dogs are very active, intelligent and alert. Like most sheepdogs, the Welsh Corgi Cardigan needs a lot of physical and mental stimulation, as well as frequent support. According to the breed standard, these dogs must have a stable temperament, without being shy or aggressive. However, centuries of evolution as sheepdogs have turned them into animals reserved for strangers and aggressive with other dogs. Early socialization is very important with this breed, to prevent them from being aggressive or moody with people. It also helps a lot in canine relationships, but a Welsh Corgi Cardigan will hardly be a very sociable dog with those of its kind.

Aside from its tendency to be aggressive with other dogs and reserved for people, the Welsh Corgi Cardigan can present other behavioral problems. His strong grazing instinct leads him to be a barker and, in many cases, to nibble on his legs in his attempt to “bring people together”. These behaviors can be channeled into acceptable activities if sufficient physical and mental exercise is provided to the dogs.

Interesting! The intelligence of dogs of the Cardigan Welsh Corgi breed is so high that they are able to learn a new command the first time, and the ability to learn is manifested literally from the second month of a puppy’s life.

Important! For all their charm Cardigan Welsh Corgi are shepherd dogs, and they have some stubbornness, and can also ignore rough treatment and shouts.

The Cardigan Welsh Corgi, like all herding dogs, is naturally endowed with good health and strong immunity. But there is still a predisposition to some diseases:

With proper care, a Cardigan Welsh Corgi lives for 11-13 years. To keep your pet healthy, you need to do vaccinations and preventive examinations in a veterinary clinic on time.

Cardigan Welsh Corgi dogs are quite suitable for apartment maintenance, since they are small in size and practically do not have a specific smell. But the owner should take into account that such a pet needs physical activity, so it will be necessary to walk it twice daily for at least 40 minutes. During walks, try to give the dog an opportunity to run and frolic.

To be objective, the Cardigan Welsh Corgi tolerates bad weather and prefer to live outdoors.

Important! Jumping is contraindicated in Cardigan Welsh Corgi puppies, as it puts a lot of stress on the weak ligaments of the spine and joints.

There are no difficulties in leaving, follow the rules below and the pet will have a well-groomed, healthy appearance:

A Cardigan Welsh Corgi owner should be aware that these animals tend to overeat. They can eat everything that is offered to them and everything that “lies badly”. Such gluttony leads to excess weight, obesity, as a result of which diseases of the cardiovascular system may occur. Based on the foregoing, feeding norms are determined for the corgi, and it is prohibited to deviate from them.

All Cardigan Welsh Corgi dogs love to eat, tend to be overweight, and sometimes are not picky about food.

They feel great on natural feeding, but in this case, the proportion of meat, that is, protein should be at least sixty-five percent.

Cardigan Welsh Corgi puppies should be fed 5 times a day and adult dogs twice a day.

Once a puppy is 12 months old, it can be fed with food for adult dogs.

Carbohydrates in the form of cereals lead to excessively rapid weight gain, so their share in the daily diet does not exceed ten percent.

Boiled and fresh vegetables and fruits, as well as vegetable oil and supplements in the form of vitamin complexes, the dog is given daily, as well as fermented milk products.

Pure milk is given only to puppy and suckling Cardigan Welsh Corgi females.

Many breeders use dry food in feeding Welsh Corgi. This is a good option for a fully balanced diet, but it should be super premium and appropriate for the dog’s physical activity. Low fat feeds are available as well as high protein feeds for stud dogs.

Important! You can not take your pet for an active walk immediately after eating. In addition, you cannot feed the animal immediately after intense physical activity: at least 1.5 hours must pass before eating.

Cardigan Welsh Corgi dogs have established themselves as easily and quickly trained dogs. The dog of this breed has the ability to learn, moreover, he is obedient and always ready to follow the orders of the owner. From the second or third time, the pet freely memorizes the commands.

But there is a problem during training, the fact is that a mobile, active corgi quickly gets bored with monotonous activities. Therefore, it is necessary to diversify the workouts, to make them more interesting. Also, harsh parenting methods cannot be used, the dog can lose confidence in the owner due to a rude attitude.

Representatives of the breed often take part in various competitions, in agility. They can be quickly taught circus numbers.

Have you decided to buy a Cardigan Welsh Corgi puppy? Check out the advantages and disadvantages of this breed first. This will help you finally decide on the choice of a pet.

Do not miss some of the most interesting sights about the Cardigan Welsh Corgi. You probably didn’t know where his popularity came from, or what the name meant:

After all the information about the Cardigan Welsh Corgi, you may be considering sharing your life with one of these intelligent animals. If this is the case, do not hesitate to look for a breed breeder of good reputation and confidence, so that I can give you all the guarantees in terms of health and genetics. Never go to private sales or pet stores, because the origin of the puppies is doubtful and you will not have the necessary guarantees concerning the state of health of the animal.

Remember that the Cardigan Welsh Corgi has its own unique temperament, so be sure to do whatever is necessary to understand it and meet its needs, because only then can you have a good relationship with your pet. If you do, the corgi will be the most grateful animal, it will fill you with affection and attention, so don’t doubt that it is up to you to enjoy the company of your new best friend.

Dog lovers call Welsh Corgi fabulous animals. All due to the fact that the history of the emergence of the breed is associated with two ancient legends:

Leaving mythology and returning to reality, we learn that the homeland of the Welsh Corgi is Wales. The breed belongs to the shepherd family, however, in the minimum size. It is believed that the ancestors of the corgi are Icelandic sheepdogs or Swedish Vallhund.

These animals are on the list of the very first shepherd dogs, in their skill they surpassed almost all four-legged shepherds. Small stature, sharp intelligence and ingenuity help corgi dodge the hooves of their charges and at the same time guide livestock in the right direction.

The widespread and great popularity of the corgi was noted in the tenth century. Then every owner of the farm had such an assistant in the shepherd’s business. Despite the ability and attractive, cute appearance, it was only in 1892 that the mini-shepherd dogs from Wales could be seen at the exhibition. After a successful performance and approving responses from dog breeders, the Welsh Corgi gained popularity in all countries of the world. But the real fame of these pets awaited in 1933. It was then that the future king of Great Britain presented his daughters with corgi puppies. After that, these pets took a firm place in high society.