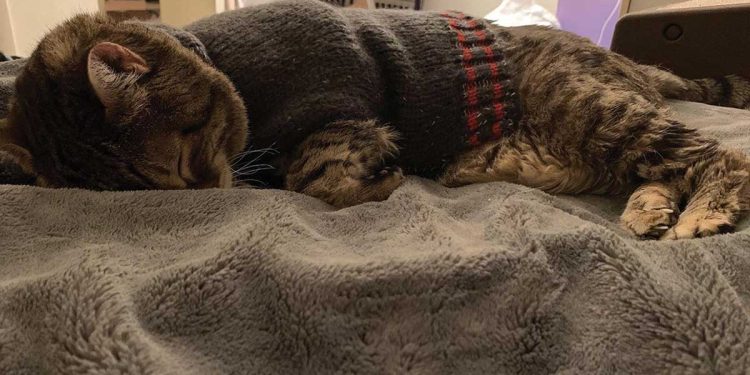 This adorable 18-year-old cat cries for hours if someone dares to take off his beloved sweater, apparently, he likes to stay warm.

Steve is a charming 18-year-old cat who has recently become famous thanks to his particular taste for sweaters. Those who have never had or interacted with a cat might consider that they are all very similar, but the truth is that cats each have big personalities.

Steve’s adoptive mother has had him in her family since she was a 12-year-old girl, and the cat was only 8 weeks old. At that time, they lived in Phoenix, Arizona (USA). The two have created a great bond since then.

A family friend’s cat had kittens and my parents took my little sister to pick one out because it was supposed to be hers. The last part didn’t work out so well – he was kept in a separate room for the first part so he and our older cat could acclimate to each other. He was crying constantly and I was sneaking up to comfort him because I was feeling bad.

18-year-old cat cries if his sweater is taken off

Since then, Steve has remained close to his mother, which at first distressed his sister a bit, who then got her own best friend when the family brought home an adorable dog.

I have an old marker-drawn ‘contract’ she gave me for my birthday a few years later saying it was ‘officially’ mine. Steve and I have had a wonderful 18 years together since then.

Steve has a great personality; he is quite a loving boy and likes to snuggle up to his mother and loves cuddles. He usually keeps her company while they read a little or take cozy naps together.

Steve likes to give his mother a few smacks on her forehead and near her neck, he’s such an adorable little boy.

Steve suffers from separation anxiety, which is why he even took a little prozac to help him eat while his mother was in college. He is also a little capricious when something does not, please him.

He’s quite talkative in general, he likes to answer me when he wants something if I tell him something. It’s also the weirdest thing: he’s not funny and falls out of bed when he stretches, he eats every plant he has access to, he tries to roll himself with bleach, he likes to try to lick off deodorant and paint, and he drools with happiness when he scratches right behind your ears.

The 18-year-old cat’s fascination with sweaters began when his mother moved from Phoenix to New Jersey. To get her bearings and put everything in order, the woman left a month earlier; the cat stayed that time with the grandparents to avoid the stress of travel.

After this time, Steve’s mother planned to fly with a friend to retrieve her feline, before that he went to get the sweater to keep him warm during the flight inside his baby carrier while they arrive at his new home.

Although he didn’t like the idea much at first, Steve ended up accepting the new sweater.

He didn’t like it at first, but when he landed, he was happy to use it. He’s an old arthritic desert cat, so I’m sure he’s fine with his crunchy bones. I don’t keep him inside during the warmer months, but it’s his third favorite thing (behind his heated bed and my heated blanket) whenever the temperatures drop.

Now the older, curious cat likes to wear his knit sweater that if someone takes it off and doesn’t return it after a while, the feline will cry for hours until he gets it back. As soon as he has put his sweater back on, Steve curls up and settles down to go to sleep.

Steve’s mom posted pictures of the 18-year-old cat and his beloved sweater on Imgur, and it went viral in no time.

I’m glad people enjoyed seeing it! He’s my best boy, so reading all the comments about people liking him has been amazing.

Many people even offered to knit more sweaters for Steve, and one Instagram user drew a great drawing of the cat’s face.

The attention is kind of funny because I’m not on social media myself, but if it makes people happy, I’m happy to provide as many photos as the internet wants.

If you want to know a little more about Steve’s life and his sweater, you can go to his Instagram account.