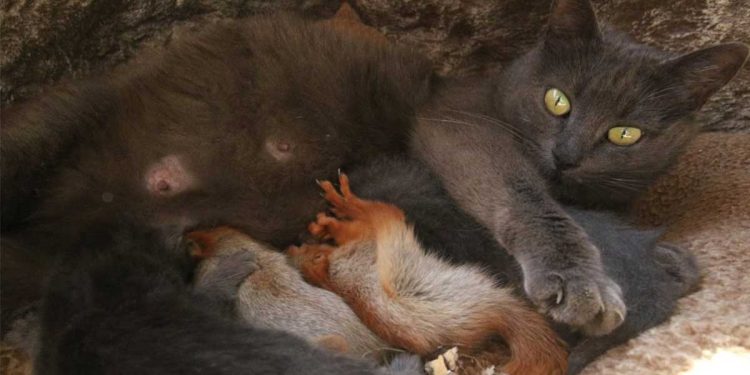 Cats are absolutely wonderful animals, there are many feline lovers who are captivated by their soft paws and sweet purrs. And although there is sometimes a misperception that they can be surly with beings that are foreign to them, more than once they have surprised us with gestures that show the greatness of their hearts.

Like what happened recently with a mother cat who, after giving birth to her four babies, did not hesitate to adopt 4 other baby squirrels who had become orphans.

The amazing mother is called Pusha and she lives in a park in Bakhchisaray, in the south of the Crimean Peninsula in Ukraine.

Olga Fateeva an employee of the miniature park, where the hairy family lives, said:

One beautiful day, some visitors brought us these wonderful squirrels in a box. At the time, our cat had just given birth. We decided to present them to her and she accepted them. She started licking them, they were a little scared, but then they got used to her and understood that she was their second mother.

The mother immediately understood that the squirrels desperately needed a mother as much as her own babies, and she welcomed them as her own.

Instead of exclusively caring for her own little ones like any mother would, or keeping squirrels away like pesky mice, she decided to care for them.

Pusha even allows squirrels to drink her milk as if they were her own kittens.

Footage captured by park workers shows that a true mother’s love has no barriers.

At first, the 4-week-old babies were afraid of their new mother, but later they realized that she was there to act as a surrogate mother and they received nothing but love from her.

Pusha can’t produce enough milk for her 4 kittens and 4 squirrels, so park workers feed the other babies goat’s milk from a small bottle.

The new brothers eat, sleep and play together in the local park as a family, even though they are not of the same race.

In the video captured by the workers of the place, we see the squirrels sleeping curled up next to the cat.

At other times, it seems even the mother gives kisses to make them feel protected.

The images have gone around the world demonstrating once again the nobility and generosity that an animal’s heart can contain, teaching the greatest lessons to human mothers who often reject their babies.

Squirrels love to hug their new mother, climb on top of her and play in the park. Pusha lovingly licks them, nudging them when they misbehave.

The family now sleeps together, they follow each other, climb and even fight for milk.

While some women abandon them, terminate their pregnancies or neglect them, other “incredible mothers” let us see the best side of their authentic maternal instincts.

It’s a chance to have this magical moment, don’t leave without sharing this great manifestation of true love.