Cat And Dog In The Same House. How Do They Live In Peace? 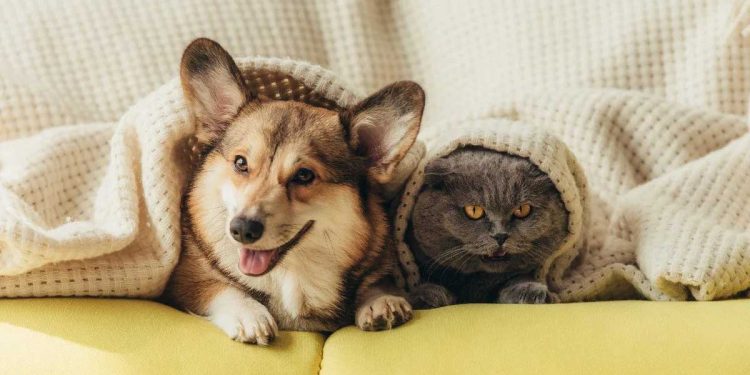 It has long been believed that a cat and a dog are always at odds with each other. Examples of hostility can often be seen on the street: dogs chase cats, and cats scratch curious dogs’ noses. There are also many stories and proverbs related to the occurrence of conflicts between cats and dogs.

But is this hatred between them so strong? Although this is not so noticeable, many people have a cat and a dog. Of course, it is necessary to make some efforts to make friends of these animals, but this is definitely possible.

Why cats and dogs are feuding?

The cat and dog are predators, which means rivals. They tend to compete with each other. In addition, the difference in behavior is a difficulty. When communicating, animals use body language.

Communication between cats and dogs can be compared with the communication of people in similar, but still different, languages. Pets begin to understand each other over time, but in the beginning, they may have problems.

Dogs are stronger than cats, therefore they pose a threat to them. The cat can get scared and run, thereby provoking the dog to chase after it. During the chase, the hunting instinct seizes the dog more and more: it begins to chase rather for fun, and by the end of the chase it may chase not with such good intentions.

As a result, a dog that previously showed friendliness can injure a cat. Some dog breeds are more likely to treat cats as if they were prey (primarily hunting dogs). Never let a dog chase a cat, including on a walk.

Cats and dogs are also prone to jealousy. Lack of attention in relation to one of the pets will also lead to a negative reaction of the deprived pet. Very often, a new member of the family is given more attention. This puts the newcomer higher than the other members of the “pack.”

So, the beginner becomes an outcast among other pets. Many are sure that cats do not need to communicate as much as dogs. The statement is not true: cats often show less love for humans, but this does not mean that they love him less.

It is natural for a Cat and a dog to fight for territory, because their survival depends on this. Let them not suffer from the new tenant in the house, but instincts still remain. Both dogs and cats guard their area. Even in relations between dogs, accepting a stranger in a pack is always problematic and dangerous.

Cats are single, so they generally do not accept anyone in their territory. However, at home, where there is always prey, instincts are still weakened.

How to introduce and make friends a cat with a dog?

The easiest meeting will be if you have a kitten and puppy at the same time. Their instincts are not so strong, they have not yet defended the territory. Introducing adult pets will be much more difficult.

The first meeting, in any case, should happen only when both pets adapt. Do not give animals the opportunity for physical contact during the first meeting.

If the Cat and the dog are adults, then it’s safer to use a muzzle and a cat carrier when meeting pets. With a successful first meeting, it is worth giving the animals a treat to encourage them, as well as making the first meeting more enjoyable. A cat should always have the opportunity to run away: no need to keep her next to the dog by force. At first, it is worth keeping a new family member in a separate room.

Have a puppy if an adult cat lives in the house

When meeting an adult cat and puppy there are no special difficulties. It is necessary to let the puppy adapt.

The cat and puppy must get used to each other’s smells. To speed up this process, you can give each other litter and toys to each other. Before the first meeting, it is better to tire the puppy a bit by playing with it.

An active baby should not be allowed to immediately pester a cat. During the meeting, the cat usually behaves quite calmly, over time, begins to treat the puppy like a kitten.

Have a kitten if a dog lives in the house

Acquaintance with an adult dog and kitten is more and more problematic. A dog can perceive a kitten as a prey or a toy.

If the dog is calm about cats, then the acquaintance is likely to go quite smoothly. Otherwise, you need to put a muzzle on the dog and use a leash to control it. If the dog will show aggression, it is necessary to pull it away.

In any case, the first meeting of the pets should take place under strict supervision.

In order to create and maintain friendly relations between a cat and a dog, it is necessary to observe some rules of behavior. The main mistake of the owner is the unconscious inducing of jealousy in animals. Avoiding conflict if pets are provoked is virtually impossible.

When a pet eats, personal space is especially important for him. Only the owner of the animal can break it. In order not to give pets a reason to violate the personal space of other inhabitants at the time of eating, it is worth putting their bowls away from each other.

Feeding a cat and a dog should occur at the same time so that no one is offended due to the fact that they fed another pet earlier. During feeding, it is necessary to ensure that the dog does not take a portion of the cat (sometimes it happens and vice versa).

It is always necessary to give all pets an equal amount of attention. Many distinguish among pets a special, the best and favorite. This cannot be allowed. If you see that the animal is jealous, it is worth paying attention to it once again.

However, some favorites stubbornly require all the attention of the owner and are jealous of any attempt to communicate with someone else. It is not worth encouraging such behavior: the animal needs to get used to the fact that not everything should be left to him alone.

With the advent of a new family member, the struggle for domination will begin. If for puppies and kittens this ends only with games, then in the relationship between adult pets, everything can be much more serious. The owner of the animals should never lose authority in the eyes of four-legged friends, always remaining the leader of the “pack.”

To be a beloved and respected leader, you must judge the animals by justice. You can not put one pet above another, allowing him to harass other family members. Interfering in a simple manifestation of dominance, without quarrels and fights, is not necessary: ​​to find out your position in the family for pets is simply necessary.

If you correctly approach the process of meeting cats and dogs, help them build relationships, then they may well become good friends. It is important to always remember that a cat and a dog, as well as their relationship, are a big responsibility.

Before you take on such responsibility, you should definitely make sure that you can keep a cat and a dog. This is not only about financial costs, but also about attention, an attempt to understand the logic of your favorite. If you have the necessary time and desire, you can make friends even an adult dog and cat.