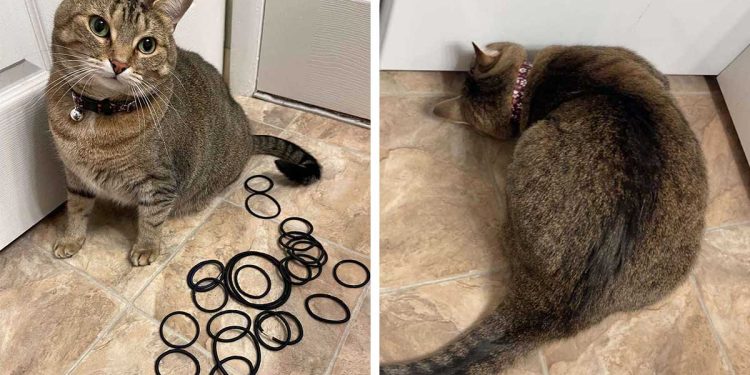 This adorable cat asks her mom for help to retrieve a hair bow and accidentally reveals her secret stash.

From an early age, Aloe was a very special feline and always refused to play with cat toys, preferring hair bows. Everything seems to indicate that they are his favorite thing in the whole world. As long as Aloe has her hair ties to play with, she’s a very happy kitty.

Recently, Anne Tam, Aloe’s mother, saw her on the floor with her paw outstretched, apparently trying to reach for something that had gotten stuck under the washing machine. The woman thought it was a hair tie and reached out to help, ending up in a big surprise.

I thought there was a hair bow stuck underneath, so I grabbed a coat hanger and put it under the washing machine. Wow, almost 30 hair bows came out!

When Aloe needed her mom’s help, she accidentally revealed her secret stash of hair ties, which probably wasn’t part of the plan, but she sure liked having them all in front of her like that, so it seems that everything went well for the feline.

When Aloe saw them, I think he was in heaven. She sat there and stared at them for a second, then started groping them all (which made some of them fly backwards under the washing machine) It was a really fun sight to see.

And of course, just because her mother found her secret stash doesn’t mean Aloe stops collecting hair bows. These are undoubtedly her most precious treasures and, as long as they are within her reach at home, she will always find a way to take them and keep them in a secret place.