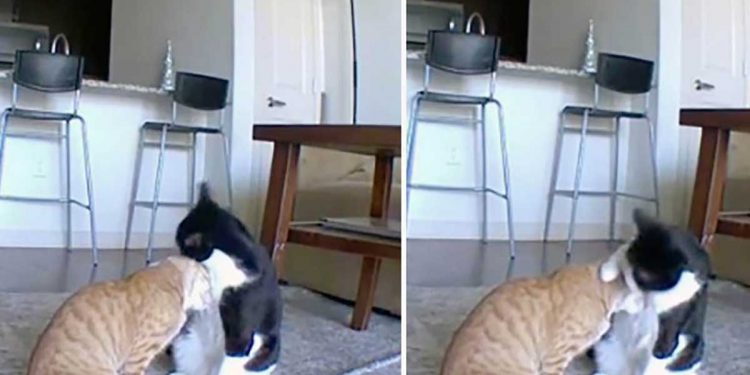 This adorable cat is filmed comforting his anxious little brother while their mother is away.

Nosy is an adorable, rather shy kitten who, when he arrived in his new family, was very aloof and was always described as very independent, but his adoptive mother thought he could benefit from finding a new friend, and apparently, he was absolutely right in this case.

Baby, another adorable feline, joined the family just over a year and a half ago and since then he and Nosy have been tightly bonded and inseparable, always sharing everything and playing fun games.

They are legit BEST FRIENDS. They cuddle all day and play and fight 24/7. When I first met Nosy, he was a bit aggressive and very lonely. This baby has put some sunshine in your life. He likes to play now and he likes to hug his brother. He’s super protective of him and always gives him a bath.

A cat is captured on camera comforting its anxious sibling

Recently, Rosa was away from home for a week, leaving Nosy and Baby home alone for a few days for the first time. Sure, he had a pet sitter who was in charge of keeping an eye on the cats, but both of them hid whenever he came around.

One day, while she was away, Rosa checked one of the cameras and saw the most touching scene of all. It seemed like Baby was feeling anxious without his mom at home. He was sitting in front of Nosy and all of a sudden, he leaned towards him, and his brother immediately put his arm around him to comfort him, it was so adorable to see them interacting like that.

He comforted his brother from the start. This experience [definitely] brought them closer. My little boy loves his big brother even more. I can’t imagine what it would have been like if he didn’t have his brother’s love and protection. Honestly, I didn’t think this kind of love could exist in animals, but it really does.

Finally, Rosa came back from her trip and of course the two cats were very happy to see her back home, but they knew they would be fine if their mother had to go back, because they have to take care of one of the other.