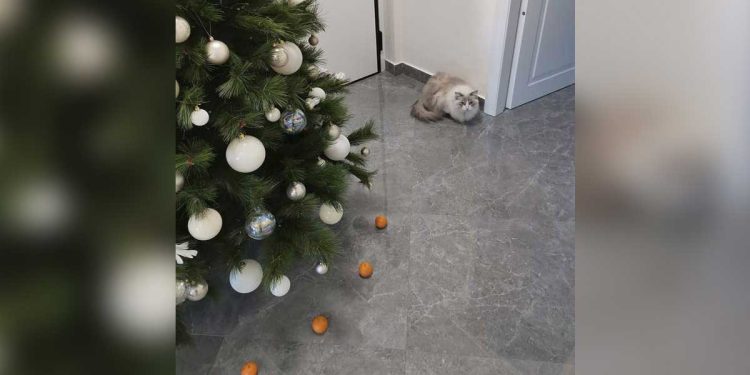 Victor is a very outgoing cat who loves everything and everyone, but there is something in the world that he fears the most: tangerines

Victor has been an incredibly outgoing cat ever since Irene Olocco brought him home. He loves to follow his mother wherever she goes and loves all the strangers he meets, but despite her trust he has a great and very strange fear.

When he was just a kitten, Irene discovered that what Victor hates most is tangerines.

We were on the couch together; I grabbed a tangerine and when I started to peel it she hissed and ran away.

The cat is afraid of tangerines

It was then that Irene learned that all orange-like fruits were Victor’s terror and that he would not approach them in any way.

As Victor has always been a bit stubborn, especially when it comes to “house rules”, Irene decided to use this new “kryptonite” to her advantage.

I started putting oranges or tangerines on the furniture where I didn’t want it going up and it worked.

Every year he steals Christmas baubles from the tree and destroys decorations, and since Irene couldn’t find a way to get him away from that, she finally had the best idea.

I was tired of telling him not to touch the balls. In the middle of the morning I decided to eat a tangerine and the great idea came to me… It worked right away!

Irene created this “force field” made of tangerines to protect the tree. As much as he loves to haunt Christmas trees, Victor hates tangerines as much, and that’s why he wasn’t going to try to upset the tree.

Irene’s Christmas tree is safe now thanks to Victor’s strange fear of tangerines.