The Cat Completely Transforms At The Age Of 7 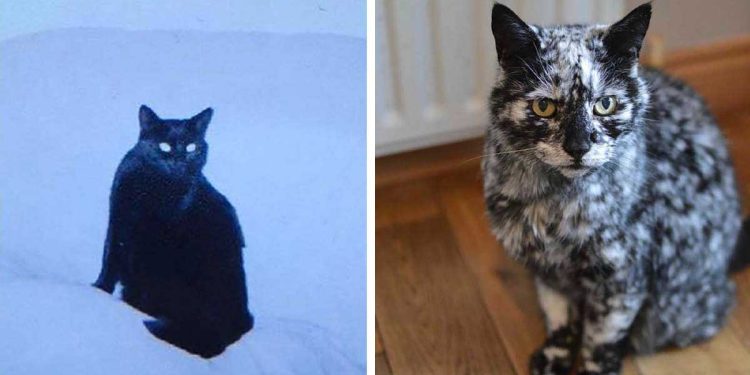 This adorable cat completely transforms when he reaches the age of seven and his fur takes on a fascinating appearance.

David who lives in London, England is a cat lover and in 1997 he brought home the charming Scrappy; an adorable feline with black fur and huge eyes. The most surprising thing happened when he was seven years old, because the cat completely transformed, changing his black fur, and ended up with small spaces of white fur which gave him a unique appearance.

David was fascinated by the change his little companion was going through. For him, it was something extraordinary, and a few years ago Mewbox did an interview with him to find out more about Scrappy who was around 18 at the time.

Scrappy sat alone and although he was a beautiful cat, we didn’t think others would consider him as cute as his siblings. I made the decision to adopt Scrappy because I knew he would be the last to be adopted, if ever.

His father says Scrappy, even in his later years, was no ordinary feline. He could hang out with other cats in the neighborhood but he didn’t do the same stupid things. According to him, his cat could be seen as the one who ruled the streets and led the pranks.

Scrappy’s change in appearance in his fur was apparently due to a condition known as vitiligo, a very rare condition that causes skin and hair to gradually lose color. Because of this, it changed color so suddenly.

This state of his fur did not affect Scrappy’s health at all, it only gave him his special and charming appearance which made him unique and gave him great popularity on social networks.

Sadly, Scrappy left this world some time ago after a long life full of love and care from his family who still miss him. His dad keeps photos of his antics on his Facebook page so we can all continue to remember the lovely feline.

If you want to learn a little more about the history of Scrappy, you might be interested in reading his book called The Adventures of Scrappy the Cat.