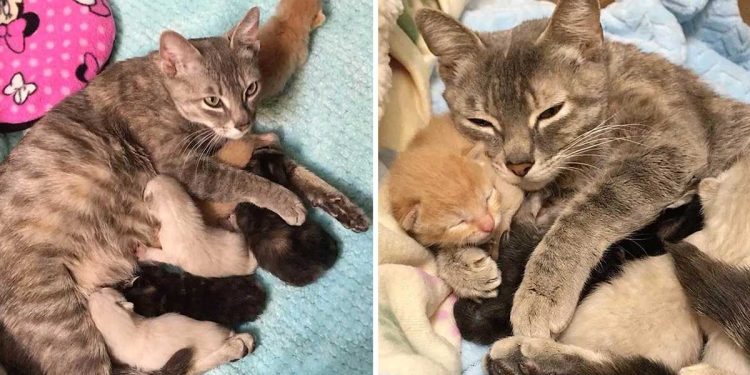 Ellen Richter is a foster family who lives in Las Vegas, Nevada. She received a notification about a rescue cat and her little babies. The litter of kittens found outside a neighborhood and may have been discovered by neighbors after two abandoned carriers were discovered.

In one was the feline mother with her babies, and in the other were two adult cats believed to be the cat’s siblings. Apparently, their previous owners decided to abandon them on the sidewalk, but luckily some kind-hearted people decided to help them.

Luckily the neighbors took them in that night and started calling for help.

A cat found abandoned in a cage is saved its life

A friend of Ellen’s saw the call from neighbors trying to get help, so he coordinated everything to get the cat and her babies back. He then took them to safety and had an animal rescue group sponsor any care they needed.

Another animal rescue organization stepped in to take in the two adult cats, where they received medical attention and then put up for adoption.

The cat, named Valentina, and her kittens were lucky enough to arrive at Ellen’s foster home last weekend. All this so that she has a comfortable place to raise her babies and receive much-needed care.

When she arrived at her new home, Valentina was very tired, so she stayed in bed with her kittens to relax and take a break.

She lay down and fell into a deep sleep. I didn’t have the heart to move her yet, so I sat down on the floor to talk to her softly, letting her know that she didn’t have to worry anymore.

Apparently the cat realized that she was finally safe in her new foster home and completely relaxed. Valentina was very grateful for her new cozy nest, but especially for the buffet of food she could access every day.

It didn’t take long for the cat to come out of her shell and show her true self, so she turned on her purr engine to rumble the whole room. It should be noted that Valentina is an exemplary mother, she is very affectionate, protective and takes care of all the needs of her capricious little kittens.

She is happy to get help from her adoptive mother to raise her babies, and she has started to appreciate all the hugs Ellen gives her.

It still amazes me that she’s so friendly, considering everything that happened to her during those two days.

Recently, the kittens have started to open their eyes, and with new strength, the little ones are becoming active and trying to move their paws.

Valentina is always looking for her babies, so she watches them closely to make sure they don’t stray too far. Without a doubt, the rescued cat is happy to have a home to raise her babies and receive much-needed help.

The cat will continue in her comfortable foster home, but when the time comes, Ellen will find her a family who will love her forever.