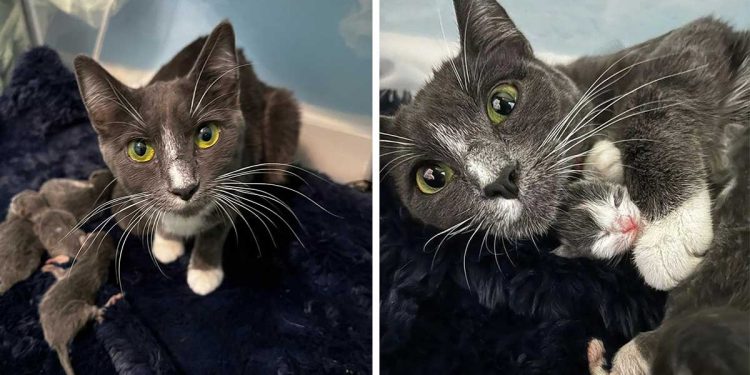 This adorable cat is found on the doorstep just in time to have her babies inside and with the help of a family.

Recently, Jin’s Bottle Babies, an animal rescue center in Phoenix, Arizona, came across a cat that had been abandoned outside the door of a family home as she was about to give birth to her kittens. The family tried to help the feline through her birthing process, but decided to seek help from the shelter when the cat was unable to nurse her babies.

Immediately, volunteers from the rescue center went to where the new mother and her little ones were to help her. The new family was transferred to the care of the shelter and its caretakers.

My gut told me to take them and find out the details later, so we did.

A cat is found at the door just in time

Shelbi’s husband, Brandon, decided to set up a space in their home to keep the new feline family safe. The babies were cold, so they were immediately placed in an incubator, and when their body temperature was fully regulated, they were bottle-fed until they were satisfied.

The kittens were returned to their mother, who was somewhat frightened by all the changes she was going through, already in the room, calm and with a cozy warm nest, the mother began to slowly relax.

Brandon set up a camera so he could watch from a distance and eventually she let the babies suckle.

It turns out that the people who left her in the middle of giving birth (at the door) have been through a tough time and have been living in their car in a park for some time now. The woman who contacted us apparently found a social worker for the family to help them.

After spending her first night in the care of Shelbi and her husband, the cat finally felt safe and calmly accepted help with her young. The kittens were very underweight and required supplemental feeding.

His entire litter of six were low birth weight, half of them in a very dangerous zone (under 60 grams). We lost one but the others are thriving.

The volunteer was on the lookout for the cat and her young to overcome all obstacles. The feline family is named after characters from the Marvel universe, Mommy Marvel and her little kittens: Natasha, Shuri, Wanda, Pepper and Jubilee.

Mama Marvel is truly a very sweet cat and enjoys the company of her new humans.

When you walk into the room and her babies suck, she rolls on her back and loves the tunes. He loves rubbing his head against you.

She’s a great mum! She only gets up from the nest to use the litter box and only eats if the plate next to her is empty. Although she trusts me, she is still nervous when I takes his babies to be weighed in. He follows me and watches me closely.

Now Mom Marvel won’t have to go through another pregnancy, she will soon be sterilized and when her babies are big enough she will find a loving forever home where she will thrive and be very happy, just like her adorable little ones.