Cat Gets Job As ‘Chief Mouse Catcher’ At Train Station 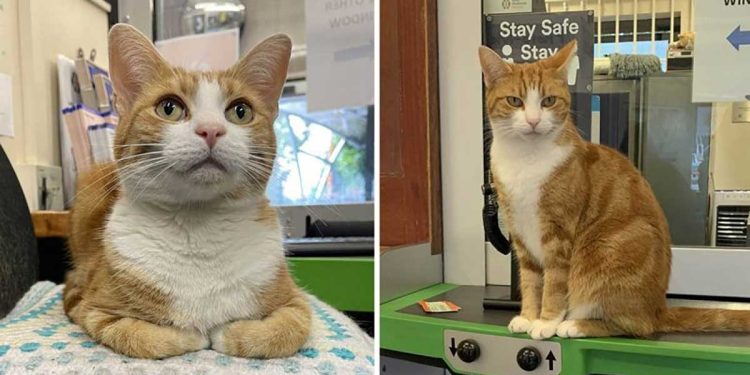 A ginger cat who’s been left to live in a train station gets an official job as the area’s chief mouse catcher.

A friendly cat gets a job at the railway station in the town of Stourbridge, West Midlands, England, and becomes the ‘official chief mouse catcher’ after offering his services for over 3 years.

The ginger kitten named George arrived at the station after his original owners had to leave the UK and were unable to take him with them. Since then, the six-year-old feline has worked hard to endear himself to people and prove that he can do a good job.

For the past three years, he has always patrolled the station and often leaves dead mice as gifts for his fellow station members.

Cat gets a job as an official mouse catcher

Now that he has spent so much time offering his good services to get rid of mice, it seems right to give him a title and an official job.

George will continue at the station, but this time as an official employee and will take on the role of “Chief Mouse Catcher”.

Plus, you’ll wear your own badge and be rewarded with a dazzling payday of nothing but sweets, delicious food, and lots of hugs from your fans.

Station manager Simone Carter said according to the Daily Mail:

George started walking around the station and was shown to the ticket office by supervisor Ian Tomlinson, 66, where he made himself at home. They formed a special bond and George often waited for Ian to finish his work.

When Ian first saw the kitten he decided to take him back to his owners, but they asked him to adopt him as they were moving overseas. Since then, George has made the station his cozy new home, it even has his own bed.

George has become very popular on the station and has fans from all over the world who send him gifts, toys and treats.

George has gained a lot of love over the years. We have created a Twitter for him and people around the world are following him. He has received gifts from Australia, Japan and even New Zealand. is phenomenal.

The redhead receives so many gifts that Ian decided to donate them to charity, so that other kittens or animals in need can benefit. But the kitty’s fame doesn’t stop there, even a local brewery has put its name to a drink called: “George’s Rail Ale”.

The best thing is that the profits from said drink will be donated to charities that are dedicated to rescuing kittens and other homeless animals.

George is loved by everyone who passes by the station and very often people look up to him, he has his own badge as he has been designated a ‘senior mouse catcher’.

George would continue to enjoy his popularity and his new position at the station until it was time for him to retire.

Ian plans to take him home once he retires at the end of 2021, as he doesn’t want to leave his best friend alone. Ian has worked for over 50 years and we have to wait and see if George will continue his work or retire with him.

They both deserve a break, but at the station they will surely miss the special services of the sweet ginger cat.