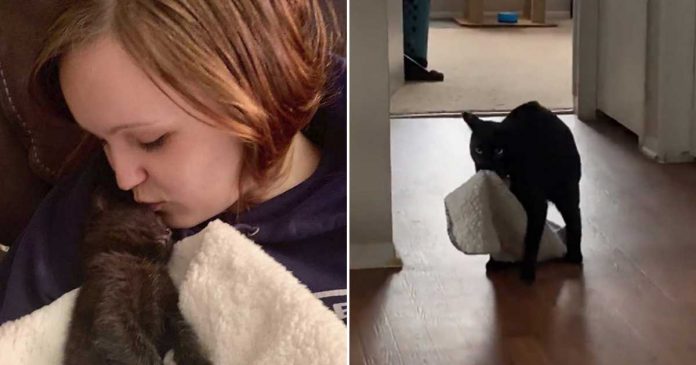 This cat insists on taking his blanket everywhere, it has become a symbol of his adoption, and he does not want to part with his parents’ gift.

One day, a litter of abandoned 3-week-old cats was taken to Wilson Veterinary Hospital, which has an in-house rescue center called The Sparky Fund. All cats were healthy except one, who had to have part of his tail amputated due to an infection.

It was then that Sara Budzynowski, who worked at the hospital, took care of the feline, and ended up falling in love with him.

About a week after that part of his tail was amputated, I brought him home to take care of him and the rest is history.

Renly can’t be without her blanket

It took Sara and her partner a few days to make the decision to adopt the cat, whom they named Renly.

They were happy about their adoption, and they began to spoil the feline, immediately giving him his own blanket and a stuffed bunny.

At 10 months old, Renly is obsessed with his blanket and plush, so much so that the cat insists on taking his blanket wherever he goes.

He’s always loved his blanket since the day we brought it home and usually takes it to his room or wherever he wants to sleep with it.

The couple decided to add two dogs, Hotchner and Azula, to their family, and now Renly as an older brother, who started sharing the blanket with his siblings.

Everywhere he goes, the cat insists his blanket be with him, and when it doesn’t, he’s with his stuffed bunny.

The blanket must mean a lot to Renly, besides being a gift from his loving parents, it has become a symbol of the day he was adopted.

Over the months this blanket has been seen often and washed several times, but I can’t stand replacing it and intend to keep it to himself for the rest of his life.