Home News Cat jumped into the arms of a girl in a wheelchair and...
0
SHARES
ShareTweet

A cute cat jumped into the arms of a girl in a wheelchair, who had been searching for the perfect pet for her for several months

A rescued feline had a surprising reaction when choosing his new family; the cat jumped into the arms of a girl in a wheelchair and never released her. Chris Poole, a person dedicated to rescuing and caring for homeless cats in his neighborhood, observed a new face in the area, a beautiful white cat with blue eyes, suddenly appeared to join the other cats and feed, repeating the action days later.

The new mascot in the neighborhood, apparently was homeless and it showed that he had been wandering the cold streets for a long time.

“Apartment complexes often have a lot of homeless cats in garbage cans, as well as cats that are abandoned when people move out.”

As the days went by, the kitten slowly became more confident with her food provider and became a little friendlier.

When the feline realized that his human friend only had good intentions, he got closer to him and allowed himself to be caressed completely.

“There was an even bigger breakthrough when I showed him the catnip and silver vine. He turned around and let me caress his belly and, in general, we had a good time “.

In this way, Chris understood that the feline wanted to belong to a home and decided to seek help from an animal rescue center to get him a house.

The Suncoast Animal League animal shelter, located in Palm Harbor, Florida, quickly stepped forward and offered to help the kitten. With the help of the catnip, the cat was captured in a human trap and said goodbye to the harsh life on the streets.

After a few days, the cat easily adapted to shelter life and became a loving animal that just wanted attention.

“He was baptized ‘Sinatra’ and it suits him well, because he is very vocal all the time.”

The volunteer seemed to have the perfect home for Sinatra, she approached Lori Griggs, who had been at the shelter with her daughter Kiley, looking for a pet for months. They had had a lot of trouble finding the ideal cat to be their pet, and Larissa was determined to help them in their search. 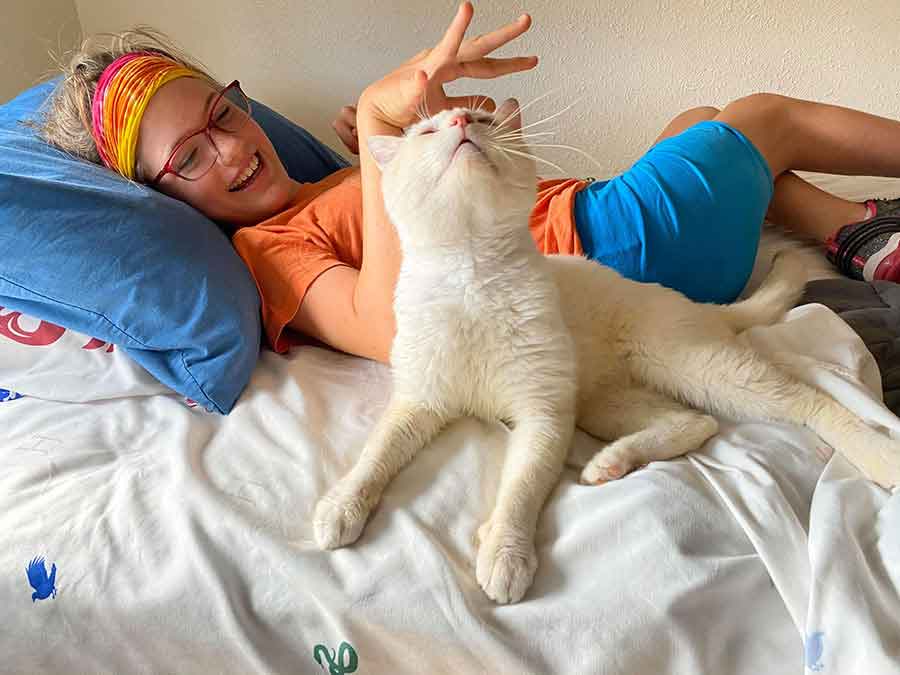 Unfortunately, Kiley uses an electric wheelchair, and most cats when they see these chairs are very scared and run away.

After visiting various shelters in order to find the right feline, they reached the Suncoast Animal League, and fortunately Sinatra made a great entry. The brave cat approached Kiley, and without thinking twice jumped into her arms and perched on her lap to snuggle snugly. 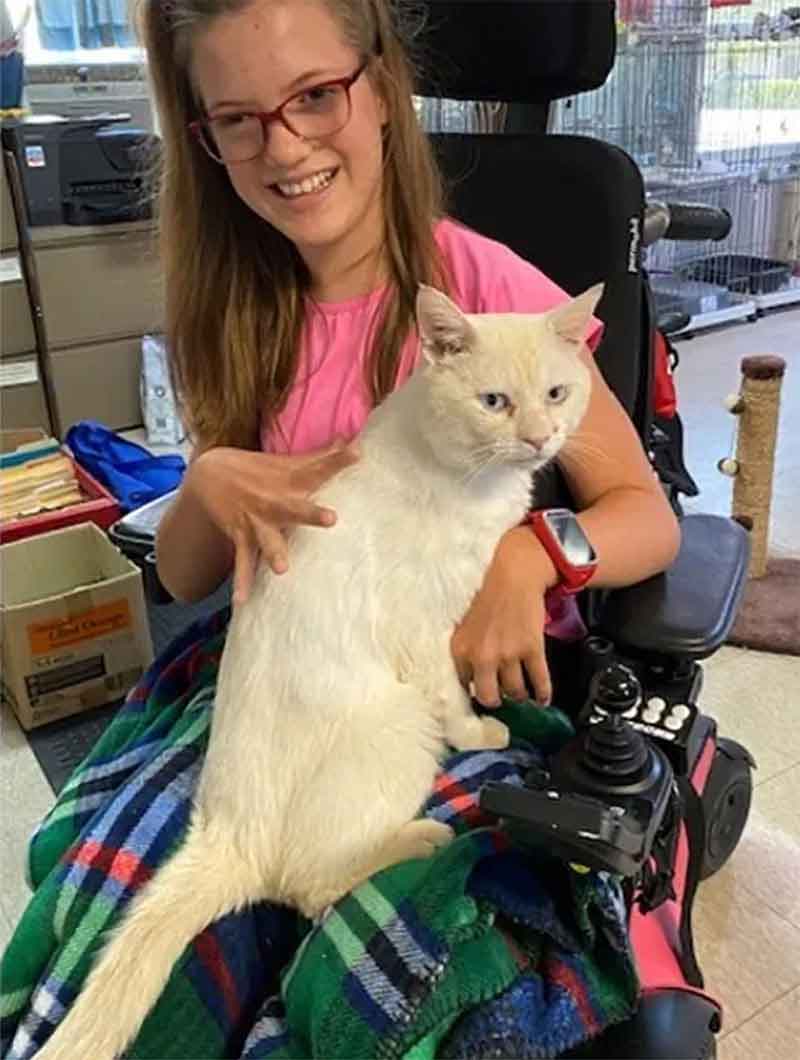 The two immediately felt a connection, Sinatra rubbed Kiley and she stroked him and put a big smile on her face. The cat was not in the least concerned with the wheelchair, preferring to sit comfortably in the lap of its new human, purring. 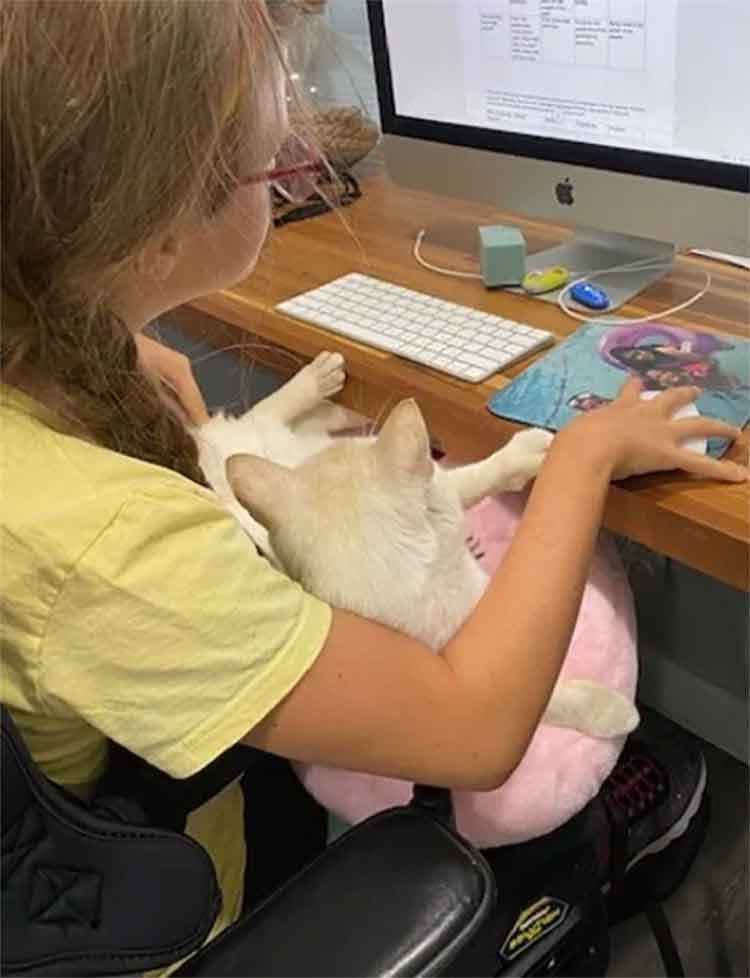 “He doesn’t care that she drives around the house. It’s actually like a speed bump and it doesn’t even get out of the way. When we opened his cat carrier in our daughter’s bed, he crawled up to her and snuggled in.”

After several months of searching for the perfect pet and many visits to the shelter, Kiley finally found her perfect feline friend. 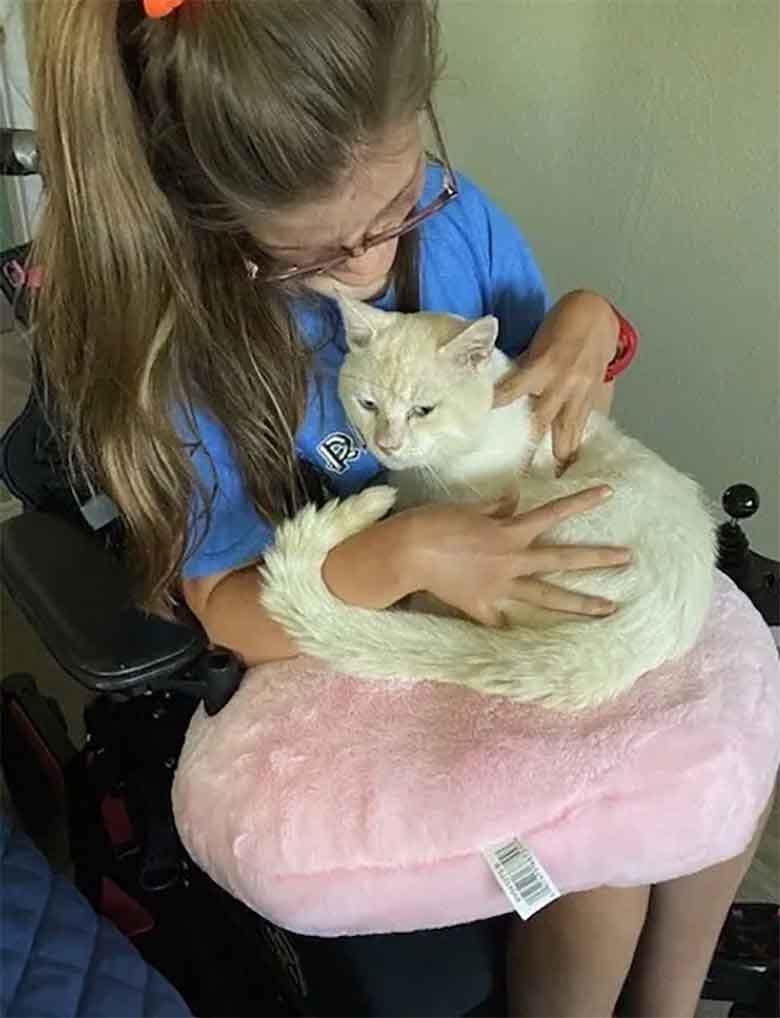 Sinatra has now become a full-time lap cat, as soon as Kiley wakes up he is ready to love and be loved.

“It is as if she has been part of the family long before. He sits on her lap in the wheelchair, while she does her school work and snuggles up all day.”

Lori works from home and her daughter remains at home, so Sinatra receives a lot of attention all day and every day.

Kiley and Sinatra became true best friends and are inseparable.

Faithful Dog Waits Daily for The School Bus with Its Young Owner to Make...