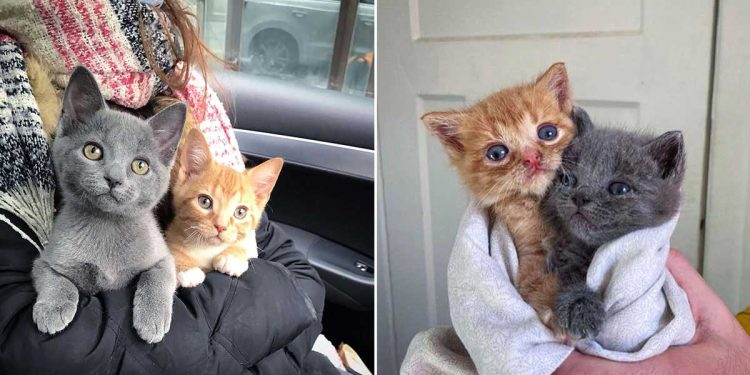 A seemingly desperate cat left her kittens on the doorstep of a family in Montreal, Canada, to have a better life.

A cat left her kittens abandoned on the doorstep of a kind-hearted family. Fortunately, the feline brothers received help just in time and their lives changed forever.

In Canada, a family found three little kittens on their doorstep; alone, helpless and without a mother by their side to offer them protection. The family waited a long time to see if the mother cat would return for her babies, but there was no sign of her.

Unfortunately, one of the kittens did not survive the weather and the family brought the other two inside and attempted to bottle feed them.

A cat left her kittens in a house

They realized their upbringing was a bit tricky, so they approached Chatons Orphelins Montreal, a Montreal rescue group, for help. At the time, the kittens were about five weeks old and had only a mixture of skin and bones. they were too malnourished.

They had a hard time eating and keeping food in their little bodies so they could absorb all the nutrients and start gaining energy. After the rescue center decided to take them in, the kind-hearted family drove over an hour to Montreal and put them in good hands.

The couple of siblings were given to us and they were in poor condition. We call them Maui (ginger) and Athena (grey), we start with treatment and a strict 24-hour feeding program.

The kittens were only half the size of a normal cat at their age and barely strong enough to lift their heads.

Although they were very fragile and thin, they never separated and held on with all their might to survive.

It’s unbelievable that they made it this far. They were so malnourished, but they kept fighting to live.

The kittens clung to their bottles like champions and started eating like there was no tomorrow; they wanted to fight for their lives.

Although they still had stomach problems, they let nothing stop them from being able to feed themselves until they satisfied their fierce and large appetites.

The kittens spent a lot of time sleeping to allow their bodies to heal and regain strength. The brothers stuck to each other like glue, and he was always on top of each other when they were napping.

Their adoptive mother was very devoted and fed them tirelessly every 2-3 hours, and after about a week they started to gain weight. Maui was the smallest cat; she had more problems and needed a lot more attention and time to recover, but Athena was her biggest cheerleader.

After two weeks of special care, the two brothers were bigger, more active and stronger than ever; They were recovering satisfactorily.

The kittens have become attached to their adoptive mother. Every time he comes in with a bottle, they climb up his arm to get his attention and cry until their food is served.

Maui and Athena have been completely transformed since arriving at the rescue center, and it’s all thanks to the dedication and love of their adoptive mother. The brothers overcame all the obstacles they faced early in life with the help of their foster family, and they will have a bright future.

Maui, which was underdeveloped, is finally catching up. He’s even smaller, but he has a full stomach and lots of energy.

The little redhead likes to be held like a baby; he is very affectionate and always seeks lots of cuddles and constant attention. Athena, the greatest, is also the most courageous; she is fearless, she is very friendly and very adventurous, she thrives carefree.

The two adorable inseparable brothers are learning to eat solid cat food, and every day they are more playful and too rambunctious. Maui and Athena are delighted with their comfortable new life as pampered cat couple, and in a few weeks they will be writing a new chapter in their lives.

The brothers will soon be ready to find a loving family that will provide them with a forever home and a better life.