People Complained About A Stray Cat In A Law Firm, So The Firm Hired Him 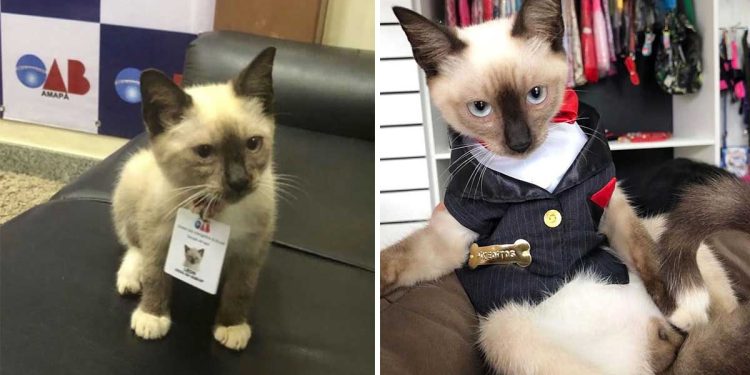 This stray cat came to a law firm fleeing a storm and people were complaining, so they hired him

Some people were angry that Leon, a stray cat, was hanging around the Brazilian Bar Organization (OAB) and complained about the kitten’s presence in the reception area. So the OAB hired the cat as an attorney to stop the complaints.

When Dr. Jeanette Laredo posted the good news that the cat became an official OAB employee, the story went viral on social media.

Now Dr. Leon the lawyer cat welcomes people to the OAB, is famous, and even has his own Instagram page where you can follow his adventures.

Leon had come to the law firm fleeing the rain and thunder a few months ago, representatives of the lawyer cat tell Boredpanda. They fed and cared for him for a week, until he was hired.

People complained about the cat because he was so small and they were afraid of being trampled on when he got to meet people.

They said there was no room for him because he is a serious institution. Then the President of the OAB determined the hiring and gave him an employee badge.

He is a good employee, so we think it is possible that Dr. Leon will have his own office in the future:

We are finalizing the documents to launch an institute for animal rights. It’s called the Dr. Leon Institute. Unfortunately, we cannot give all animals a home, so we will fund NGOs in the city. We will be an example to follow in Brazil.

Leon is a very loved cat, even those people who did not like him at first got used to the presence of him and have fun with him. He loves to be on the president’s couch and play.

Few months ago Leon was neutered and is now fully recovered. But vets say he had a problem with his vocal cords as a result of suffering when he was a baby. He hardly meows, but we continue to take care of him. This motivated us to create the institute to help abused and abandoned animals.