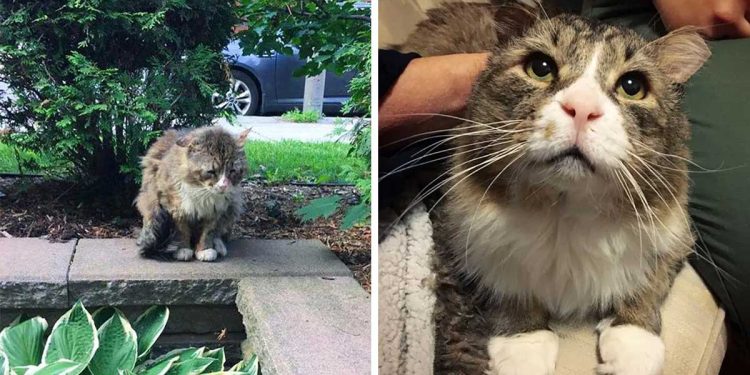 A seriously injured cat who lived a difficult life on the streets of Canada has been rescued and now has a new life surrounded by lots of love.

Many times, animals on the street and without protection often have thousands of difficulties to live, like this cat who has lived a difficult life outdoors for a long time, but fortunately his life has changed.

A very abused, dirty and unsightly cat has been seen wandering alone in the cold streets of a neighborhood in Montreal, Canada. The cat was covered in dirt and clearly in pain from its injuries, a woman named Maria-Eve saw it and her sad look broke her heart.

The woman wanted to do something, but she had to get him off the streets somehow, so she came up with a rescue plan to help him.

The cat that lived in the street is transformed

However, capturing the feline turned out to be a more difficult task than he thought, and it took him a long time to achieve. The animal has lived on the streets for a long time, which pushed its survival instincts to make the plan a challenge.

Maria-Eve tried to catch it in several ways, but the cat always skillfully avoided traps and managed to escape, it seemed an impossible task. But after almost three weeks, it seems his hunger played a trick on him and he gave in to a good bite.

The woman was eventually able to grab the feline and bring it to safety, but she had to take it to a place where it would be properly cared for.

By then, all the shelters were full, so the woman took the kitten to a veterinary clinic for general medical attention.

After being seen by the vet, Maria-Eve took care of him at home and the kitten was able to sleep in a comfortable bed all night. For the first time in a long time, the feline felt safe, cared for and pain free, but more importantly, he was getting lots of love.

Chatons Orphelins Montreal animal shelter heard about the story and offered to take care of the kitten to provide the best care.

He had war wounds, including an abscess on his cheek. His ears were frozen, indicating that he had spent at least one winter outdoors. His savior saved his life, because he wouldn’t have survived another winter.

The approximately 4-year-old cat was very nervous and shy in his new surroundings, keeping his head down to avoid eye contact. He was completely terrified by what he saw around him and it was obvious that his life as a wanderer had been too hard and complicated.

Lily, a volunteer at the animal shelter, decided to bring home the cat they named Marcel to give him the perfect foster home.

In less than 24 hours, Marcel went from being a shy cat to one who loves to snuggle and purr on his adoptive mother’s lap.

Marcel fell asleep next to his adoptive mother, it was a very promising start. Although he was surprised by some sounds, but over time he understood that there was no danger.

Over the next few days, Marcel gradually showed his true personality and began to trust the people around him more. Every time he hears his adoptive mother, the sweet boy runs without thinking and catches her attention for many hugs.

Marcel has become very pampered and still wants to be petted. The sad animal look he was found with has completely changed.

He’s had a difficult past, so the changes worry him. He carries part of his past on his shoulders, but thanks to the love and care he received in his foster family, Marcel really blossomed.

Fortunately, after two months in his foster home, Marcel embarked on a new journey to his forever home with a loving family. Now that he’s enjoying his new life, it’s hard to believe this is the same cat rescued from the streets; the sadness in his eyes completely disappeared.

His life is filled with love and a lot of joy, he will never have to repeat the sad episodes he experienced on the street.