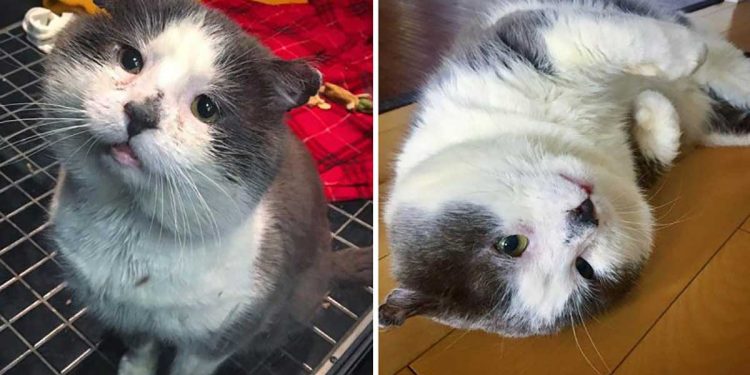 This cat lived as a stray for most of his life, he was rescued and now he has finally fulfilled his dream and has a family.

Barney has lived most of his life on the streets, managing to survive many winters and the harsh outdoor life. When he was finally rescued, he was seriously ill and was immediately transferred to Chatons Orphelins Montreal Rescue Center for urgent medical attention.

The fluffy kitten apparently received food from people in the neighborhood where he was found, but his illness was due to years of living on the streets.

When he was examined by the vet, they discovered that he was unneutered, his body was covered in battle scars and he had tested positive for FIV (feline immunodeficiency virus).

Cat has lived most of its life as a stray dog

The cat lived in a neighborhood (in Montreal, Canada). He survived the winter because he managed to fend for himself, despite the fact that one of his ears froze. People in the neighborhood fed him, but no one was taking care of him. He was a big alley cat that everyone was used to seeing.

The kitten had trouble breathing, her nose was completely blocked. Due to freezing due to low temperatures, one of his ears was affected; he also needed dental care and treatment for parasites and mites.

Despite his health, Barney just wanted to cuddle up and get some affection.

This big teddy came directly to us asking for affection. He had very big cheeks, strong muscles. He must have been the king of his neighborhood.

The vets prescribed Barney medication to fight his illnesses. About two months after his recovery, he was completely healthy and ready to be sterilized.

He suffered a lot of damage when he arrived after overwintering outside. He was lucky we found him in time to treat him. Now Barney snores a little when he sleeps. One of his eyes remains a little watery from the wound he had on his eyelid. It will remain so, these are the traces of its past in the streets. But we love him and he’s unique.

Volunteers Mathilde and Patricia took in Barney during his recovery; He was shy and tried to hide when he heard noises and people, but over time and when he experienced the love and care in his foster family, everything changed.

He adapted very quickly and changed a lot in a few weeks. He likes to attract attention and asks for hugs every day. The scared little guy has turned into a real teddy bear who likes to wait at the door when someone comes.

Finally, about six months after his rescue and fully restored to health, Barney’s dream of finding a forever home came true.

He found his perfect partner, responsible humans with love and compassion for his life and his story. He talks a lot and follows his humans around to get attention.

You can learn a little more about the work done by the Chatons Orphelins Montreal rescue center by visiting their Facebook page.