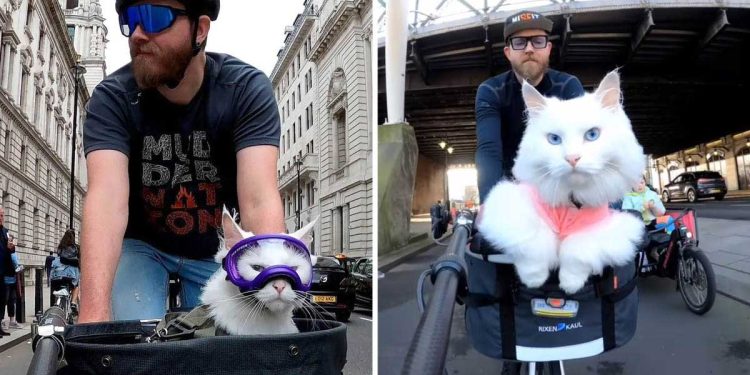 A cyclist and his kitten have caused a sensation on social media after filming and sharing all the adventures they have while cycling through the various streets and squares of London on their bikes, but the most curious thing is that this cat likes to go in front while his father leads the way.

With the fluffy kitten in his basket, Travis Nelson, 45, from San Francisco decided to tour the whole city of London as a hobby. The man, after losing his job last year, has started taking his four-year-old kitten Sigrid for bike rides.

Everything seems to indicate that Sigrid loved this idea, and now the couple go out to see the different places of interest in the city at least three times a week.

This cat likes to ride a bike

Her curious activity is so incredible that she caught the attention of passers-by and more than 50,000 followers on Instagram, where Travis posts all of her excursions and since then Sigrid has become a very popular animal.

He recently shared a video where they can be seen touring central London dodging traffic as it gets dark. Sigrid relaxes in the front basket enjoying the view, dressed in a red jumper and held securely by a harness.

Travis wrote in the description of the video:

The man told MailOnline that Sigrid has become so popular that fans are asking for merchandise featuring her kitten. They also offer to donate treats and clothes to cats in need, through some sort of campaign, but Travis prefers to keep his address private.

I received a surprising number of threats of violence; some people really hate bikers…or cats.

However, the most important thing for Travis is to have a good day with his kitten and to enjoy everything he finds on walks. People are always surprised when they see Sigrid on the bike, but then it all turns into a group of people waving warmly.

Sigrid spreads joy to the people she meets on her way and to her followers. She loves their walks, she loves going outside to enjoy the fresh air, and sometimes she stands in the doorway and moans to get them out.

Without a doubt, Travis’ cycling team isn’t complete if Sigrid isn’t in his basket, since she’s already part of the whole outfit.

Additionally, Travis’ bike has both his name and Sigrid’s name engraved on it, so people can tell them apart in the middle of rides.

Travis spends several hours a day collecting the best images, but seeing the reaction from his followers, it all makes sense.

I’m very happy with the reactions from our fans.

Sometimes when Sigrid wants to get out of the basket, she makes it clear to Travis and through a series of meows she lets him know.

Everyone loves them and they are happy to bring some joy to their followers.