Nilo is a very naughty cat who had a very well-kept secret, unfortunately for him, his double life was discovered. 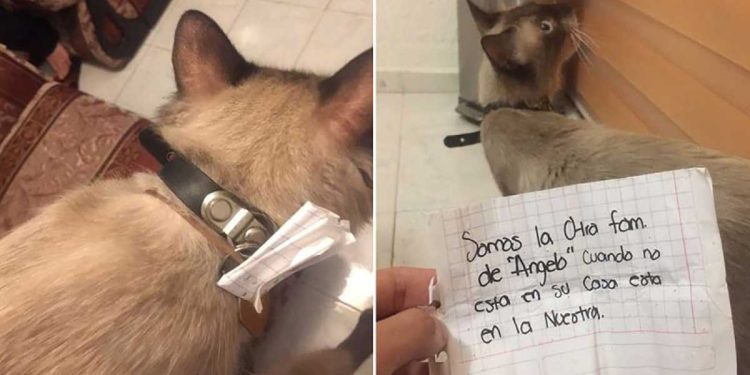 Cats are known to be very curious, but they usually get involved in a series of mischief that only they know how to do. Nilo, is a sweet cat who has a well-kept secret, well, apparently, he had a secret, since recently the truth was revealed.

Héctor Morales, Nilo’s father, adopted him when he was just a little kitten. He had been rescued from the streets and had a loving home ever since.

The owner has provided him with a comfortable and welcoming home, but despite this, Nilo has an insatiable desire to venture outside.

The cat leads a double life

Hector likes to give him freedom, because he knew Nilo wasn’t going very far. However, as the cat grew, he became more daring and his daily outings grew longer in a short time.

At first it didn’t take long, but it took longer and sometimes days went by without seeing Nilo, which worried Hector, who thought he might have gotten lost or someone had cut him somewhere. left, but he always came back.

“He always comes home, like he never left, very calm and bigger too.”

This behavior started to generate doubts in Hector, he was sure that something strange was going on, and he soon found out what it was. One day Nilo came home from his last outing on the street, but this time there was something different, he had a note next to his necklace.

It turned out that Nilo wasn’t so adventurous after all, and instead he had lived a double life and even had another name. The little note attached to the necklace said: We are Angelo’s other family, when he is not with you, he is with us.

His owner was surprised, even though he felt a bit betrayed since Nilo cheated on him, but then he reconsidered and that feeling disappeared.

“When I thought about it, I was grateful that another family took care of him and even gave him a name.”

After a few days, Nilo was ready to date again, so Hector decided to write a note to the cat’s other family in response.

Hector’s note read, “Can I have your number to leave on vacation?” PS: Nilo ate tuna before leaving.

A rather funny event between Nilo and his two families, but the most important thing is that the cat will be fine in any house.

“Cats decide who they love, we can’t deny them that.”

Even if the secret life of Nilo or Angelo will no longer be a secret, the double dose of love will continue and he will be happy to receive it.