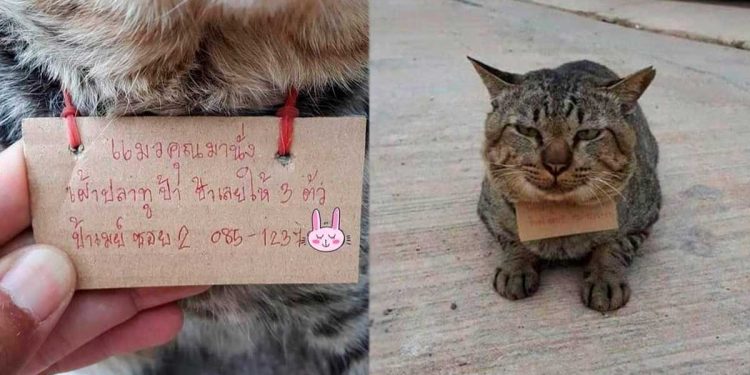 Cats are characterized by their independence, although they need our attention and care, they are usually the most independent pets, so much so that they even run away from home and return without difficulty.

The case of a cat discovered maintaining “a double life” caused a stir in the networks. The feline came home with a note that revealed he also had another family, the crafty Pixi was feeding twice as much and being pampered twice as well.

On this occasion, the story of the cat who disappeared after three days returned home with a note tied around his neck that intrigued his owners.

The cat appeared with a surprise, he had a note written by the managers of a fishmonger in the Chang Phuak district, in the Thai city of Chiang Mai.

The owner of the cat spent three days of anguish during which he did not know the whereabouts of his pet. It was unusual for the cat to run away from the house, having so many hours without knowing it that they searched the area non-stop, they were in despair.

When they saw each other again, he celebrated that he was unharmed and that he was back. When he opened the note that hung around his neck, he was shocked: “Your cat kept staring at the mackerel in my store, so I gave him three.”

The author of the note identified herself as “Aunt May de Callejón 2,” who owns a fish shop, included her phone number so that cat owners can contact her.

He broadcast what happened on his networks and in a short time reached thousands of reactions. Some users commented that there was no trace of regret on the cat’s face for going out for a treat.

The images were shared on the Chang Phuak District Facebook page.

Some users commented expressing their admiration for the fishmonger who fed the cat who must have been very hungry after spending 72 hours away from home.

Although knowing the cunning of specimens of this species, it is possible that this is not their only food.

It is assumed that he was prowling around the fishmonger’s surroundings until he reached his goal and therefore, his adventure was luxurious, with his favorite menu.

Fortunately, it was in good shape during its “vacation” although for its owner it was 72 hours of uncertainty and worry.

Now this cat has become a celebrity in the networks who keeps getting comments for playing in such a funny anecdote.